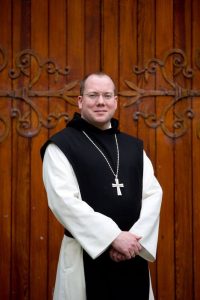 Abbot Richard Purcell of Mount Melleray Abbey, our Mother House in Ireland, spent a few days with us recently and met individually with brothers to talk about life at the abbey and our plans for the future.  As abbot of the monastery that founded us in 1849, Abbot Richard would customarily exercise the role of “Father Immediate” of New Melleray.  However, because Mount Melleray was without an abbot for a time, we were assigned a temporary Father Immediate until the next General Chapter in the Fall.  With his installation as Abbot of the Mother House, the monks of New Melleray are pleased to know he will be functioning as our Father Immediate soon.  Abbot Richard met with the community at Sunday Chapter and brought us up to date on events at Mount Melleray, including a decision by the monks to reverse an earlier decision to move the communal liturgy out of the main church into a smaller guest chapel of the monastery.  A consensus formed and now the monks are back in the main church which is unique for its beauty and eloquent witness of many generations of monastic prayer.  From New Melleray, Abbot Richard traveled west to take part in the Los Angeles Religious Education Congress.  An unusual assignment for a Trappist monk, Abbot Richard was approached by a woman after a mass he presided at in his monastery and invited to California to speak!  Having discussed the matter with his bishop and been encouraged to go, Abbot Richard will speak to Religious Educators about the Rule of St. Benedict and its formative influence in the life of a monk.