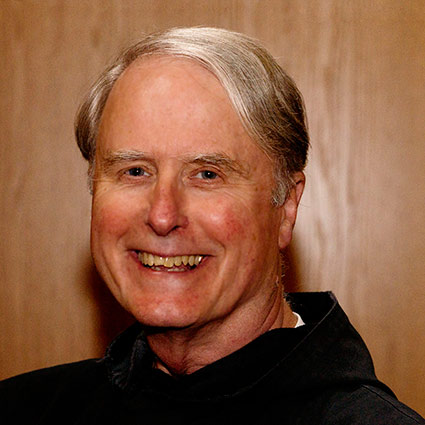 Dom Peter McCarthy of Our Lady of Guadalupe Abbey in Oregon is making a friendly visit to New Melleray this week. The 2017 OCSO General Chapter asked Dom Peter to serve as our “Delegated Father Immediate” until the next General Chapter. Having already committed to conduct the regular visitation at Our Lady of the Mississippi Abbey, he is taking advantage of his time in Iowa to become familiar with our community. He will return this summer to conduct our regular visitation.

Dom Peter’s willingness to serve us and the Order relieves the abbot of Mount Melleray in Ireland of the responsibility. Mount Melleray, our founder, has nine daughter houses. Last year they elected a new abbot. He has his hands full and the General Chapter thought it prudent to give him some help in the near-term. Fr. Mark was consulted during the General Chapter and agreed to the proposal on our behalf.

from Constitutions and Statutes

1. The Father Immediate is to watch over the progress of his daughter houses. While respecting the autonomy of the daughter house he is to help and support the abbot in the exercise of his pastoral charge and to foster concord in the community. If he notices there a violation of a precept of the Rule or of the Order, he is to try with humility and charity and having consulted the local abbot, to remedy the situation.

2. The purpose of the regular visitation is to strengthen and supplement the pastoral action of the local abbot, to correct it where necessary, and to motivate the brothers to lead the Cistercian life with a renewed spiritual fervour.