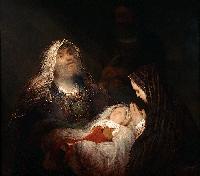 When Zechariah was in the sanctuary of the Temple, the angel Gabriel said, “Your prayer has been heard. Elizabeth will bear you a son.”  The birth of John was an answer to prayer.  But even though Zechariah had been praying for a child, he no longer believed in it when Gabriel announced John’s conception, because Zechariah and his wife were advanced in years and she was beyond the age of childbearing.

There are two lessons for us in this Gospel.  First, keep praying even when the answer to prayer seems impossible, for nothing is impossible for God.  Second, if one stops believing, keep praying because God can answer the prayers even of those who have lost their faith and hope.