Homily for the Annunciation

When a pope or an abbot has been elected, there is always the necessary step of asking them Are you willing to accept this office?  The election is not effective until the person consents.  They don’t ask: Do you want this? Or, Do you think you are capable?  Or, Would you like this?  It is a question of willingness, of surrender to something unknown in all of its consequences.  Gerald May has distinguished willingness from willfulness.  The latter is a matter of control, management, and power.  Willingness has its roots in the infinite.  It doesn’t impose any limits on what may happen.  It is an entry into a space that we would and could not take upon ourselves.  It is a response to having been invited and asked.

When God approaches Mary through the angel, he does not tell her Here is what I want you to do and what you must do.  He asks, Are you willing?  Nor is it a foregone conclusion that Of course she will say “yes.”  How could she refuse?  It is Mary’s free response that makes the conception of the Word in human flesh possible.  The request of God does not suppress or override her humanity. To be the handmaid of the Lord is not to turn into a spiritual robot or have the default mode of blind faith.  It is to be at God’s disposal.  This openness and sensitivity to the movement of God connects a life to the infinite, to what is not possible for the human of itself.  It is a new interdependence which frees us from the belief that freedom means unhampered disposition of myself.  My wants, my rights, my way.  St. Benedict understands the grace of monastic life as no longer having disposition over one’s own will or even over one’s own body.  The grace and gift God offers only becomes real and actual when it is accepted.  And accepted with an openness to wherever it leads. It is God’s gift, invitation, and grace which creates the possibility of our free response.  A 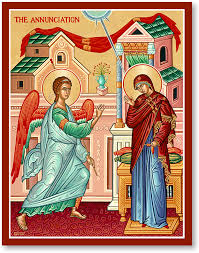 recollection from my youth gives me a bare hint of how this works. The days were approaching Mothers’ Day, and I had no money to buy a corsage for my mother.   She would be the only mother going to church that Sunday without a corsage.  Without my asking, my father gave me ten dollars so that I was able to give her that gift.

One of the aphorisms Bishop Flores left us during his retreat here was If we don’t understand how God works with Mary, we will never understand how he works with us.  He does not bypass or suppress our humanity, but puts it in a new key or register that makes it fully and truly itself.  He puts our humanity into a new relationship with himself.  The scene of the dialogue at Nazareth displays the humility of both Mary and God.  God finds himself in humanity and its limits. Emmanuel, which means God is with us.  We dialogue with him out of our own limits.  Left alone, those limits create loneliness and despair.  With God with us, they become the places of meeting him in the midst of life.  In his synodal letter, Verbum Domini, Pope Benedict XVI wrote: The novelty of biblical revelation consists in the fact that God becomes known to us through the dialogue which he desires to have with us.  The constant questioning which surfaces again and again in our lives is How can this be?  In our willingness to listen, we find the grace of the Word becoming incarnate in our lives.  And we come to acknowledge that nothing is impossible to God.

Homily for the Annunciation 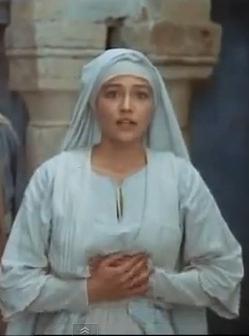 In the Letter of St. James, we read, “Let your ‘Yes’ mean ‘Yes,’ and your ‘No’ mean ‘No,'”like Mary’s consent at the Annunciation.There are some words in the English language that have two meanings the opposite of each other.  You can seed a field, in which case you’re adding seeds, or you can seed a grape, in which case you’re removing seeds. You can alight from a horse to watch a butterfly alight on a flower.  You can clip an article from a newspaper and clip it with other articles.  Even “No”in the phrase “No way!”can mean either a definitive refusal or anenthusiastic affirmation.

Mary, although she was and remained a virgin, believed the Word of God, that she would bear the Son of the Most High by the power of the Holy Spirit. She could have said, “No way!” meaning “Yes, totally.”

But St. James isn’t talking about words with double meanings, like cleave (meaning to cling or to cut off), or sanction (to approve or to penalize), or citation (meaning an award or a ticket).  A deputy sheriff once told Fr. Brendan he was giving him a citation. Brendan wondered why he was receiving an award.  Instead he got a ticket for speeding.

St. James is warning us about lies and dishonesty.  What he says goes to the very core of a person’s character, to the heart of what it means to be a child of God in whom there is no guile, no deceit, no lies. The Greek philosopher,Pythagoras, writes that yes and no are the shortest words in every language, but they require the most intentional honesty and commitment, like that of Mary’s response to God.

Without such integrity, politicians can claim they didn’t lie, they misspoke.  Kids can say, “Cross my heart and hope to die, if I lie stick a needle in my eye.”  But if they cross their fingers they think it doesn’t count.  For teenagers on a date, a giggling “No”may be a shy cover for a stronger interior “Yes.”  Unless the girl really means it and says, “What part of ‘No’ don’t you understand?” 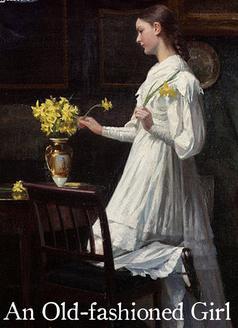 St. James is writing about the kind of honesty and goodness we see in Mary, the Handmaid of the Lord.  Louisa May Alcott illustrates this in her novel, An Old-Fashioned Girl.  Polly Milton, like Mary, is a 14-year-old country girl, who visits her rich cousins in the city.  At first she is simply overwhelmed by their urbanized lifestyles and fashionable clothes and she feels left out because of her countrified manners and plain clothing.  But Polly was so transparent, so honest that she couldn’t even tell a white lie cleverly.  Her goodness, warmth and kindness eventually win the hearts of everyone. She loved to do the little things that others didn’t see, or were too busy to do; and while doing them, without a thought of thanks, she made sunshine for herself as well as others.

I wish I had the simplicity and integrity of the fictional Polly Milton, or better yet, of the very real Mary of Nazareth.  But I’m more like Charlie Brown who said, “Sometimes I lie awake at night, and I ask, ‘Where have I gone wrong’.  Then a voice says to me, ‘This is going to take more than one night.”  And I think to myself, “Oh! No way.”  Which means “Yes, totally.”