Baptism of Jesus at Mississippi Abbey

Imagine Jesus standing at the edge of a crowd listening to John the Baptist preaching, “Repent, for the kingdom of heaven is at hand.” The people are filled with intense expectation of the One who is to come, who will gather the wheat into his granary and burn the chaff with fire.

When John points his finger and says: “You brood of vipers! Who warned you to flee from the wrath to come? [Repent] for even now the axe is laid to the root of the trees…,” he is echoing this prophecy of Malachi, “… who can endure the day of his coming, and who can stand when he appears?” (Mal. 3:2). 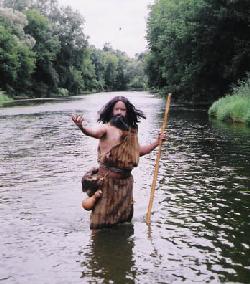 Then an astonishing thing happens. The One who is to come walks into the middle of the brood of vipers, not with winnowing fork and axe, but with humility and mercy, identifying with the people by asking to be baptized with them. No one fell down. There was no fire, no winnowing fork, no axe.

It's not what John the Baptist expected. Later, from prison, he will send his disciples to find out, “Are you he who is to come, or shall we look for another?” What would John have felt and thought had he lived to witness the horrible crucifixion of the Messiah? The fulfillment of prophecy is often very different from what people and even the prophets themselves expect. The prophecy of John was fulfilled, the Messiah had come, but not yet with winnowing fork and axe. Jesus begins with mercy, not judgment; with gifts, not weapons. He comes not as an avenger with wrath but as the Beloved Son of God to save us.

At the Transfiguration we again hear the Father's voice saying, “This is my Beloved Son. Listen to him.” And at the Crucifixion, when the leaders of the people scoff at Jesus, they say, “He saved others, let him save himself if he is the Christ of God, his Chosen One.” Jesus really could have come down from the cross, and saved himself, but we would have crucified him again to be rid of him. Instead he does something much greater to win our belief and love. He dies and rises from the dead and invites us to the kingdom of heaven. How can you get rid of someone who rises from the dead? How can we not love the One who is to come who offers us not the cutting edge of the axe, but the cleansing waters of baptism?

In Vatican II's Decree on Missionary Activity (#15), the baptismal font is described as the womb of the Church. It is where we are conceived as children of God, washed clean and made partakers of the divine nature so that we can have communion of life with the three Divine Persons and all creation in the kingdom of heaven. 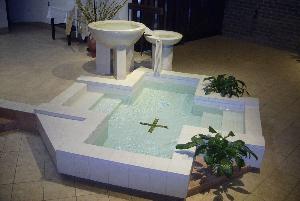 John the Baptist expected the Messiah to come right away with the axe of judgment. And there was an axe, not in the hands of Jesus but in the hands of Herod; and it came down not on the wicked but on John's own neck. Such is God's mercy that not only does Christ give his life to save sinners, but we are also invited by our baptisms to die with him for the salvation of the world.

It is hard to interpret prophecies correctly, and there are many prophecies of wrath today. But let us learn from this, that the mercies of God are far greater than anything we can expect or deserve, for this is the time of mercy. Yet, he will come again, and who will be left standing with joy when he appears?