Conversion of Paul, at Mississippi Abbey

Like the proud, unsinkable Titanic heading full speed toward a giant iceberg, Saul the persecutor went crashing headlong into a rock in the middle of the road that flattened him to the ground. The rock was Christ. When St. Paul describes his experience to the Galatians he does not call it a conversion. He calls it an apocalypse , a revelation. Saul did not need to be converted, for he loved God dearly. He needed a revelation about what he was actually doing to others and about his own need for the grace of Christ Jesus to be saved.

In a short story titled “Revelation” Flannery O’Connor writes about a self-righteous woman named Ruby. She is the bossy wife of a hog farmer, her enormous ego matching her wide girth. Ruby is sitting in the waiting room of a doctor’s office. From the lofty vantage point of her superiority she sizes up everyone’s social standing. There’s a young scowling college girl sitting across from her who is reading a thick blue book titled Human Development, and there’s a gum chewing mother who is clearly white-trash with her dirty six year old child in a soiled blue romper sprawled across the sofa, and there’s a stylish lady next to her who looks quite pleasant. Watching the messy little kid poke a dirty thumb into his mouth Ruby huffs haughtily and says to the stylish lady, “My hogs are cleaner than some children around here.” After she judges everyone by the quality of their shoes, the face of Mary Grace, the college student, turns red from internal rage over the drift of Ruby’s derogatory remarks. Feeling good about herself, Ruby says out loud, “Thank you, Jesus, for everything…” She saw the big blue book coming at her just before it struck above her left eye, followed by the raw, howling voice of Mary Grace saying, “Go back to hell where you came from, you old warthog.” That “revelation” shattered Ruby’s self-complacency and threw her into angry confusion about her state of grace. It was the catalyst for a remarkable change of heart. Later, back on the farm, in the red glow of a sunset, Ruby has a vision of a reversed social order. She sees the white-trash, the crazy people, and the unclean rumbling toward heaven ahead of respectable people like herself. Her shocked face reveals Ruby’s realization that she needs grace to be saved even more than all the others. 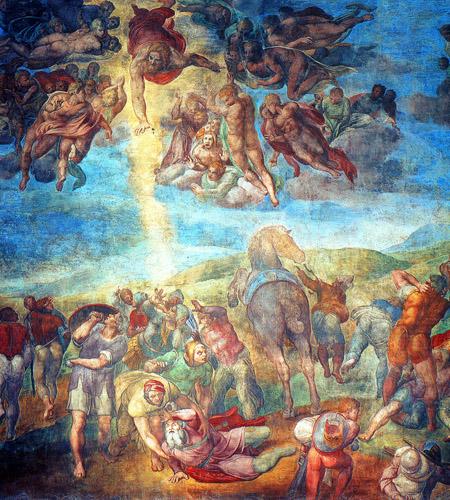 When Flannery O’Connor was asked why she wrote about such bizarre people and events in her novels she replied, “In a deaf world you have to shout,” and maybe throw things. Sometimes grace has to break through our strong defenses by attacking us, just as Saul the persecutor was knocked to the ground on his journey to arrest Christians at Damascus. And just like the people at Nazareth who were also self-righteous. They were expecting miracles, not a revelation about the reversed social order of those who are the people of God. The kids who played with Jesus in childhood, the women who admired his craftsmanship in Joseph’s workshop, the men who prayed with him in Nazareth’s synagogue were amazed that a local boy was making a name for himself by miracles and signs. “Welcome home, kid! Nice going. Do it here in your hometown. Imagine Jesus, Joseph’s boy, doing mighty works. Let’s see what he can do.”

In St. Luke’s gospel and in the Book of Acts Jesus gave the best grace to his own hometown and to Saul, not miracles that come and go, but divine revelation that endures forever: At Nazareth he said, “Today this Scripture has been fulfilled in your hearing.” It was his inaugural address, and they were the first to hear the good news that the time had come to fulfill all the prophecies, just as Saul was the last apostle to get hit over the head with revelation. The people of Nazareth wanted miracles and signs. They were motivated by the first step of pride, self-righteousness and curiosity, not by the first step of humility, repentance and a change of heart. So Jesus gives them a revelation, he throws the book at them, proclaiming that a pagan widow at Sidon and a leprous Syrian general were better prepared to receive God’s healing grace than the people of Israel. The psalmist writes, “If a good man strikes or reproves me it is kindness, but let the oil of the wicked not anoint my head,” . Revelation of the bad news about ourselves, warthogs from hell, prepares us to receive the good news of Jesus, who comes with love to save us. Like the people at Nazareth, Saul had to be knocked down before he could see straight.

St. Bernard teaches that, “Our heavenly Physician does not always treat our moral sores with [soothing] ointment. They may be too infected for that. He may need to cauterize or lance them.“1 Soren Kierkegaard, the wise Danish Lutheran religious philosopher, noted that many great minds of his century devoted themselves to making people’s lives easier by inventing labor-saving machines and electronic devices. But he would dedicate himself to making peoples lives more difficult, he would become a preacher. And Pastor Dietrich Bonhoeffer, who was martyred for his opposition to Hitler, writes that “Cheap grace is the preaching of forgiveness without repentance, communion without confession, and absolution without personal confession, … grace without the cross.“2 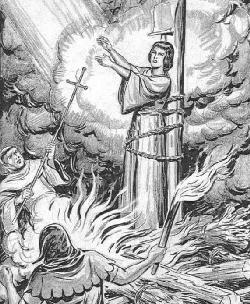 So, Jesus picks a fight, he gives offense. He not only knocks on our door, sometimes he knocks us down, not out of meanness like the misguided teenage college student who tells Ruby to go to hell, but out of love, exposing our sinfulness to prepare the way for repentance and mercy. Costly discipleship begins with revelation about ourselves and the sins we hold so dear and are quick to deny.

Another teenage girl, St. Joan of Arc3, knew that her visions and voices from heaven were no guarantee of holiness. She was inspired to unite France to fight against the English forces of occupation. But the closer God came to her, the more conscious she was of her own failings and the harder she fought against them. When the Court that condemned her to death as a heretic asked if she was in the state of grace, the Maid of Orleans replied: “If I am not, God put me there; if I am, God keep me there.” Revelation taught her humility. Grace did not come cheaply to this girl who was tied to a stake and died by fire at the age of nineteen. Ruby, Saul, the people of Nazareth, and Joan of Arc all have something in common: a hard hitting revelation that drove them to their knees in prayer: “Lord Jesus Christ, Son of God, have mercy on me a sinner.” Being hit on the head by revelation is a grace. Take the bible, let it penetrate your head and fill your heart. That’s Christ’s way to an even greater grace, the ultimate revelation, heaven, and the ultimate prayer, “Alleluia!”