It is normal for us to want closure on issues which involve us. We are happy to have closure on Lent. We don’t want discussions to drag on, and after a while we look for closure. Even the discovery of a body, although it may be tragic and sad, can bring closure to a family that had been missing a person killed in action or even one who had been lost or kidnapped. “At least now we know.” They can again close the circle of their lives and try to find a normal way of living.

We should, therefore, be able to understand the situation of the disciples. The discovery of an empty tomb brought them distress and panic. They had been trying to work through their grief, to come to terms with and put closure to their disappointment. Now, all the questions rose again to the surface, all the wounds were opened again, their sensitivities were raw, they felt they were victims of the “they” who had taken the body. They did not know what had happened. They did not understand the Scriptures that he had to rise from the dead.

But we are in a better position. We have an understanding they didn’t have. We know that Christ has risen from the dead. We publicly profess our belief every Sunday. We have integrated this belief into our patterns of religious thought, into our systems and doctrines. We no longer have to ask “what difference would it make to our lives if Christ had not risen?” This belief helps us to find closure, to know that there was a happy ending to the narrative of Christ and to believe that one day we too will have the same “happy ending, a happy closure.” We can get on with the normal routines of life. 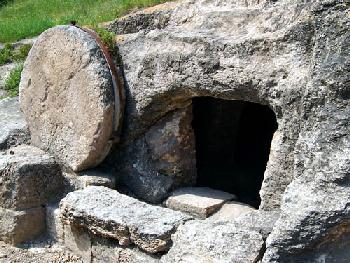 But when we listen and read the gospel attentively, maybe a wedge pries open some of our closed doors. The gospel accounts are not very convincing, not very satisfying. Not much to go on. No footprints or eye witnesses. A stone rolled back, burial cloths, an empty space. Obviously, this is open to a lot of interpretations. Peter and Mary were “there” but didn’t come to belief. Only after the beloved disciple entered the tomb and saw did he believe. He didn’t believe in spite of what he saw. What he saw was essential to his belief. Nor did he come to belief without seeing. But just seeing wasn’t enough, as Peter and Mary could tell you. Seeing and believing describes the intersection of the divine with the human, the life of the glory of God now manifest and operative in the visible realities of mortal life. You can see without believing, but you can’t believe without seeing, without that real seeing which looks beyond the surface. That seeing in which you in fact “lose your self” in the way in which we lose our selves in the presence of stunning beauty, in which wonder overcomes the boundaries which had enclosed our being. The Catechism of the Catholic Church finally describes the resurrection as “an event historically attested to by the disciples; yet mysteriously transcendent in so far as it is the entry of Christ’s humanity into the glory of God.” Humanity and creation are now immersed in the glory of God for those whose eyes are ready to see it.

It seems to me that there are several (3) conclusions we can draw: 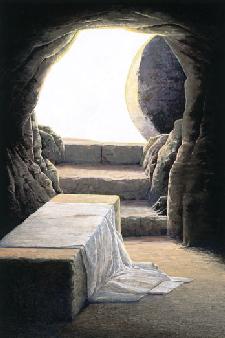 1) The experience of the resurrection is not simply an “inner experience”, a transformation of the minds and hearts of the disciples who took new inspiration from the memory of Jesus. This was not simply an activation of archetypes latent in the human unconscious nor the emergence of undiscovered levels of the transpersonal.

2) It was an exterior event, a totally unpredicted historical occurrence which took place in and through the body of Jesus. But it was of such a nature as to radically and fundamentally transform the content and context of all human and cosmic experience. It has become the permanent source of openness to the divine and the turning upside down off all human norms and efforts to maintain closure. An historic event in the past, it remains present as the hidden norm of all history.

3) Access to this event is offered in so far as one is willing to imitate in one’s own life the same submission as Christ, the same obedience, naked acceptance of the absolute will of the Father who communicates his glory and life through the forgiveness of sins—the path of suffering and death in the flesh.

“They have taken away the Lord and we don’t know where they have put him” Are we so sure we know where they have put him? Or isn’t this part of the resurrection proclamation/kerygma that we can still utter today? It expresses the absence, the loss, the bewilderment, the disappointment, the dissatisfaction we must pass through—out from the many ways we seek to “make sense”, to find security, to find closure. It expresses the tension created by the action of God (who is the “they”?) who is not satisfied with dead bodies, dead routines, deadends, temples or museums where satisfaction is enclosed and enshrined. We are brought to a level of nakedness and poverty which can open our eyes to the action of God. We don’t even need those burial cloths. “We don’t know where they have put him.” Our minds, our theologies, our systems still leave us with an unknowing, 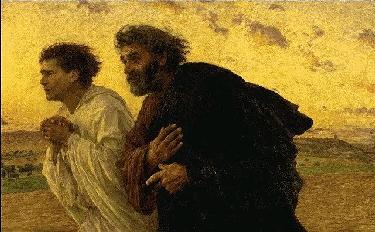 but one which we now prefer to the certainties of hard evidence and closed systems. “The have taken away the Lord and we don’t know where they have put him.” This redirects our attention to the “unpredictable ubiquity of Christ” as one scripture scholar has said. This expresses our loss, our open-endedness, our dissatisfaction, our hunger to know, but it also expresses a truth in which we find life, hope and movement into the darkness and emptiness of the tomb where God reveals his love and glory.