Easter Vigil in the Holy Night 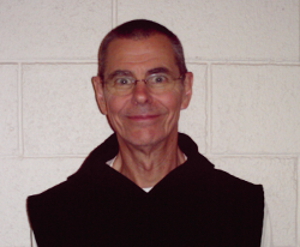 “Whom do you seek?” The question was repeated in the narrative of the Passion that was read on Good Friday. “Jesus of Nazareth,” they answered. The same question, “whom do you seek,” is implied in the two Marys' going to the tomb. Whom do they seek? They don't dare say or even think it. “They went to gaze upon the tomb” is all they can manage, and even this do not put into words. It is the angel who gives voice to their question: “I know that you are seeking Jesus, the Crucified.”

Each of us, by the fact of our being here tonight, is asking a question. We each are seeking a whom or a what. Whom do we seek by being here? The angel knew the women's quest. Who will tell us ours? It is comforting to know that someone can. Maybe if nothing else, we can take from this night that someone knows and can tell us what we seek.

“Jesus, the Crucified. He is not here. He has been raised.” An astounding claim that never could have been of human invention. Jesus the Crucified: the grammatical form of that statement necessarily means a state that continues into the present: He was crucified on Friday; he is still Crucified. He is Jesus, the Crucified One. And yet, raised. This means living in such a way and having life to such a degree that what we understand by life loses all meaning. Raised. It is the abundant life of the Kingdom of God, the eternal life of metaphor made real. Jesus, the Crucified One, is the Living One. It is him you seek, it is him we seek; but he is necessarily not “here” because our “here” is too small and too dead to contain him; he is always ahead of us, but never leaving us, either.

We note that whatever it was that made the Crucified raised happened before the women arrived, before the stone was rolled away, before the angel came, and before the guards became as dead. Almost all our Easter art falsifies the honesty of the Gospel accounts, even the picture on the front page of this week's Witness [newspaper of the Dubuque archdiocese]. No one witnessed the Lord's being raised. The earthquake merely signaled that something to shake and upturn all normalcy and expectation had taken place unobserved and out of time: the Crucified is raised, and those who thought they were alive, like the soldiers, like us, are by comparison to him as dead men.

The women had come, they thought, to gaze upon the tomb. The angel accommodates them in a way they probably didn't like: “see the place where he lay”; past tense, because he is not “here.” Their world, even their hope, is empty. They do not find what they seek, Jesus the Crucified.

Instead, and all consistent with the Resurrection, he finds them: “and behold,” it says, “Jesus met them and said, 'Greetings.'” On their own they could never find the Risen Crucified One by looking in the “here” of what they had always found reliable. Their here no longer works.

We have come here seeking. Whom, what, do you seek? Let it go; it, he, will find and greet you. Our reading from Romans says it so bluntly: our old man—our old self—is totally obsolete in face of the newness of life of the Resurrection. Baptism and the profession of faith are the mystical and real dying and rising with the Crucified and Risen One. Our life, our “here,” is cooped by Life whose here is everywhere, and we are sent there bearers of good news, justice, and mercy.

What did the Marys think when they were found by whom thy sought, when their irrelevant here was absorbed by Everywhere, when nothing any more could, would, be the same?

which was not even
the first of the changes

nothing surprising in that

and nothing surprises you
who were always there
wherever it was