Feast of All Saints at Mississippi ABbey

Homily for the Solemnity of All Saints at Mississippi Abbey

After Charlie Brown’s team lost another baseball game he was so depressed that he went to Lucy and paid five cents for her psychiatric help. She said: “Adversity builds character. Without adversity a person would never mature and be able to face up to all the things that will come later in life.” Charlie asked, “What things?” She replied, “More adversity.” St. Paul tells us it is “through many tribulations that we enter the kingdom of God” (Acts 14:22). St. Peter was crucified upside down, St. Lawrence was roasted to death on a gridiron, St. Maximilian Kolbe took the place of a fellow prisoner in the concentration camp of Auschwitz and was condemned to die by starvation, and more recently our Trappist martyrs of Algiers were beheaded.

St. Edith Stein received the gift of conversion to Catholicism when she witnessed a friend being transformed by another type of martyrdom. Edith Stein was an atheist at the time her friend’s husband died. Frau Reinach had been a radiantly happy wife. Edith expected to find a broken, hopeless widow. But Frau Reinach’s painful blow was met by an ardent transforming faith giving her the strength to stand tall in the face of such adversity. Edith writes, “For the first time I saw before my very eyes the Church born of Christ’s redemptive suffering, victorious over the sting of death. My unbelief was shattered.” She became a Catholic, joined the Carmelites and became St. Teresa Benedicta of the Cross.

The universal call to holiness sometimes ends in the gift of martyrdom, but it doesn’t begin there. The Beatitudes end with suffering, persecution and death for the sake of righteousness. But they begin with the poor in spirit, the meek, the merciful, the clean of heart, the peacemakers. These beatitudes are only painful to the sensitive skin of ambition, greed, pride, self-righteousness, impurity, and vengeance.

The Dominican theologian, Fr. Edward Schillebeeckx, described his experience of the simple, unpretentious holiness that is within reach of every person. After receiving the novice’s habit, he wrote a boastful letter to his parents about his daily sacrifice of rising in the middle of the night to praise God and intercede for the world. In reply, his father wrote that he too had known the midnight office—the many sleepless vigils he and his wife had spent caring for him as an infant, and, after him, all their other children.

The Eight Beatitudes can purify even our most ordinary experiences. Once a young boy at summer camp received a box of chocolate-chip cookies in the mail. He put the box on his bed, but later it was missing. That evening the camp counselor 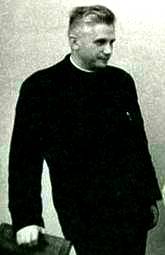 happened to see the boy who stole the cookies eating them. Next day the counselor went to the victim and said, “I know who took your cookies and I will tell you who it is, but I want your help to teach him a lesson.” The boy agreed. Giving him a new package of cookies, the counselor said, “The one who took your box is down by the lake, sitting on the bench. Go down there and share these with him.” The boy protested, “But he’s a thief. Aren’t you going to punish him?” He replied, “Wait and see, just do what I ask.” So, the boy did as he was told. Half an hour later the counselor saw the two boys coming up the hill, arm in arm. The lad who had taken the box was earnestly trying to get the other boy to accept his jackknife in payment for his theft, and the victim was just as earnestly saying that a few crummy cookies weren’t that important anyway. The counselor was a peacemaker, the thief was penitent, and the victim was merciful. All three grew a little more holy and happy in these Beatitudes.

By his passion and death Jesus bore the black soot of all our sins and washed them away. By his wounds we are healed. In this Eucharistic sacrifice we celebrate the victory of all the saints who united their adversities with Christ’s martyrdom. Let us not be afraid of the hot waters of the Beatitudes. They keep us clean and prepare us not only for more adversity but ultimately to be clothed with the white robes of eternal glory and happiness.