Feast of All Saints of the Benedictine Family

Feast of All Saints of the Benedictine Family

Among all the saints we honor today, St. Gertrude is one of the greatest mystics who lived according to the Rule of St. Benedict. As an orphaned child of five she was entrusted to the care of nuns at Helfta, in Germany. It was a fervent community founded by Cistercians in 1229, near the time when Gertrude the Great was born. She lived almost her entire life in the Abbey. At the age of twenty-five, Gertrude began having mystical experiences that are recorded in her Life and Revelations. Two hundred years before St. Teresa of Avila experienced the piercing of her heart by a spear of divine love, and three hundred years before Christ revealed his Sacred Heart to St. Margaret Mary Alacoque, this young German nun experienced the piercing of her heart with the wounds of divine love and was shown the Passion of the Sacred Heart of Jesus. Gifted by Christ’s love with these exceptional mystical graces, she carefully responded with her human love in the normal Christian way by regular Lectio Divina, fervent personal prayer, and participation in the Liturgy—which are at the heart of our Cistercian spirituality.

In her first vision, Christ appeared to Gertrude in the form of a handsome youth about sixteen years old, attractive to heart and eyes. But there was an impenetrable hedge representing her sins and faults separating Gertrude from Christ. Weeping over her sins and infidelities, she suddenly found herself gracefully lifted over the hedge by Christ’s arms and gently placed next to him. Then she saw his wounds, especially his pierced Sacred Heart. During her first year of mystical prayer Christ imprinted his sacred wounds on her own heart so that she would come to know both his grief, caused by the evil of so many sins, and the depth of his forgiving love. Throughout the next twenty years of her life, Gertrude shared in the sufferings of Christ by almost continual illness, severe enough to prevent her from coming to choir for months at a time. She offered her sufferings especially to help those in purgatory.

St. Gertrude writes that before she received these visions, she had given as little thought to her interior life as to the interior of her feet. Then, after becoming a mystic, she redirected her love of learning to focus on the Word of God and the Passion of Jesus. She frequently said this prayer: “Teach me, O dearest Lord.” She writes that, “No one ever looks at a crucifix with devotion except by the inspiration and grace of God, nor does anyone ever look at a crucifix devoutly without receiving some great benefit.” Gertrude was convinced that the revelations she received were not for her benefit alone but even more for the benefit of others. She often prayed: “O Lord, how may my sisters share this grace?” For none of us ever go to heaven alone. We help others or we hinder them.

In Book Three of her Life and Revelations she records a promise concerning the moment of death that is immensely consoling. Christ said: “When I behold anyone in their last agony who has thought of me with pleasure, or performed any works deserving reward, I appear at the moment of death with a countenance so full of love and mercy that he or she repents from the inmost heart for ever offending me, and is saved by this repentance.” 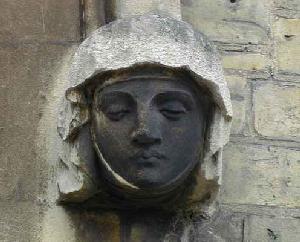 Gerard Manly Hopkins quoted this promise in one of his poems as follows:

To him who ever thought with love of me
Or ever did for my sake some good deed
I will appear, looking such charity
And kind compassion at his life’s last need
That he will out of hand and heartily
Repent he sinned, and of all his sins be freed.

In her spiritual exercises (Exercises of St. Gertrude) St. Gertrude the Great writes about her practice of dedicating certain days each year to renew important anniversaries: especially her baptism, her reception of the religious habit, and her profession and final consecration by solemn vows; and she also dedicates other days to increasing her spirit of compunction, love and gratitude. Encouraged by her example and teaching, may we also grow in our personal love for Jesus, following in the footsteps of all the Benedictine and Cistercian Saints we celebrate today.