Feast of All Saints of the Order, Benedictines and Cistercians

Feast of All Saints of the Order

In the history of New Melleray there are monks whose holiness has enriched our Benedictine/Cistercian heritage. Many were great men of prayer, others bore sufferings patiently, some were ornery and difficult, others friendly and cheerful, some industrious, others lazy, some tidy and neat, others not so clean, some full of wisdom, others had strange ideas. All of them rose above their fallen natures with generosity, self-sacrifice and love to become saints because they were branches on the true vine. For, apart from Christ we can do nothing.

I remember Br. Conrad, a monk of New Melleray for 39 years. Growing up in County Cork, Ireland, he liked to walk barefoot through every puddle on the dirt roads, but he didn’t like to attend Stations of the Cross as was the Irish custom every Good Friday. His sister reproached him saying, “Even crippled people go to Church today!” That boy became a monk of deep prayer. Asked for advice he gave it in two words: “Pray more.” In 1947, an article appeared in the Denver Register saying, “Br. Conrad of the Trappists of New Melleray Abbey has an idea that may save many souls. He suggests that the act of contrition be printed on the back of every airplane seat, so that when disaster threatens passengers may have an opportunity to express sorrow for their sins.” Goofy, perhaps, but Br. Conrad was a branch on the true vine. He had his eyes fixed on heaven.

Then there was Br. Ignatius Brady, an oblate for 56 years, nicknamed “Benedict Joseph Labre.” Writing about him Br. Ailbe said, “…he deserved the name. I suppose Ignatius never had a bath since his mother gave him one. His beard stood straight out in bristles. He wore a smock that came to his knees. What its original color was no one could tell. Under the smock he wore pants that were a foot too long. The front was slit open to give freedom to walk and the rest trailed on the ground after him. When it rained you can imagine what it was like. His ideas of poverty and humility were exaggerated but very sincere. Some made a scapegoat of him. He had a cancer on his nose and suffered a lot from it. He could not stay in bed at night because of the pain, so he would take a pillow under his arm and lay down in a corner of the cloister or chapter room to sleep when he could. He refused to have an operation, saying he would do his purgatory in this world. If the pain became too bad he walked to Dr. Shiels office in Bernard to get some pain killers. In all probability the suffering would have become more than he could endure, but he caught pneumonia and died in a very short time.” Br. Ignatius was connected with the true vine, sharing in the redemptive and purifying sufferings of Christ’s own life.

I’ll never forget Br. Joachim, the humble and happy guest house porter, always ready with a story to tell for the amusement of guests? In the days when women were not allowed inside the monastic enclosure he teased them saying it was because they couldn’t keep silence. Once a group of women were gathered around him, talking and enjoying his company. Passing by, another monk took in the familiar scene and said, “Br. Joachim, blessed are you among women.” One of his favorite stories was about a lady named Mrs. Hunt who found $100 in a money clip on the church floor. Helen asked the pastor to announce it next Sunday. So, after his sermon, Father said, “Whoever lost a money clip in church last Sunday can go to Helen Hunt for it.” Like a fruitful branch, Br. Joachim radiated the joy of Christ’s own life.

Br. Camillus was a monk from 1887 to 1951. He grew up in a sod house in Missouri, joined New Melleray at the age of 21, and became farm boss. He wore cowhide boots, an old gray slouch hat, and a heavy black beard. They said, “It is hard to get along with him, and harder to get along without him.” In his lifetime he saw our farm pass from oxen and horses, to steam engines, and then to gasoline tractors. Once a horse ran wild with him, fell, and crippled Camillus for life. He often stayed up late mending a harness or later repairing an engine. In his eyes a fire was always burning. When serving Mass, if the communicants didn’t hold up their chins when receiving the host he would reach out and tip it up for them. The burning desire of Christ for the glory of the Father was in his eyes and in his hands.

Fr. Bernard McCaffrey, a founder of New Melleray, had such a reputation for holiness that the town of Bernard was named after him, and people took earth from the top of his grave, claiming it cured many illnesses. Curious, one of the monks watched them, and discovered they were taking earth from the top of Fr. Bernard Martin’s grave by mistake. I guess they were both saints. Fr. Bernard hated cold weather. One winter he got into a lazy snake like torpor and lived chiefly in his couch. He liked to grow tobacco and showed off his patch with pride to Dom Bruno Fitzpatrick who hated it and said, “Martin Luther, Henry VIII, and tobacco fell upon Europe at the same time!” It was Bernard McCaffrey who suffered the wrath of Bishop Hughes of New York who humiliated him saying, “Your Order does no good either for yourselves or anyone else.” McCaffrey remained silently submissive, bowed respectfully, and got the heck out of the chancery. Dom Clement Smyth praised him saying, “Oh, happy disposition that could despise being despised and meet humiliation with a smile.” McCaffrey was part of the vine, drawing strength from Christ’s own silence when humiliated by high priests and kings.

My favorite New Melleray saint is Br. Julius Mauriffe, a French count. Visiting Mount Melleray in 1833 he was so impressed by the monks’ simplicity and austerity that he gave up his wealth and joined them. Seventeen years later he was asked by Dom Bruno to go to the new foundation of New Melleray. So, for the second time in his life, this rich young man who had already given up all his possessions to follow Christ, left his home again to go to another foreign land out of love for Christ. There were no dead twigs or leaves on his branch. He was rich with the life of Christ.

There are so many other monks whose stories encourage us: like Abbot Bruno Ryan who taught, “Always be grateful for your vocation, and show your gratitude by perseverance.” Or Dom Philip O’Connor who was always so gentle and kind. And Fr. Maurus whose favorite prayer was “Dominus est,” “It is the Lord” who is guiding us in every event. Or Fr. Pius, who told visitors, “Every day, yes, every day I be thinking about going to heaven.” And Fr. Placid Magee who used to tease his friend Br. Ailbe from Ireland saying “…the Irish were civilized at one time all right, but they lapsed back into barbarianism.” Or, Br. Robert Martin who could never remember if he had been to holy communion, but knew the names of baseball players and their batting averages for years back. And Br. Timothy Westmeyer who patiently endured paralysis for 25 years and once saw his guardian angel, but was outspoken and critical. When asked if one of these monks was a saint he replied, “Brother, don’t make me laugh, I have a cracked lip.” Fortunately, the pruning knife for the vine is in the Father’s hands, not ours. Or else we might cut away the ornery, difficult, lazy, critical, unclean, moody, and goofy members we live with, thinking they are dead wood. But God, who sees the heart, knows the green wood from the dry, and who are becoming saints by drawing life from the true body and blood of Christ Jesus our Lord. 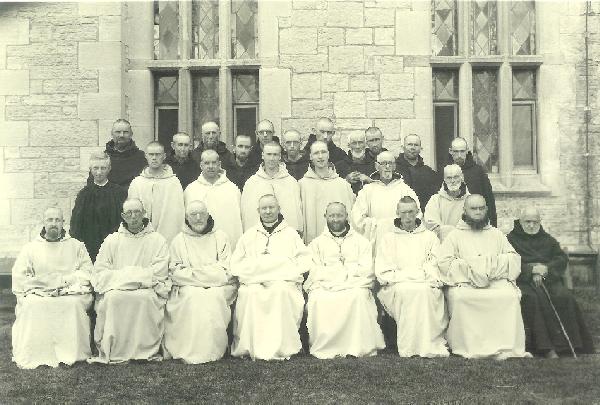