Feast of Our Lady of Guadalupe

St. Therese of Lisieux once described herself as a grain of sand, and she wanted to become even smaller, like an atom that only the eyes of Jesus could see.

Centuries before St. Therese of Lisieux was born, St. Juan Diego was already practicing the humility of spiritual childhood. He said, “I am a nobody, I am a small rope, a tiny ladder, the tail end, a leaf.” What can you do with a short piece of rope? What value does a leaf have? 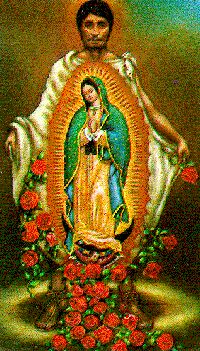 Well, practically nothing. Compared to broad jumping, one little step is nothing at all. But, we can walk thousands of times farther than the greatest distance anyone can cover in one mighty broad jump. It is by our ordinary repetitious acts of humble obedience, poverty and chastity, of silence, kindness and generous service done every day with love that we please God and become saints.

Mary herself practiced the humble, ordinary way of spiritual childhood. “Behold, I am the handmaid, the servant, the slave of the Lord.” And she continues to live in this humility, inservice and kindness to others. How else can we explain the miracle attributed to Juan Diego that led to his canonization? The miracle happened on May 6, 1990. A drug addict named Juan Jose Barragan Silva gave in to despair. In the presence of his mother he stabbed himself with a knife and then staggered to a balcony 32 feet above the street to throw himself over. His mother, Esperanza, tried to grab him in a desperate attempt to prevent his suicide. But he struggled free and jumped over the railing plunging to the ground below, striking head first. When he jumped his mother called on blessed Juan Diego saying, “Save this son of mine!” Then addressing the Blessed Virgin she prayed, “And you, my Mother, listen to Juan Diego!” Mary did.

The young man was rushed to Durango Hospital in Mexico City, not yet dead. Suddenly he was instantly and completely cured. The doctors described it as “unheard of and inconceivable.” Pope John Paul II approved this miracle and it led to the canonization of Juan Diego in July, 2002.

May the example of Our Lady of Guadalupe, the handmaid of the Lord, and of St. Juan Diego whom she called the littlest of my children, encourage us to walk along the humble way of spiritual childhood.