When I was about sixteen, a pop singer named Don McClean recorded a song that became very popular for a few summers, called “Starry, starry night”, a song inspired by the tragic life of Vincent Van Gogh. It had a haunting melody, and the lyrics portrayed Van Gogh as a sort of Christ figure; a righteous man who suffered and died for the unrighteous. At the time, this would have been about 1972, I played guitar at the young people's guitar mass, at St. Martin De Porres parish outside of Detroit, and I managed to teach myself to play “Starry starry night”. One day at practice, I sang it for Fr. Norm the hip young priest at St. Martin De Porres, and he suggested I might sing it as the Com- munion Song some day at Eucharist. A few weeks later, singing “Starry starrry night” in front of a few hundred people at St Martin's ten o'clock Sunday Mass, I remember seeing an elderly woman sitting several rows back scowling, and I remember how confident I felt that any objection she might have to the Communion Song must be a personal problem, because Fr. Norm, my friends and all the adults I knew were sure the idea was an inspiration from God. Actually, in those days, most of the grown ups I knew behaved as if we teenagers at St. Martin DePorres were the finger of God moving through history. It seemed, all we had to do was be ourselves, and just about anything we came up with was received by the adults as the breath of the Holy Spirit renewing the church. My friends and I, liked being disciples of Jesus Christ. It was easy and it was fun! Forty years later, I reflect sometimes why it's all so much more difficult today. 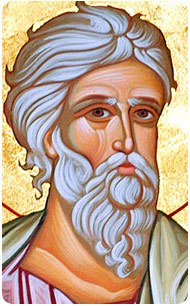 When we look back on some of the attitudes and behaviors of Catholics during the seventies, we can have a strange impression—and yet, the gospel for this Feast of St. Andrew suggests that my kooky experiment with the Communion Song in 1972, might have actually reflected an aspect of genuine Christian discipleship evident in the earliest days of the church. On this Feast of St. Andrew, the gospel proclaimed invites us to reflect on the call of St. Andrew and on the nature of authentic Christian discipleship. If St. Andrew's experience is any indication, my teen-age friends and I may have been on to something in our intuition that you make a beginning as a disciple of Jesus Christ by just being yourself.

In today's gospel we meet Jesus' first disciples—not as followers of Jesus, but as fishermen. Andrew, Peter, James and John were men whose life and livelihood was fishing. On the day Jesus meets them, they are intensely absorbed in the practice of their trade which it would seem they must now forsake and become radically changed people and yet, the call to discipleship, when it comes, is a call—to be fishermen. Jesus says “Come follow me. I will make you fishers; fishers of men.” This call from God arriving as a confirmation of the person one already is, is a scenario we are familiar with in the bible. What was the call of Moses but an affirmation of the deepest desires he already harbored in his heart: to be liberated from slavery, to promulgate a law and, in the company of his people, to inhabit a fertile country where they would establish a homeland. Mary's call on the day of her Annunciation corresponded profoundly to what was already the deepest desire of her heart—to be a mother, and the even deeper desire of every Jewish woman—to be the mother of the Messiah. The enthusiasm of my teenage friends and I for novelty and our hope of realizing a unique destiny was not something that needed to be amputated in order for us to become followers of Christ. The early days of our discipleship were given a distinctive shape by the profoundest aspirations we already cherished in our hearts. As odd as some of our experimentation may seem today, it was a beginning of true discipleship, and many disciples before us made a beginning in this same way.

And so, for me, today's gospel is cause for rejoicing because it seems to affirm my own beginnings as a disciple. But the word of God always cuts like a two edged sword, and there is an edge to this gospel that is not so affirming.

Servais Pinckaers, an internationally esteemed Catholic moral theologian has offered a word of caution to us who came of age in the church of the seventies; the church given over to the renewal inspired by Vatican II. Pinckaers suggests that my guitar mass days at St. Martin De Porres represent what might be called the “humanist stage” of Christian faith and discipleship. At this initial stage of growth in Christ, a person is profoundly affirmed for who he is; affirmed and encouraged in those desires which are most his own and which define him as a person. And so, Andrew and Peter, who were fishermen, “left their nets” only to become fishermen with a fullness and to a perfection they never dreamed of. 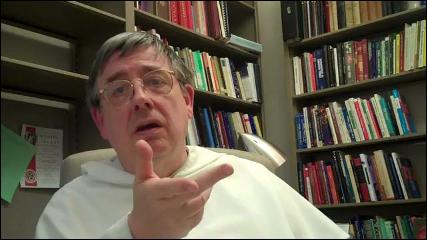 As the gospel continues, however, we see reflected what Pinckaers calls the second stage of Christian faith and discipleship: the stage of separation, solitude, of testing and suffering. Jesus, coming upon two other brothers, James and John, sons of Zebedee. Invites them to follow him, and we are told that, following him, they immediately left their nets, their boat and . . . their father. Now, it is one thing to leave behind the nets one used to practice one's trade, it is quite another to leave behind the father to whom you owe your very life, your childhood formation, and significant aspects of your personal identity. Here then, are two stages of faith: the first in which the deepest desires and aspirations of a person are affirmed by God and raised up to new never imagined expression, and a second in which we are separated, divested of things we cherish, and tested by the experience of misunderstanding, rejection, and isolation.

Pinckaers cautions us today to be reflective about the demands of this second more mature embracing of Christian discipleship. He suggests we may need to more consciously embrace its demands as a call to love and fidelity that will expand our hearts and make us true disciples, sharing in the dying and rising of Jesus so that like St. Andrew, we might show Christ to our contemporaries in all the resplendence of his self-sacrificing love.