In the gospel, Bartholomew is called “Nathaniel.” He is described by Jesus as “a true child of Israel. There is no duplicity in him.” ‘A ‘true child of Israel’ is a member of the people of God. The only requirement for membership, it seems, is a lack of duplicity or, to put it positively, that one’s heart is set on One Thing. Now that’s love! 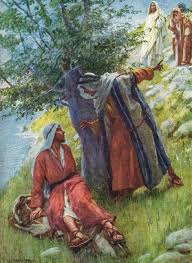 To love what we can never lack, St. Bernard tells us, is what we are made for because we have souls that are immortal. Immortality, Bernard says, is the second element in the Image of God.  Our souls are made to rest in One Thing that will be available to it for eternity. To rest our souls and set our hearts on something that will wear out in time is to open it to fear, rivalry, and discontent. These, Bernard says, compromise our freedom which is the third element in the Image of God. Freedom becomes covered over by necessity; the necessity to protect ourselves from adversity. Jesus does not feel that necessity.  He does not trust God to preserve him from adversity; He is, instead, willing to endure it if it is part of His mission from the Father. Now that’s love!