One day, many years ago, sitting on the beach by the ocean, my family and I were suddenly startled by the sound of a woman screaming. “My baby! My baby! Oh, my poor little baby — he’s out there!” she cried, gesturing frantically toward the waves, by all appearances, completely out of her mind with grief and panic. Everyone on the beach stopped what they were doing and stared dumbly at the bereaved mother and then at the waves. Several men, without a word to the woman, threw themselves into the ocean, and were thrashing around in the surf, searching for the little boys’ body, a group of woman gathered to console the mother. Someone called the police.

A few minutes later, this gut-wrenching scene, was happily transformed when a seven year old boy appeared; walked up to the distraught woman and said, “Hey mom! . . . what happened?” Her little boy, it seems had returned from the dead—or to be more accurate, had from a stroll he had taken down the beach without telling his mother who, for some strange reason, when she wasn’t able to locate him, decided he simply must have been swallowed up by the ocean and drowned, and then began shouting like a lunatic; scaring the living daylights out of about two hundred other people.

As we settled back down onto our beach blanket, my family and I discussed together whose behavior was that strangest on the beach that morning: the woman’s, who discovering her son missing instantly drew the most horrible conclusion possible or ours, who listening to her ravings, without evidence or any questions asked, believed herinstantly.

How is it we are so ready to believe the most terribly bizarre things, without questioning, and at a moment’s notice?

Not so long ago military experts had us believing that the Soviet Union was in the process of building a military capability which in a few years, would insure their unchallenged rule over the whole earth. More recently, Saddam Hussein was believed to be harboring weapons of mass destruction; determined to use them in a diabolical plan to destabilize the world order. We had proof. A former official of Saddam’s regime, granted asylum in the U.S. told us on a popular talk show about actual encounters with members of Saddam Hussein’s family; how one of Saddam’s son’s seemed not to have a human conscience, and as a small child, used to enjoy torturing dogs.

We listen to this stuff; we take it at face value, then imagine we are looking at a picture of reality, and with minds misguided and confused, we live in fear. 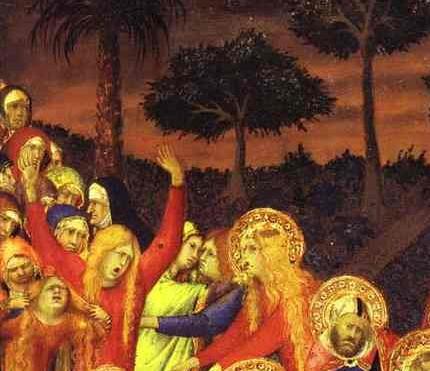 Mary, in today’s gospel, arriving where the disciples are gathered, rushes into the room shouting: “Come quick – can you imagine! Somebody stole Jesus’ body! It’s true! Someone broke into Jesus’ tomb and took his body away! Isn’t it awful! Nobody has any idea where they put him!” Interesting suggestion. Where did Mary get all this? Is it true? Did evil men break into Jesus’ tomb and take away his body? Listening to her, you might believe for a minute, she actually knew what she was talking about. But, where did Mary get her facts? The next thing you know, John and Peter are running, running as fast as they can to the tomb. And what do you suppose they are thinking as they run? What confused and fearful imaginings must be stirring in the two disciples minds at this moment, because when a person terrified by dark fantasies decides to share them publicly, that person’s fear spreads and thickens, and complicates the lives of everyone who hears. But then, what must be John’s and Peter’s thoughts when they arrive at the tomb; and actually see the stone rolled back and Jesus’ body – missing? Has Mary’s story been confirmed? Does the sight of the empty tomb confirm for them and for posterity, that we are justified in suspecting the most fearful thing imaginable? How often our collective craziness, is confirmed by just this sort of “proof”. How easily Peter and John, peering into that horribly empty tomb, might have given themselves up to despair and bitter cynicism concerning God, human nature, and the future of the world. But what did happen? John arrived first at the tomb. The scriptures say, he went in, saw, and – “believed”. It does not say “he believed Mary”, and I guess we can all be thankful for that. The Christian religion would look different today if he had. “John“, the scriptures say, “went into the tomb, saw – and believed.” Believed, in spite of the terrifying report he had heard; in spite of the desperation and panic of those around him, believed in something greater than the human heart sick with fear. John let his eyes peer deep into the darkness of that empty grave; saw God looking back, and believed he was witnessing the greatest manifestation of love history had ever shown to human eyes. May our good brother John be with us all this morning and give us eyes like his that can look into the empty tomb of doubt and despair we all carry within us, and see there the power of God changing death into life; restoring hope; banishing all senseless fear, and making manifest that love which was John’s glorious destiny and the destiny of all who with him—believe.