Homily for the Feast of St. Matthew

Unless I am being exposed to false reports from the media, disagreements and conflicts are universal phenomena. Wars and other armed and unarmed conflicts are prominent in the international news. Political arguments can be taken for granted and will increase as we approach the national conventions and more intense political campaigning. Within the Church the pros and cons of the new translation of the Missal can be added to the ongoing liberal-conservative debates. Against this background St. Paul’s appeal for unity that we just heard while attractive may also seem unrealistic.

Unquestionably the unity we are called to as Christians is an ideal. As such it is always before us as a goal toward which we work. That does not mean that it is an unrealistic goal to which we perhaps pay lip service, but do not really expect to experience. Like the poor conflicts and disagreements will always be with us, but that is not an excuse not to work to establish peace and harmony. We are all called to contribute to the Church as the sacrament of the kingdom of God, and one of the signs of God’s kingdom is the unity of its members. This is not an external uniformity that we devise. We are called into the unity of the body of Christ, which is brought into existence and sustained by the Holy Spirit. 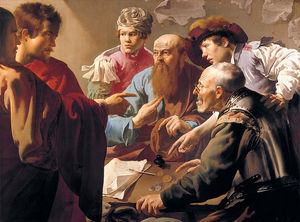 A definition of Catholicism attributed to James Joyce to which I am attracted is: “Here comes everybody.” If we belong to a church that welcomes everybody, we will need to be prepared to associate with people we would not choose to associate with on our own and perhaps will be uncomfortable associating with. Jesus Christ came to call sinners and sinners can be a difficult group of people to get along with.

A number of sayings in the New Testament make it clear that tax collectors were looked down on in Jewish society at Jesus’ time; and the disciples may have been less than enthusiastic about receiving a tax collector into their company. Nevertheless, Jesus called Matthew to be one of his close companions and then went so far as to share a meal with other tax collectors and sinners. The disciples came to accept this, but the Pharisees did not. Jesus’ willingness to associate with those his society considered undesirable was a criticism that followed him throughout his ministry. When we look around at our communities and parishes, how do we feel about the people Jesus calls us to associate with? In a church that welcomes everybody there will necessarily be differences and disagreements. Not to expect that would be unrealistic. However, are we willing to approach our differences and disagreements according to the ideal of charity and unity to which the Holy Spirit calls us?

“Who, me?” In the Church of San Luigi in Rome there are three paintings by a sixteenth century artist, Michelangelo Merisi da Caravaggio, about the life of St. Matthew. The first is his call; the second is his Divine Inspiration of the Gospel; and the third is his martyrdom.

Caravaggio was a leader in the artistic movement away from idealistic portraits of people so common in the Renaissance area to paintings of people as they really are, very ordinary looking. In the first painting, Levi the tax-farmer, is seated at a customs table with four assistants, counting the day’s income. Christ enters with Simon Peter and stretches out his right hand toward Levi in exactly the same way that Adam’s hand is stretched out toward God on the ceiling of the Sistine Chapel, symbolizing that God has become man and now reaches out to us with human hands like our own in divine friendship. Only two words break the silence of this dramatic moment in the history of salvation, “Follow me.” The presence of Peter is a reminder that we are called to follow Christ not alone, but together as a Church founded on a secure rock, in a saving unity with all Christ’s disciples. 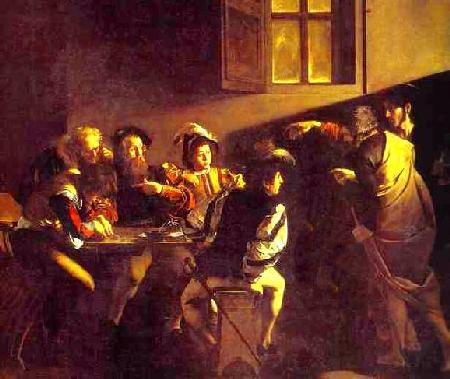 Levi, surprised by this intrusion into his space, draws back in his chair, and gestures toward himself with the index finger of his left hand as if to say, “Who, me?” At the same time his right hand is still on the coins he was counting before Christ came in and said, “Follow me.” Many questions might spring up to delay a response: “Are you calling me? Where? For how long? What can I take along? What will I be doing? What will I receive?” But Christ’s call is immediate, “Follow me,” now. He did not sit down to answer every question Levi might have. The answers will come later, while Levi is following Jesus. Right now Levi’s feet must decide the direction of his love. The mixture of selfishness and selflessness, his ambiguous motives, can be sorted out later. The call rings out in the air, “Follow me.” It is a call everyone there could hear. But not everyone will push the chair out of the way like Levi and start heading out the door with Christ.

Caravaggio’s painting shows two adult figures on Levi’s right. They are the furthest away from Christ and Peter on the opposite side of the painting. These two men recall a fifteenth century painting of two gamblers so distracted with their avarice that they are unaware of the approaching presence of death. In Caravaggio’s painting these two men are so preoccupied with counting the tax collection that they do not hear Christ’s call to new life. Their inattention robs them of the opportunity to get up and leave everything else behind for the sake of following Christ. Two boys are painted on Levi’s left, between him and Christ. The younger one leans back against Levi as if to prevent his leaving. The older swaggering boy, sitting on one of our refectory stools, leans forward menacingly, a sword ready at hand on his belt. Peter looks at him and points with the finger of his right hand, “Don’t even think of it!” The hand of Peter is quite like the hand of God on the ceiling of the Sistine Chapel, perhaps symbolizing the divine nature of the Church, the divinization of all Christians. 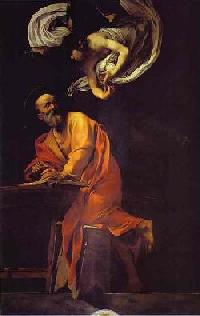 The call, “Follow me,” rings out for all to hear. Jesus did not say, “Levi, follow me.” His call filled the whole room, indeed the whole earth, “Follow me.” If the other four in that room had gotten off their backsides and headed out the door with Jesus, Peter and Levi, all of them could have become disciples. Latter many will. But now only Levi takes the call personally, “Who, me?” He alone rises to follow the barefoot Christ, leaving riches behind him. Well, not exactly. He receives new riches. Instead of Levi he receives a better name, Matthew, the gift of God. In place of money he receives a heavenly treasure. In place of the company of gamblers he receives the friendship of Christ and his disciples. In place of a tax ledger he receives divine inspiration to write a love story about Jesus.

And that is Caravaggio’s second painting, Matthew’s divine inspiration. He is much older now, barefoot and in solitude, leaning over a manuscript on a rough table with a quill in his hand and a knee resting on one of our refectory stools. The Holy Spirit, in the form of an angel, is leaning down from heaven above him, counting off words of life in the structure of a literary chiasm: five great discourses, eight beatitudes, a collection of thirteen parables, eight woes, and five conflicts with the Pharisees leading to the Passion, Death and Resurrection of Jesus. The Bible is the world’s perennial best seller, and Matthew’s Gospel is perhaps the most favorite book. By following Christ this humble tax-farmer became a farmer of people, a collector of sinners, an apostle to the whole world, an evangelist writing the good news on our hearts. But following Christ is not without suffering.

And that is Caravaggio’s third painting, the Martyrdom of St. Matthew. In this portrait the saint has been thrown to the floor by an altar, and has fallen on his back, struck down while offering the Eucharist. An altar boy recoils with a scream of terror as an almost naked executioner prepares to strike Matthew dead with the mighty swing of a spike studded iron mallet. The executioner’s near nakedness is a reminder that even the little he has will be takenaway, while Matthew, clothed in priestly garments, is about to receive even more. The scene is crowded with helpless onlookers who have tumbled out of the way while a few richly clothed persecutors give silent royal approval. 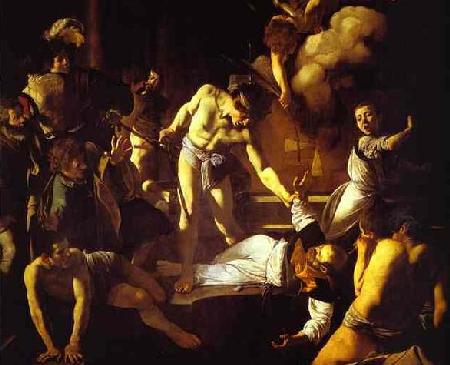 They do not see the angel reaching downward from heaven with a palm of victory stretched out towards St. Matthew’s uplifted hand. Tucked in the center of the painting is Caravaggio’s own self-portrait. He may be accusing himself of being a silent accomplice by just standing there, rather than following Christ more truly. For his own life left much to be desired. Or, he may be saying that this martyrdom, and every witness to Christ, transcends time, and proclaims to people of every age and place that Jesus is the Christ, the Son of the living God, so, follow him! “Who, me?”