Feast of St. Micahel and all the Angels

Feast of St. Micahel and all the Angels

Have you ever encountered an angel? A lay brother of New Melleray said he did. One Sunday evening during my studies at Creighton, I watched a popular television series called “Touched by an Angel” which is viewed by more than twenty million people each week. Television’s angels look and act like human beings, some of them are visible, others invisible, some know the future, others have extraordinary powers. In many respects this is the way sacred Scripture presents angels. The most endearing quality of biblical and Hollywood angels is their love, their friendship, their steadfast good will toward us.

St. Bernard must have been touched by an angel. In his first sermon for the feast of St. Michael and all angels, he quotes a popular saying, “Love me, love my dog.” Because angels love God, they love everything God loves. He writes, “Oh happy [angelic] spirits, we are the poor little dogs of that mighty Lord whom you love with such ardent affection.” From angels we receive comfort, protection, and inspiration to do good and avoid evil.

In St. Bernard’s commentary on Psalm 90 he writes, “Let us return gratitude and affection to such glorious guardians, let us give them love for love … and love them tenderly, since we are destined [to be] ‘joint heirs’ with them in sharing [God’s] glory.” 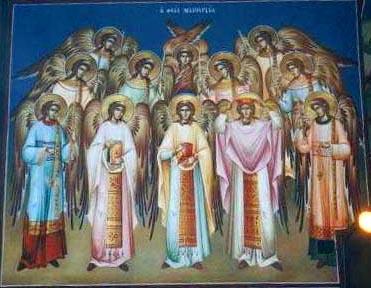 The bible is full of stories about angels. Jacob saw them ascending and descending a ladder reaching into heaven. The Angel Rafael assisted Tobias throughout his sojourn in a foreign land. The Angel Gabriel announced good news to the virgin Mary. The book of Revelation shows Archangel Michael victoriously casting down the dragon, Satan, who is our greatest enemy. Jesus identifies himself as Jacob’s ladder connecting heaven and earth. He alone is the way by which angels can ascend with our prayers into heaven, and descend with God’s gifts to us.

In the history of the Church there are many beautiful stories of people touched by the friendship of angels, like St. Cecilia whose guardian angel protected her consecrated virginity. Or the story of the three children at Fatima who saw visions of an angel of Peace a full year before they saw visions of Mary. This angel taught them a prayer which is my favorite expression of adoration and intercession: “O my God, I believe, I adore, I hope and I love you. I beg you to pardon all who do not believe, do not adore, do not hope, do not love you.” 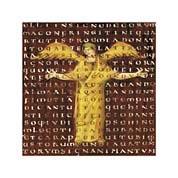 In the history of New Melleray, one of our members was touched by an angel, Br. Timothy Westmeyer, who died in 1976. During his final illness, we gathered around his bedside to pray for him. Br. Timothy interrupted us to testify that when he was seven years old he saw his guardian angel, and at about the age of fifty-two, when he suffered a paralyzing stroke, he heard his guardian angel speak words of comfort to him. Br. Timothy said, “I’m not trying to brag, it’s just a fact.” Really, it was more than a fact, it was a witness to his personal lifelong friendship with an angel, (but in his infirmary room, I have to say, he had one of the most ugly statues of an angel I have ever seen.)

Let us be grateful for the friendship of angels. Today, in this Eucharist, Christ is our ladder to heaven, the way by which we share with angels in the ascending heavenly liturgy of Christ’s own prayer to the Father, and the way by which we are made heirs with the angels in the descending gift to us of God’s own nature and our continuing sanctification in the Body and Blood of Christ. Angels often touch our lives. I think that they would like to be touched by our friendship.