Feast of the Baptism of the Lord at Mississippi Abbey, Jan. 11

Feast of the Baptism of Jesus

Life is a struggle between the tragedy Faustian bargains and the saving grace of baptismal commitments. The German poet and novelist, Johann Goethe, dramatizes the life of a medieval magician named Faust. In the story he sells his soul to the devil in exchange for power, youth and romance. Mephistopheles, the devil, promises Faust, “If you take your way through life with me, I’ll work things properly for you; I’ll be your servant and your slave.” Faust inquires, “And in return what do you ask of me?” The devil tells him, “…if beyond we meet again, you shall do the same for me.” Faust replies, “From this earth spring all my joys, … When I must take my leave of them, then come what may, it is of no concern. … I will it.” The devil responds, “These are splendid words!” Then he makes Faust successful and rejuvenates his aging body. Faust soon meets a young, beautiful girl name Gretchen. He seduces her and she bears a child, but in great distress Gretchen tries to hide her shame. 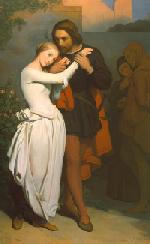 She panics and drowns the infant. In the drama’s final scene she and Faust are in a dungeon where she is waiting to be executed for her crime. Suddenly, Mephistopheles, rises up to claim them both. In terror, she cries out to heaven, “Save me, Father, for I am Thine! Angels! Gather about and keep me.” The devil declares, “She is condemned!” But a voice from above says, “Is saved!” Rebuffed, Mephistopheles turns to Faust and says, “You come with me!” and takes him away. Too late Faust realizes the folly of committing himself to future misery for the sake of present enjoyments. Isn’t the tragedy of Faustian bargains with evil the story of every temptation and fall since Paradise was lost? If we had no Savior the devil could claim us all.

John the Baptist did not know Faust. But he understood the tragedy of Faustian bargains. He preached by the Jordan river warning people, urging the crowds to a baptismal commitment of repentance for the forgiveness of sins. He cries out, “You brood of vipers, … prepare the way of the Lord, … flee from the wrath to come, … produce good fruit, … for even now the axe is at the root of the trees … the winnowing fork is in his hand to gather the wheat into his barn, but the chaff he will burn with unquenchable fire.” Future misery for present enjoyment is a bad bargain.

Now as John was preaching, Jesus himself stepped out of the crowd of vipers and walked into the swirling waters of the river asking John to baptize him. Why? Jesus did not need to be washed clean for he was sinless. He did not need to be sanctified for he was already holy. So why did Jesus go down into the aquatic womb when he did not need to be born again? Because the submersion of Jesus under the water was a prophetic sign of his death and burial, it was his commitment to die for us, to let the torrents of destruction assail him, and the waves of death overwhelm him. 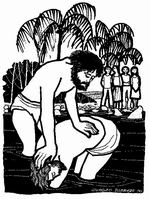 The waters of baptism are the grave of Jesus becoming the womb of Christians. St. Paul writes to the Romans, “We who were baptized into Christ were baptized into his death. We were buried with him through baptism,” (Rom. 6:3f). By descending into the waters at the beginning of his ministry Jesus commits himself to the suffering and death by which he will save us at the end of his ministry. Immediately after Jesus’ baptism, Satan begins tempting him with Faustian bargains to break his commitment. It was not easy for Jesus. On his final journey to Jerusalem, foreseeing his crucifixion and death, a great cry poured out of his heart, “I have a baptism to be baptized with, and how great is my anguish until it is accomplished,” (Lk 12:50). His baptismal commitment was not complete until he descended into the tomb.

Life is a constant battle between Faustian bargains and baptismal commitments. Three things happen at baptism, our sacramental Jordan river: first, we die with Jesus who forgives our sins; second, we rise with Jesus who sanctifies us with the gift of the Holy Spirit making us sharers in God’s own nature; and third, we promise with Jesus to renounce Satan, and all his pomps, and all his works. The life of Jesus shows that this commitment is costly, but resistance to present temptations for the promised gift of eternal happiness is a good bargain. As happened to Jesus, the devil fights against our commitment and daily puts us to the test. St. Paul writes to Timothy, “Fight the good fight for the faith; take hold of eternal life to which you were called when you made the good confession [at your baptism] in the presence of many witnesses,” (1Tim. 6:12). It is better for us to suffer under the axe of all the King Herod’s of this world, like John the Baptist, than to be dead roots of a tree that bears no fruit, and has to be cut down by the axe of eternal judgment, and thrown into the fire.

Goethe’s play dramatizes the fate of those who bargain away their souls. Less dramatically, he also writes about the fate of those who act on their commitment to God: “Until one is committed to a task or inspiration, there is hesitancy, the chance to draw back. One elementary truth, … is this: the moment you definitely commit yourself, then Providence moves in. All sorts of things happen to help you that would never otherwise have occurred, unless you are committed to act. A whole stream of events issues from the decision, which you could not have dreamed would come your way. Begin. Boldness has power in it. Begin now.” What a splendid commitment it is!