It seems to be a very natural and almost innate behavior to celebrate the birthday of those we know and love. No one consults Emily Post or a book of social etiquette to make this decision. We are naturally moved to celebrate and welcome someone new into our world, and to continue annually remembering that day. The world is now changed and different because of this new member of our human family. The physical, biological, and cultural world have provided the “material” from which this new creature has sprung, but whose reality recreates the potential that allowed for the event and process of birth.

In his encyclical Laudato Si', Pope Francis has written “Human beings, even if we postulate a process of evolution, also possess a uniqueness which cannot be fully explained by the evolution of other open systems. Each of us has his or her own personal identity and is capable of entering into dialogue with others and with God himself. Our capacity to reason, to develop arguments, to be inventive, to interpret reality and to create art, along with other not yet discovered capacities, are signs of a uniqueness which transcends the spheres of physics and biology. The sheer novelty involved in the emergence of a personal being within a material universe presupposes a direct action of God and a particular call to life and to relationship on the part of a “thou” who addresses himself to another “thou.” The birth and emergence of a person is a novelty and the beginning of a vocation that will unfold throughout the course of a life. We are our vocation.

Our celebration today of the birth of Mary joins the unfolding vocation of our own lives to hers. Our world has become changed and different because of her response to her vocation, already begun at the moment of her birth. She is our mother, not merely in some vaguely spiritual and ethereal way, but in a relationship rooted in biology and flesh. She is our family. We are her family. 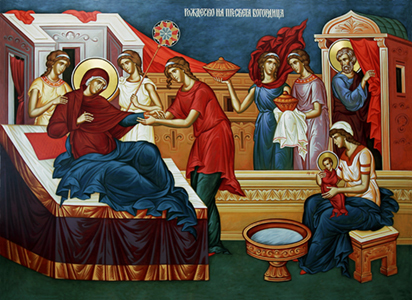 In celebrating her birthday, we honor and acknowledge the relationships made possible by her unique cooperation with God's plan and will, a cooperation which transformed the potentialities of biology of the of the cosmos. The apparent smallness (“too small to be among the tribes of Judah”) in terms of physical measurement was made the bearer of God's uniqueness. Cosmogenesis has become theogenesis.

In this morning's Gospel, Mary seems to be totally off-stage and in the background. The dialogue seems to be between two male agents settling her fate. But, in fact, she is at the heart of this struggle to admit the divine into human reality. The promise and “plan” of God is the work of his love and grace, taking flesh in the womb of Mary. The dilemma of Joseph was created by his love for Mary and his obedience to the Law. God's love asked for the assent of Joseph, for his devotion. Michael Casey recently described for us the four stages of devotion. The first is the experience, the embedded and personal realization of a call moving us outside of cultural limits. This is followed by an “illumination” which gives a sense of the deeper meaning and promise offered to us in the experience. We still stand at the brink of an amazing novelty which does not become real until we assent to it, take it “into our house”, and then live of life in practice which has been transformed from within. Mary is at the center of this dialogue, the unfolding of devotion, the one who has created the utterly novel convergence of human history with the Spirit.

It was June 5th, 1967, the beginning of Israel’s Six Day War with Egypt and Syria. My father and step-mother had just arrived in Jerusalem the day before on a pilgrimage to the Holy Land. They were on the last plane to land in Tel Aviv before the war began. For their own safety, all tourists were ordered to stay in their hotels. 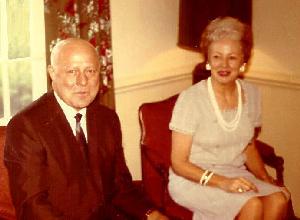 To pass the time strangers made friends with one another, sharing what news they could gather, and speculating on what the outcome of this war would be. A wealthy Arab Sheik talking with my father was smitten by my step-mother for she was a very beautiful woman. He made my father an offer to trade two camels for her. My dad raised his eyebrows and smiled at his wife. Not wanting to embarrass the man by telling him we don’t do such things, my father politely declined. But the Sheik was accustomed to bargaining. He doubled his offer to four camels. This tickled my dad and step-mother even more, and they laughed together. Dad graciously repeated his refusal. Again the Sheik increased his offer to eight camels and my father said, “No, definitely not.” Not discouraged, the man said he would trade twelve of his best camels for her. Now my father paused and began stroking his chin the way he would before making an important decision. Seeing this, my stepmother stood up and pulled him away, while dad repeated several times, “Just think, you’re worth twelve camels!”

In the Book of Proverbs the wise man teaches that the value of a virtuous woman is far above the price of precious jewels and cattle. How much more worthy is the Mother of God whose birthday we celebrate today!

Saint Aelred of Rievaulx expresses it this way: “If there is joy in heaven before the angels over one sinner who repents, who can tell what joyful and lovely praises rise up before God concerning holy Mary who never sinned? … If those who once were darkness and have now become light in the Lord and will shine like the sun in the kingdom of their Father, who is able to tell the eternal weight of glory of holy Mary, who came into the world like the dawn arising, beautiful as the moon, resplendent as the sun, and of whom was born the true Light? Since our Lord said, ‘Whoever serves me must follow me, and where I am there will my servant also be,’ where do we think his mother must be who served him with such eagerness and fidelity? … Of what praises is holy Mary not worthy, who bore the King of angels himself in her womb?”1

It should not surprise us that on the birthday of Mary, the gospel draws our attention to the birth of her Son, Jesus, with whom she was totally smitten. Isn’t this always the case with Mary? To look at Mary is to see the one who first embraced Jesus. 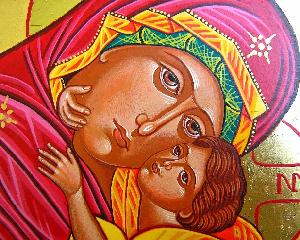 Follow Mary and we will find ourselves searching for Jesus and finding him in the Temple. Listen to Mary and we will do what Jesus tells us. In every way Mary brings us to Jesus, from his birth to his death on Calvary and his Ascension into heaven. She is the priceless woman who spent herself in union with Jesus who traded his own life for our eternal happiness. By his suffering and death he paid off the debt amassed by our sins. What are we worth? Of ourselves we are bankrupt. But like Mary, our worth comes from Jesus. For all the wealth in the world would not be enough to pay for even one drop of the blood that Jesus poured out for us.

Mary always brings us to Jesus.2 On this feast of Mary’s birth, let us ask to be more like her. When people come to you, do you bring them to Jesus like Mary? When people look at you, are their hearts smitten by Jesus?