Feast of the Chair of St. Peter

I used to think this was not a very relevant feast day even that it was about an idea rather than a person.  I have changed my mind drastically and now see this as one of the most relevant feast days in our calendar. It is about authority in the Church.

When Jesus announced that he would build his church on the person of Peter he began a process that goes on to this day. We call the Pope the successor of St. Peter. There is really not much room for something new in the Papacy but what is new is how each Pope emphasizes some particular aspect of the faith. I think our present Pope preaches continually about mercy and the needs of the poor and is making an effort to de-centralize the structures of the Church. No one man has all the answers, so, without changing the nature of authority in the Church. Pope Francis has inaugurated a Synodal approach to authority which will culminate in the Synod of Bishops next year. 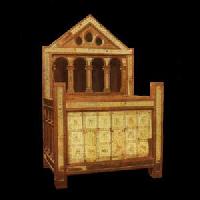 Yesterday I received a letter with survey questions that each Catholic in the Archdiocese will receive. This is a relatively new approach. It begins with the people in the pew, with the ordinary Catholic and their opinion matters. I say relatively new because we have the same process in chapter 3 of the Rule.

The church has been in existence since the time of Jesus and it has had its ups and downs. It has never been free of controversy or heresy and schisms but in the end Christ prevails in the person chosen to succeed St. Peter and hold his chair at the head of the table.