Feast of the Conversion of St. Paul at Mississippi Abbey

Archbishop Hanus once told me that during the silent period after he gave an eloquent homily a young child looked up to her father and asked out loud, “Daddy, what did he say?” She needed a concrete images, something like a stone in the middle of the road to capture her imagination and arouse her curiosity.

Saul was a young man around twenty-five years old when the Lord captured not only his imagination, but his whole person, in the middle of the road, the road to Damascus. As Paul expressed it in his letter to the Philippians, “Christ Jesus has made me his own” . Saul’s journey from Jerusalem to Damascus, a hundred and fifty miles, gave him plenty of time to think about the violence he was using against followers of Jesus-raging against them, casting them into prison, voting to put them to death. They were like stones in the middle of the road and he was determined to get rid of them all. But he had to kick against the wise counsel of his gentle teacher, Rabbi Gamaliel, who said, “Let them alone. If this undertaking is of men it will fail; if it is from God you will not be able to overthrow them” . Saul was about to find out that it was from God.

Like the proud, unsinkable Titanic heading full speed toward a giant iceberg, Saul went crashing headlong into a stone in the middle of the road. The rock was Christ. When Paul describes his experience to the Galatians he does not call it a conversion. He calls it an apocalypse , a revelation, a tearing away of the veil covering his mind and heart, to let him see the blinding light of the risen Lord. From then on he counted everything else as loss because of the surpassing worth of knowing Christ Jesus. 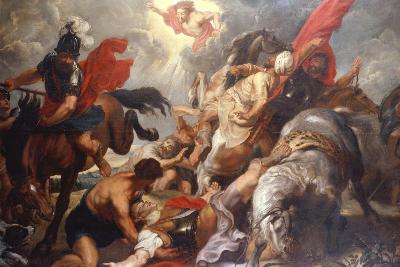 Writing to the Corinthians Paul compared God’s gift of revelation to the creation of light at the beginning of the world. “It is God who said, ‘Let light shine out of darkness,’ who has shone in our hearts to give the light of the knowledge of the glory of God in the face of Christ” .

Having captured Saul’s attention, while he was still lying stunned on the ground, Jesus said to him, “Why are you persecuting me? I am Jesus of Nazareth whom you are persecuting.” Another veil was torn away. Saul suddenly understood the mystery that was hidden for ages, that God’s plan is to unite everyone in Christ. All those little stones Saul despised are one with Jesus. Saul could not destroy Christ any more than he could flatten snowcapped Mount Hermon around which he had just passed along the road to Damascus. This apocalypse, this revelation, unveiled the splendor of the whole Mystical Body of Christ. It also filled Saul with terrible shame and deep anguish for persecuting Jesus in his members. He writes to the Corinthians, “I am the least of the apostles, unfit to be called an apostle, because I persecuted the Church of God” . And to Timothy he writes, “I am the foremost of sinners” .

For the next three days Saul could not see, eat or drink. It was as if he had died and was buried in his sinfulness. Then on the third day Ananias came to raise him up, to baptize him, to nourish him with the Eucharist, and to strengthen him with the gift of the Holy Spirit. Saul became Paul, a Greek name meaning “the little one,” for he considered himself the very least of all the saints . Paul spent the rest of his life proclaiming the mystery that was now unveiled: Christians are not isolated stones in the middle of the road. They are members of God’s household, built upon the foundation of the apostles and prophets, Christ Jesus himself being the cornerstone, in whom the whole structure is joined together and grows into a holy temple in the Lord, a dwelling place of God in the Spirit. The stone in the middle of the road is the whole Christ. 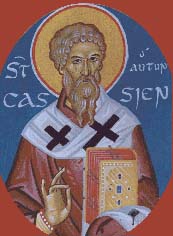 John Cassian draws an important lesson for us from Paul’s apocalyptic experience. He writes, “When Christ himself called and spoke to Paul even though he could have revealed to him the way of perfection then and there, he willed to send him to Ananias, an old man, to be instructed by his teaching” . Paul received an extraordinary revelation, but his greatest grace, reception into the mystery of Christ, came to him in the same sacramental way as it does to all of us. And it was through obedience to Ananias that he learned what he must do. The man that Saul would have cast into prison became the brother who revealed God’s will to him. Paul’s story teaches us that when we rely too much on ourselves to discern God’s will, we risk ending up doing our own will, or even opposing God. As with Paul, God desires us to follow the humble way of obedience when discerning his will in our lives .

As living stones in the heavenly temple of Christ’s body, let us celebrate this Eucharist with gratitude because God has made us an apocalyptic people, a people for whom his plan has been unveiled, revealed to us through the prophets, apostles, evangelists, and St. Paul whose two thousandth birthday we are celebrating this year.