This morning we are celebrating the Feast of the Church of St. John Lateran, and some of you might be asking yourself why, in our modern world which has championed the idea of “a church without walls,” we Catholics insist on perpetuating this feast in honor of a creeky old edifice of bricks and mortar that’s been standing for nearly two thousand years on a street in Rome.

By way of addressing this question, I would suggest that today’s feast might be thought of first of all as celebrating not a building — but a moment; a singularly great moment in history; a moment absolutely distinctive and unrepeatable; one of the great moments in the story of the human race; a historical moment that will never come again and which, being remembered, can have a salutary effect on the spirit. I am talking about the historic moment in which the emperor Constantine was converted to Christianity, and there ended, almost over night, the unspeakably horrible and bloody persecution of Christ’s church. I am talking about a moment in which a huge collective sigh of relief and cry of jubilation rose up from the hearts of the Christian faithful, exulting that the terror; the pitiless mowing down of Christ’s most beloved friends in the world, had finally ceased and a new Christian age was dawning. Presiding over the celebration of this turning point in history, the Emperor Constantine, in the year 324 AD, threw open the doors of his royal treasury and directed that a church be built within the Lateran Palace; a church he decreed, would be called simply: “The Savior’s Church”; which the faithful would come to know as “Aula Dei” God’s Palace; and which we celebrate today as the mother of all Christian churches.

Brothers and sisters, we are commemorating an edifice this morning, but only because it is the visible testimony of a moment in time; a moment so unique, so bright, and portending so much good for the future of us all, that one might say this moment did not just occur in time, but was for us actually a new revelation of the meaning of time. The founding of the church of the Lateran was a revelation of the deeper meaning of time itself and it is this illumination from God that we Catholics honor with today’s feast.

The Swiss theologian Hans Urs Von Balthasar has related how, over many centuries, our human understanding of time has evolved. In the ancient world people told each other myths about gods created in the image of men and women whose worship had the effect of turning man back upon himself. In the mythical world, time became something you passed through
on a journey—back to yourself; a journey in which time ceased to have any real meaning.

Likewise, belief in reincarnation envisioned human souls migrating between and dispensing with a sequence of bodies over time, the significance of any one these bodies vanishing in a stream of time that went round and round in circles continuously. In this belief system, once again, time arrives nowhere, fulfills nothing, and is ultimately meaningless.

In the modern world, where belief in God is profoundly questioned, there has arisen a notion of time based on the belief in progress. An implicit conviction that we are making continuous progress tends to be, for modern man, what gives time meaning; time, in this case, no longer conceived as going in circles, but in a straight line ever forward . . . and yet to what end nobody can say. We believe implicitly that we must be somehow making progress, but are unable to say what it is precisely we are progressing toward, the effect being, once again, to render time meaningless.

According to Von Balthasar, it is only with the appearance of the Jews and the writings of the Old Testament that there is revealed to human beings, the true and authentic meaning of time. Time, in the Old Testament, is neither circular turning back upon itself, nor linear moving in continuous progress toward a destination that remains unknown. In the Hebrew Scriptures, time is given a form. By God’s marvelous interventions into the concrete life the people of Israel, we see eternity impressing upon time a form; a beautiful and absolutely definitive form; God’s form; the form of divine love; ultimately revealed in the visible life, death, and resurrection of Jesus Christ.

Time, brothers and sisters, has a meaning, a meaning shown to us by God our Father in the history of the people of Israel and, finally, in the revelation of God’s humiliation in the person of Jesus Christ. God is love, and in that historic moment that marked the liberation of Christianity from persecution when thousands of the Christian faithful gathered in the church of the Lateran to celebrate their communion with one another in God’s love, they were shown in that moment the deepest meaning of time whose purpose is the realization of God’s dream for the world. Today we remember that church and return in our minds to a moment in the past which in a mysterious way awaits for us in the future; a moment from which the Christian people take a blessed memory, and to which all peoples of all nations and times will one day return.

Sooty smoke from the smoldering ashes of more than half the old city of Rome was still twisting into the air when emperor Nero destroyed something of far greater importance than business shops and peoples’ homes. The conflagration that burned for a week was followed by Nero’s decree of persecution. Tertullian summed it up in three terrifying words: “Christiani non sint!” Let there be no Christians! After the seventh day Nero rested while Christians were nailed to crosses, or covered with smelly hides to be hunted by hungry wild animals, or torched to light the pathways weaving through his gardens. The apostle Peter was crucified and Paul was beheaded in this loss of religious freedom.

A plot against Nero’s life by senators and officers was discovered at the eleventh hour. Among those implicated in the attempted assassination was the patriarch of the Laterani family who was put to death and whose property was confiscated. For the next three hundred years the Lateran Palace became the Imperial Palace until Emperor Constantine issued his decree of religious liberty. He writes, “… [May] this restoration of equal privileges to all, have a powerful effect in leading them into the path of truth. Let no one molest another in this matter, but let everyone be free to follow the direction of his own mind.” Constantine was not promoting religious indifference. For him Christianity was the truth, but he wanted to spread the truth by preaching and persuasion, not by force. 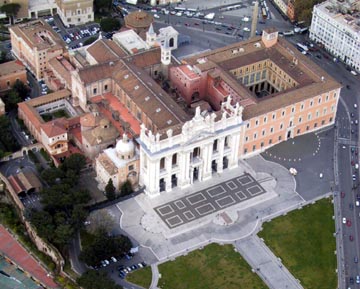 The need for religious freedom continues in our own day. At Vatican II the bishops repeated Constantine’s decree. They write, “The demand is increasingly made that people should act on their own judgment, enjoying and making use of a responsible freedom, not driven by coercion. It regards in the first place, the free exercise of religion in society” .

Until the decree of Constantine, Christian worship had to be celebrated in private homes or inconspicuous chapels, and sometimes in catacombs. All that began to change when eighteen bishops and the Pope met with the Emperor in the imperial palace of the Lateran on October 2, 313 AD. Constantine’s wife, Empress Fausta, gave the Lateran Palace to the Church. It became the Pope’s residence for the next thousand years, and the construction of the Lateran basilica was the first of all the Churches that are now spread around the world. It continues today to be the Pope’s own cathedral, the mother of all churches, including St. Peter’s. We are able to worship here today, in this beautiful church of New Melleray, because of the religious freedom that was celebrated with the consecration of the Lateran basilica on Nov. 9, 324 AD.

What is it that makes this a sacred place, that defines a church as holy? Every culture has certain sites revered as holy because of the religious experience of the people. 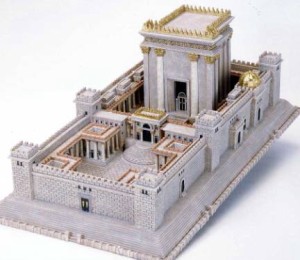 The Aztecs built a Mayan city called the “place of the gods,” home to the Pyramids, places of prayer and communion with the gods. The Hindus regard the Ganges River as holy. The Ugandans reverence as holy the place where twenty-two Catholics and forty-four Protestants were martyred for their faith in 1886. One of Islam’s most holy places is the limestone rock under the golden dome in Jerusalem, where they believe Muhammad ascended to heaven. For the people of Israel it was the Temple that was holy.

Jesus, however, said the Temple would be destroyed and he would rebuild it in three days, not the Temple of stone, but the Temple of his own body. In Jesus, the holy place became a holy Person, the presence of God, with whom we can commune and experience God’s love. Churches are holy because Jesus is there, and people are holy when they become temples of the Spirit of God.

Today’s feast reminds us of our religious freedom to find the presence of God in our Churches and in one another.