Feast of the Dedication of the Basilica of St. John Lateran 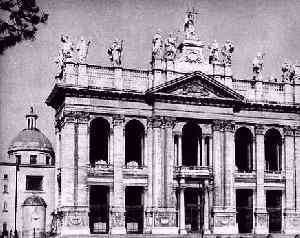 Unless one has been to Rome or has read something about the Eternal City, the Basilica of St. John Lateran is hardly known or heard of. We are more familiar with the Basilica of St. Peter at the Vatican where the Pope is regularly seen with his Sunday Angelus messages or Papal Masses. As we celebrate today’s feast of the Dedication of the Basilica of St. John Lateran, the question may linger in our minds: How about St. Peter’s Basilica, is its dedication of universal recognition? Why the Lateran, and not St. Peter’s? With its beauty and as the present residence and church of the Holy Father at the Vatican, our hearts fall more for St. Peter’s.

In Rome, the Lateran Basilica is the oldest of the four major basilicas, along with St. Peter’s, St. Paul’s outside the walls and that of St. Mary Major’s. In the history and life of the Catholic Church, this basilica occupies great importance. The property as palace originally belonged to the Laterani family. It became an imperial property under Emperor Constantine who donated it to the pope. In 324 AD, he also built the basilica. The palace has served as the official residence of the popes for more than ten centuries (from the 4th to the 14th century) until this was permanently moved into the Vatican Hill around the sixteenth century where St. Peter’s Basilica stands.

Chapels, churches or basilicas have a mysterious character behind them. We call them ‘the house of God,‘ for in it God opts to dwell in order to stay closer among His people. In the Old Testament, prior to the building of the Temple of Jerusalem the Lord expressed intimacy with his people by dwelling in the Tent or resting in the tabernacle. Later on, as Israel became more settled, God informed King David of his plan to build a stable house made of strong materials like wood and stones, . In the Gospel today, , we hear that the temple at the time of Jesus took forty-six years to build it. And here comes Jesus who cleanses the temple as it made the Jews reactive. He thus challenged them to destroy the temple, and in three days he would raise it up, . We have then the Temple, the house of God where the people of Yahweh assembled, and Jesus talks of a new house that he would raise up.

It was only after the events of Jesus’ suffering and death and by his resurrection that his disciples understood that he meant the temple of his Body, . Later on, St. Paul speaks of the Christian believer as the new temple of God where the Holy Spirit dwells, . We see then the reference from the temple made of stones to the sacred Temple of the Holy Spirit. It needed the sacrificial offering of Jesus on the Cross to make that transition and help us better appreciate the saving mystery of the Church as the Body of Christ. The church is the God’s house made of wood or stones. However, beyond these structural materials lies a solid foundation in Jesus Christ, . The Spirit of Christ gives the church its life and spiritual character. The Church then is not just the building made of stones, but the persons made of flesh and bones where the Spirit abides and is welcomed. St. Paul reminds us that this temple of God, the believer in Christ, the people of God, is holy, and must be respected.

The Basilica of St. John Lateran is made of stones and built in architectural beauty of its time. But it is meaningful in terms of its being the official church of the Holy Father. Since the Pope is the successor of Peter, the chosen head of the Church of Christ, this basilica has become the sign of devotion to the leadership role of Peter and of unity with him. When the pope celebrates the Mass at this major church, he presides over all the churches or assemblies who are in communion with him in charity. There are two important celebrations that the Holy Father presides yearly at the Lateran basilica. One is at the Solemn Feast of the Body and Blood of Christ (Corpus Christi). The other is at the celebration of the Lord’s Supper on Holy Thursday. On these two occasions, the significance of oneness in charity in the Lord Jesus through the liturgical leadership of the Pope is clearly manifested. The unity in the Spirit of Christ is vividly lived in the Eucharist.

What makes the Lateran basilica meaningful for us goes beyond its image as a stone edifice. It is rather the liturgical celebration of its dedication, together with its theological sense, that makes it very much alive. We realize that behind the stones of every church, such as this church of the abbey, there is the Spirit of God which gives its life. The Sacred Scriptures, or the Bible, has been aptly described as ‘the book that breathes‘ because of its inspired character. In the light of its being the dwelling place of God through the Holy Spirit, we can call the Church as the place where the Heart of God vividly beats. It is here where God’s word resounds. It is here that the Body and Blood of Christ is received and shared. It is here where the demand of charity is echoed and lived. It is here where we as the very Temple of the Holy Spirit come together in love and are infused with new life in God. It is also from here that love emanates and finds concrete expression wherever we live our life of faith. 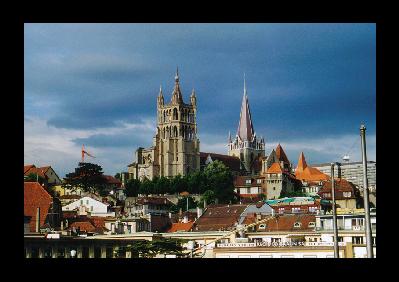 Let me toss a note of concern. Europe and other Christian homelands are the sites of beautiful chapels, churches and basilicas with their Gothic, baroque, renaissance or modern architectural styles. Nowadays, most of these sites have become mere historical landmarks or turned into museums as tourists visit them for their esthetic and religious values. The sad thing is that they seem not to be seen and used as God’s dwelling place anymore. Has the Spirit of God fled from them? Or do people no longer welcome God in their hearts with the same enthusiasm as before; hence, His abode is not welcome as well? We hope not to hear it said again by the Lord, “Destroy this temple and in three days I will raise it up.” Could there be other gods dwelling in the temples of the Holy Spirit such that God becomes an unwelcome stranger? Could the empty churches not simply indicate the closed hearts of peoples—through utter disrespect for life and the perception of God as intrusion into man’s privacy and personal rights? Jesus desires to cleanse the temple once again in order that God may find a rightful abode.

Jesus calls His Father’s house as a house of prayer. We still relate with God beginning with our openness to prayer. We pray to God from the depths of our hearts. We might stay behind the closed doors of our room. The monk enters into his cell. When we pray, we eagerly look for a space for God, not just in our hearts but even in the spaces we move around. Where God dwells, sacred spaces are created. We respect the churches and basilicas. We respect our person and those of others for in them all, God dwells.

On this feast, let our prayer be: “Lord, teach us to pray that we may welcome you into our hearts, that we may see you as present and alive in others, especially those which modern society considers useless. May we always appreciate the gift of churches or your dwelling places to reassure us of being by our side, especially when times get rough and the going becomes ever difficult. Align our minds and hearts according to the teachings of your chosen apostle Peter and his successor. With the intercessions of Mary your Mother and our Mother, who has been your home prior to your birth in the human flesh, we ask this of the Father through you in the Spirit. Amen.”