Feast of the Nativity of the Blessed Virgin Mary

It was a dark and stormy night when Mary was born, with the wind howling in the trees like demons on the loose. Well, maybe it wasn't such a night, but I always wanted to start a homily that way. You know, something reminiscent of Edgar Allan Poe or Alfred Hitchcock, those masters of suspense stories.

But change one word: “It was a dark and stormy WORLD when Mary was born.” It certainly was, and still is. Although Mary's life began with shouts of joy from her parents and neighbors, she was born into a fallen world ruled by the Prince of Darkness who spread sin, suffering and death. But at the birth of Mary, there was daybreak, the dawn of a new age.

The story of how darkness spread over our world is described in the first chapters of the Book of Genesis. So also, the very first comic strip of Charlie Brown that appeared in October, 1950, tells the story of how that darkness continues in our own times. A boy and girl are sitting on the steps of a sidewalk as Charlie Brown approaches. The boy says, “Well! Here comes Ol' Charlie Brown!” As Charlie passes by the boy turns to the girl and repeats, “Good Ol” Charlie Brown, yes sir!” After he is gone the boy scowls, saying, “How I hate him!” That's the way St. Paul describes our fallen world to Titus when he writes, “Our days were passed in malice and envy; we were odious ourselves and we hated one another” (Titus 3:4-5).

In his second comic strip, Charles Schulz makes sure we understand what kind of world we live in. Patty is walking down the street sweetly reciting this verse, “Little girls are made of sugar and spice and everything nice…” In the next panel she comes upon a boy and slaps him across the face. Continuing on her way she says, “That's what little girls are made of.” We must add boys, too. For here the children represent the whole human race. But with the birth of Mary dawn begins to drive back the darkness. 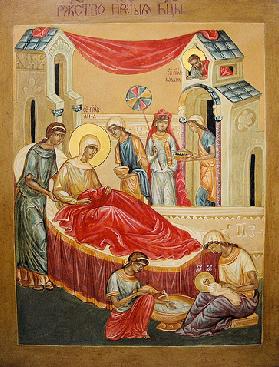 In another comic strip Lucy is reading the nursery rhyme: “Humpty Dumpty sat on a wall, Humpty Dumpty had a great fall. All the King's horses and all the King's men, Couldn't put Humpty Dumpty back together again.” Lucy concludes, “That's the way it goes!” Yes, it is. In the dark and stormy world into which Mary was born, where demons on the loose howl for someone to devour, we could not put this world back together again. But with the birth of Mary the promise God made to Adam and Eve began to be fulfilled. Mary's Son will crush the head of the Ancient Serpent.

Sin never took hold of Mary. Darkness never entered her space. So, what was her birth really like? Imagine total darkness in which a small diamond of light begins to shine. That is Mary's birth. She is the “daybreak of salvation.”1 Mary's birth was like a ray of sunlight suddenly bursting over the horizon. By a gift of God she was full of grace from the first moment of her conception. At Mary's birth she was already Queen of the Universe and destined to become the Mother of Jesus, the Son of God, the Light of the world.

When Mary was born the stormy darkness of our world was pierced with the blazing light of grace. During the Civil War, in the dark winter of 1864, the Confederate army of Robert E. Lee faced the Union divisions of General Ulysses S. Grant. The war was not yet three and a half years old. Late one evening one of Confederate generals, George Pickett, received word that his wife had given birth to a baby boy. Up and down the front line, Southerners began building bonfires in celebration of the happy event. General Grant sent out a patrol to see what was going on. The scouts returned with the message that a son was born to Major General Pickett. Grant and Pickett had been contemporaries at West Point and knew one another well, so to honor the occasion Grant ordered that bonfires should be lit on the Union side of the line as well. For miles on both sides, bonfires pierced the darkness, celebrating the birth of a child. But once the fires burned down the darkness of night and war resumed.

At Mary's birth there was a difference. Her blazing light of grace never went out. Instead, it increased even though she was born into the same stormy, oppressive, painful world of sin, suffering and death we all experience. In fact, her suffering was worse than ours. Although sin never darkened her soul, the presence of evil caused her greater suffering because of her innocence and goodness. Hans Christian Anderson writes that one night there was a terrible storm of thunder and lightning, the rain poured down in torrents. In the middle of the storm someone drenched by the rain knocked at a palace gate. She said that she was a princess. “We shall see,” thought the old Queen, who laid a pea on the bed and then piled twenty mattresses on top of it, with twenty feather beds on top of the mattresses. In the morning they asked the princess how she slept. “Oh, terribly bad,” she said. “I seemed to be lying upon some hard thing, and my whole body is black and blue.”

So also, Mary suffered terribly from the attacks of the Serpent upon her heart and upon her Son, and upon the world of which she was Queen. Her many sorrows were bitter martyrdoms, all the more painful because of her innocence and goodness. Today we celebrate the birth of Mary when the darkness of our stormy world was pierced with light. On other birthdays we bring gifts for the celebration. But on this birthday Mary is the gift, the dawn of a new age that will never end, in which darkness is overcome, where there will be no more sin, or suffering, or death, where every tear will be wiped away. With Mary's birth we see the daybreak, and we know for certain that this dark stormy world is passing away.