Feast of the Transfiguration 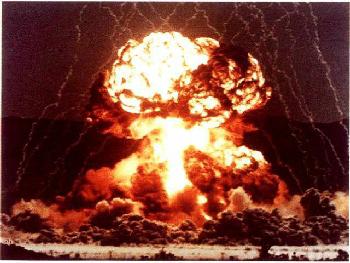 The disciples of Jesus did not know it, but they were about to witness something that had never happened before. Suddenly a blinding light flashed around them. In great confusion they turned to see where it came from. In the next moment a force rushed over them, knocking them down. This was not the little whisper of a gentle breeze like that heard by the prophet Elijah when he encountered the Lord. It was an even greater force than the frightening storm of thunder and lightning that shook Moses and the Israelites at the foot of Mount Sinai. The disciples of Jesus later compared it to the fury of an enormous hurricane. One moment everything was calm and peaceful. Then a flash of light brighter than the sun and a blast of wind stronger than any hurricane swept over them and just as quickly passed away. This was not the Transfiguration, but what Dorothy Day called the “anti-transfiguration.” It was the bombing of Hiroshima on August 6th, 1945, the feast of the Transfiguration. The disciples of Jesus, Fr. Pedro Arrupe and his fellow Jesuits, staggered to their feet. To see what happened they went outside and climbed the hill protecting their residence on the outskirts of the city. From the top of that little mountain they saw Hiroshima transformed into one enormous lake of fire. There were thousands upon thousands of people whose bodies were half melted by the intense heat trying to flee the inferno. Half of a 140,000 people died right away. They were spared greater agony. The other half died slowly over the next few weeks and months. Ever since that devastating day, the world has been living under the threat of what author Tom Clancy calls, “The Sum of All Fears,” a nuclear holocaust.

Fr. Arrupe writes, “It is at such moments one feels in need of supernatural assistance.” In the time of Jesus, people did not fear nuclear attacks. What they dreaded was crucifixion. Jesus knew he would die by crucifixion. It filled his heart with such agony that he climbed Mount Tabor to prepare himself by prayer. And he was transfigured with divinity, the sum of all hopes. Jesus willingly died so that we could share his divinity. 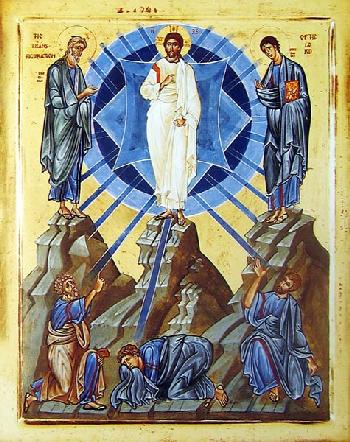 St. Peter was an eyewitness of the honor and glory that Jesus received from the Father on that holy mountain. He writes, “His divine power has given us … his precious and very great promises … so that you may escape from the corruption that is in the world … and become partakers in the divine nature” (2 Pet 1:3f). In the second reading Peter continues, “You do well to be attentive to this as to a lamp shining in a dark place, until the day dawns and the morning star rises in your hearts” (2 Pet 1:19).

Whether we ever come face to face with the Sum of All Fears, a nuclear attack, or with a more limited, personal agony, today’s mystery of the Transfiguration offers us the greatest of all hopes, divinization. We are called to enjoy eternity not only in a human way, but with participation in God’s own nature, God’s own level of existence. In the very first sentence of the Catholic Catechism we read that, “God, infinitely perfect and blessed in himself, in a plan of sheer goodness freely created mankind to make us share in his own blessed life” (#1). And in Article 1 on Revelation we read in the Catechism that, “It pleased God, in his goodness and wisdom, to make known the mystery of his will … that we should … become sharers in the divine nature.”

This is not just a metaphor for the greatest possible human happiness. It is a call to divine happiness. Like Jesus who is a divine Person with two natures-his divinity possessed from all eternity, and his humanity at the Incarnation-all the baptized also have two natures: a human nature from conception in our mother’s wombs, and a share in the divine nature from baptism making us adopted children of God. 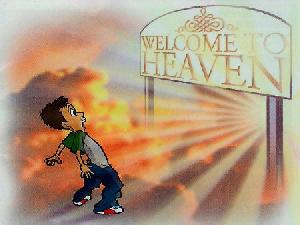 Let us think clearly about this grace: it is not pantheism, because there are three essential differences between us and God. First, we do not become divine Persons. We remain human persons but with two natures. Second, we do not become infinite. We remain finite but with an unlimited capacity to grow in things divine. Third, we do not possess this share in the divine nature of ourselves, but in dependence on God’s gift to us.

How awesome is this gift, this sum of all hopes, divinization! St. Peter urges us to remember it often, like a lamp that chases away the darkness of all that we fear. Think of it! We are called to share divinity, to do what only God can do. First of all, to see at God’s level of seeing, and that means the ability to see God, for not even the angels can see God by means of their own angelic nature. They also need to share in divinity to see God. Second, it means the ability to be present at any moment of time, past or future, like God is. Third, it means the ability to retain every joy forever, untarnished by time ticking away. Only divinity can do that. God never loses any joys, they never pass away. There is no nostalgia in heaven, no looking back at joys gone by, for they continue forever. And, might we also share God’s ability to create from nothing? What will you create?

This is the meaning of Christ’s transfiguration in glory, the sum of all our hopes. St. Paul writes, “This slight momentary affliction is preparing us for an eternal weight of glory beyond all measure” (2 Cor 4:17). All day and night Fr. Arrupe and his fellow Jesuits ministered to the people of Hiroshima by tearing up their bed linens and even their clean underclothes to dress the wounds of the afflicted. Next morning, Fr. Arrupe celebrated the Eucharist. He writes, “In turning around to say ‘Dominus Vobiscum,’ I saw before my eyes many who were wounded, suffering terribly. … I had to be careful not to touch with my feet the children who lay so close to me. I do not think I have ever offered Mass with such devotion!” We cannot live well without divine assistance.

Brothers and sisters, the Mass we celebrate here this morning is one Mass with that celebrated by Fr. Arrupe at Hiroshima. It is one sacrifice with that offered by Jesus at the Last Supper and on Golgatha. We are never very far from the sum of all our fears. Let us never be very far from the sum of all that gives us hope, God’s invitation to share in the divine nature. It is promised to us by the divine kiss we receive in communion, a kiss that will one day open our eyes and hearts to God’s world when we also will be transfigured.