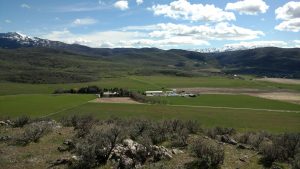 When Pope Francis visited the United States in September of 2015 he was invited to address a joint meeting of Congress.  He spoke of four Americans who made a difference for the good of our society.  They were President Lincoln, Dr. Martin Luther King, Dorothy Day and Thomas Merton. It was said that even during the talk and certainly after the internet was abuzz with people trying to find out who Thomas Merton was.  I think all of us here know who he was but just in case you don’t, Thomas Merton was a monk of Gethsemani Abbey where the monks who founded Holy Trinity Abbey came from.  In monastery lingo, Holy Trinity Abbey was a daughter house of Gethsemani.  Merton entered Gethsemani in 1941.  The monks from his monastery who founded Holy Trinity left there six years later in 1947. 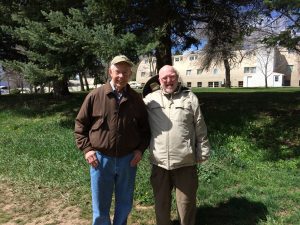 The Pope tells us Merton was important because he reached out to monks of other religions, notably the Buddhist and the Hindu Sanyasi.  Merton was ahead of his times because previously there were iron clad boundaries around various religious beliefs.  To put it crudely, we had the full truth and the others didn’t.  This was not just on the Catholic side but all the denominations believed the same thing!

In 1947 when the 42 founding monks of Gethsemani left for Salt Lake City they occupied a full train car, a Pullman car. From what I hear they pulled off to a side rail in St. Louis and either spent a few hours or perhaps the night there.  This made the St. Louis Post Dispatch newspaper and a young student from St. Louis University read the story and a short time later joined the new community who were living in barracks used by German war prisoners until their monastery could be built.  His name was Nicholas Pincer, known to many simply as Brother Nicholas.  As I mentioned these were the days when almost everyone thought their religion was the only religion with the truth.  There was no such thing as the ecumenical dialog going on.  But a beautiful thing happened here between the monks and the local Mormon community.  What happened was not the result of scholars from each group coming together to discuss points of dogma or history or anything like that.  What happened came about by ordinary people striking up a friendship. 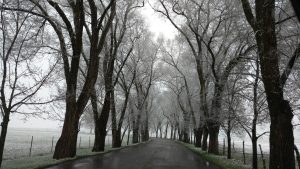 The monks were farmers and occasionally a local farmer would come by to buy hay or to just talk about the equipment or just to pass the time.  Monks and Mormons came to realize that no matter how much they differed in beliefs they were still good human beings and they could relate on that basic level of goodness.  Good friends can differ on important things and still remain good friends.  That is the beauty of a human being.  This is what happened in the Ogden Valley.  No one joined the other’s religion, no one felt the need to do so or the pressure to do so, that was not what it was all about.  It was about being good neighbors, good friends, and good relationships and believe me that is one of the great blessings of life and the monks and the Mormons had it and still have it. 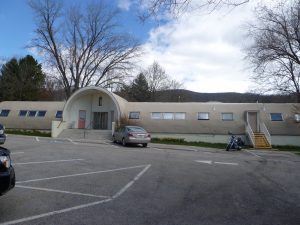 The monks were gradually accepted and as time went on appreciated by their neighbors.  They never went out to preach or give talks or try to make converts and I think that was appreciated, too.  They were just there doing what monks to, pray and work.  The motto is Ora et Labora, meaning prayer and work.

As time went on and vocations to the life at Holy Trinity stopped coming the monks grew older and older and with no one to survive, they were forced to close.  By this time there were two or three in St. Joseph’s Care Center in Salt Lake City.  If I recall accurately there were eight monks in the monastery when it closed in 2017.  The normal procedure when this happens the monks go to Gethsemani since that was their mother house.  But a strange thing happened. The ones slated to go to Gethsemani decided to stay together and chose to go to St. Joseph’s Villa instead.  It was a rather remarkable bond they had with each other that could have been lost if they had to integrate into the Gethsemani community.  Another factor in this decision was the fact that several of these monks had a circle of friends in the area.  After all, if you live for 55 to 65 years and are as kind as these men are, you are bound to have a large circle of friends whom you do not want to leave behind.  Fr. Malachy started to stay here when he decided not to go back to Gethsemani.  He was born about 15 miles from that Abbey and entered there as a young man and was the only founder left.  Yet he did not want to leave the men who were already at the Villa so he stayed and so did the others.  There are three monks left—Patrick, Casimir and David Altman, a Jewish convert.

The monastery closed but the spirit of the monks is still there.  The cemetery is the final resting place for everyone who entered the community and persevered since 1947.  It was very sad to have to close the monastery, sad for the monks and sad for the Ogden Valley, but what they did here through the years will not soon to forgotten, and somehow the holiness of the place or maybe better the specialness of it will live on for many generations.  Perhaps there is a young person here who will meet a monk today and 70 or 80 years hence will be able to brag, “I am the only one left who actually met a monk.”