The story we just heard from Jesus is designed to arouse our emotions. Emotions are evaluations of an experience. With emotions we learn “to intuit the good and suspect the evil.”1 Lectio Divina is a very important part of our monastic day because such reading schools our affections in accord with a follower of Jesus Christ. Jesus begins by arousing a sentiment. Sentiments help us identify favorites; they make principles, like compassion, meaningful, but don’t cause us to act. So, when Jesus asks the scholar what he understands the law to say about inheriting eternal life, the scholar cites the two Great Commandments. As a “neat idea” the scholar finds them touching, inspiring. But then he gets practical and asks, “Who is my neighbor?”, and Jesus takes a more serious tact. He and the evangelist are addressing our emotions, our dispositions; i.e. our readiness to act.

In posing the Samaritan as a neighbor-worthy-of-love, Jesus is inviting the Scholar to a change of disposition, to re-consider his stereotyping and inclination to scapegoat an entire people. The Scholar was a student of religious law and this parable is directed at religiously serious people who are disposed to narrow-mindedness. Jesus wants him to keep the new Law in his heart. It is from there that the disposition or readiness-to-act springs. 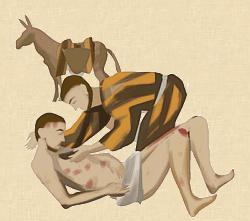 The Levite and the priest pass by the wounded man. The man represents humanity tired of the ways of the world and wounded by sin. He wonders, “Is there no other way?” The Levite and priest represent the religious establishment mired in “Us vs. them” thinking. In stereotyping the Samaritans, they deprive them of personhood and reduce them to members of a species.

Jesus is encouraging a disposition of compassion in us. Compassion frees us from self and makes us contributors. Everyone is created to be a contributor. Original sin—self-centeredness—militates  against this. With the oil and wine of the sacraments and the care of the Church, the Inn, compassion can prevail.

Rose Hawthorne was an example of this compassion, a disposition that grew out of her own experience of pain and powerlessness. She was the daughter of the great 19th century American writer Nathaniel Hawthorne, author of The Scarlett Letter and The House of the Seven Gables. Born in 1851, she grew up socializing with the elite of her time. When she was 13 her father died. Her mother died a few years later. At 20 she married and their first child died at the age of five. The marriage fell on hard times. She became quite depressed and began searching for a better way to view life. She discovered Catholicism and joined in spite of family opposition.

The difficulties of her life bore fruit when she read of a young seamstress who had terminal cancer. Rose prayed that she might find a way to help such people. She was shown that way and opened a house for terminal cancer patients. 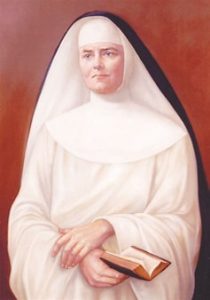 After her husband died she entered the Dominicans. She later founded a branch of Dominicans devoted to care of terminal cancer patients. They are known today as Hawthorne Dominicans. Rose died in 1926 and a story about her was published in a New York newspaper read by a young intellectual named Dorothy Day. It inspired her; she felt admiration expressed in emulation. it opened her to the Spirit.

Jesus knows that compassion grows out of our own experiences of suffering, of rejection, of marginalization, and… bad luck. They can cause alienation from God, from our created purpose of contribution, but by the power of Christ they can renew in us the likeness of God. That power is experienced in emotions that guide us to a change in values, in our sense of what matters most.  That’s what happened to the Samaritan; it happened to Rose Hawthorne; and it happened to Dorothy Day.  “Go and do likewise.”