A woman in the very act of adultery heard the noise of intruders burst into her bed chamber.  She cringed in fear as the witnesses of her sin pounced upon her. She was caught and now she would be punished. Ignoring the man, they laid hands on the woman, pushing and pulling her along, tipping and falling, going unwillingly to the Temple where Jesus was teaching.

Christ promised, “Seek and you will find.” The adulteress sought pleasure, and found it; but she also found darkness and despair. Leo Tolstoy writes about his own sinfulness: “My straying had resulted not so much from wrong thinking as from bad living. I realized that the truth had been hidden from me not so much because my thoughts were in error as because my life itself had been squandered in the satisfaction of lust… I realized that in asking, ‘What is my life?’ and then answering, ‘Evil,’ I was entirely correct. [But I took] an answer that applied to myself and applied it to life in general; I had asked myself what my life was and received the reply: evil. And so it was. [But] that assertion applies to my life and not to life in general. I understood that people cling to darkness and shun the light because their deeds are evil.”1 We may fall by our own hand, but we cannot be saved by our own hands. 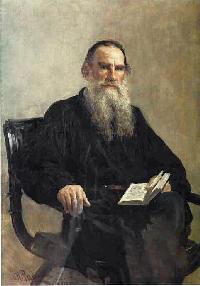 The woman caught in adultery was dragged before Christ. They made her stand there in naked shame, with tears streaming down her face, and the noise of the accusers filling her ears. Dust and dirt clung to the bare parts of her body where she had stumbled. The accusations of the witnesses shook her entire being with the alarming and devastating truth, not of her innocence but of her guilt. She had chosen evil, and evil demands justice, a punishment fitting the sin.2

The crowd stared at the woman and Jesus, for both were sinners, she by adultery and he, they thought, by breaking the Sabbath and blasphemy. They would like to be rid of him even more than her, manhandling the woman to trap the Master. Living in darkness they pointed at the sins of others, ignoring their own. That was about to change. For the bright penetrating light of Christ will show that when one finger is pointed at others, three fingers point backward to oneself.

Jesus saw the pathetic woman standing there before him, cringing in her exposed sinfulness. He looked into her soul and saw the inner anguish and heard the cries wringing her heart and wrenching her body. Christ also looked at her accusers and saw their souls as well, the unacknowledged sinfulness of their own lives. Instead of being swept up in wonder at the amazing beauty and value of every living being, even the sinner, they were blinded by their own darkness until Jesus said, “Let the one who is without sin cast the first stone.” 2 A steady Light penetrated their darkness and exposed 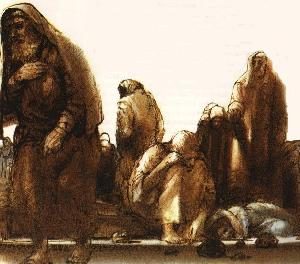 their guilty consciences. Jesus would have forgiven them all, but they fled back into darkness going their own way, beginning with the eldest and ending with the youngest. St. Augustine writes, “Only two were left, misery and mercy.” When Jesus bent down before everyone, what did he write on the ground the first time? Perhaps he wrote, “All have sinned.” And the second time? Perhaps, “I will forgive.”  For sure, this is the message of Jesus written in the Gospels.

All have fallen. We all need love and forgiveness.  It was offered to all, but only the woman remained to receive it. Jesus rose up and stood before her, as he did again for us at the Resurrection. Did he put his finger under her chin, gently raising her head until he could look into her eyes? Did he wipe away her tears as he asked, “Has no one condemened you?”  She said, “No one, Lord.” Did he take her hand in his own as he replied, “Neither do I condemn you. Go, and do not sin again”? Physical miracles are good, but the greatest of all miracles takes place within the heart.2 St. Bernard writes, “The cost of forgiving us was more difficult for God than creating the world. He made us by a single word. In remaking us he had to suffer crucifixion.” 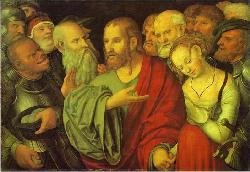 A great German Renaissance artist of the sixteenth century, Lucas Cranach the Younger, painted the scene of the woman caught in adultery. She is standing next to Jesus with his left hand entwined with her right hand, the hand of mercy joined to the hand of misery. We live in the land of beginning again, in the Church, where our mistakes, our sins, can be forgiven, where Christ stretches out his hands to us and make us his own.