There are all kinds of ways to interpret the three temptations of Jesus in the desert. Everything about them including the place has a plain meaning and a spiritual and symbolic meaning. It seems to me that the bottom line for all three temptations is to have Jesus decide not to become human but to compromise his incarnation by using his divine power. On the other hand Adam desired not to be human but to be as Bonhoeffer says “Sicut Deus”, as God is. He wanted to stop being a creature and become like God – in fact, independent of God and a fully autonomous person who did not need God, a desire all of us have hidden in our psyche. Jesus reversed this and shows us how to be a creature under God, how to be a full human being.

When Adam and Eve were driven out of paradise they left with a curse on their heads. Paul tells us Jesus became a curse for us. In other words he bore our curse. One author says Jesus chose the way of the cross because it was our way after the Fall. To accept the pain and struggle involved in being human is a cross. We, like Adam try to reverse that and be free of the cross, be free of the curse. 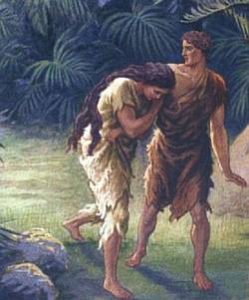 The great mystery that Jesus reveals is that by embracing our humanity, by accepting our incompleteness, our struggles he redeeming them. Jesus did just that all the way to the greatest cross of all death. By going through death he makes death a door to eternity. The sting of death is gone.

Lent is a time for us to go into the desert of our life, to reflect on the suffering servant in Isaiah. Reflect on the man acquainted with grief, the man who bore our infirmities and carried our diseases. A man rejected by others. If we meditate on this man and read all the passages in Isaiah of the suffering servant you will see the same man described in the 12 steps of humility in the Rule of St. Benedict. A worm and no man. A beast in God’s sight, a man who has not come to do his own will, a poor and worthless workman and all the rest. These are ways to put on the mind of Christ who took the form of a slave and did not cling to God’s divinity as Adam tried to do.

St. Benedict reminds us that monastic life has a Lenten quality about it all the time. When the monks from Molesme left for Citeaux it is said they did so to follow the rule more closely, more authentically. I used to think that meant all the little prescriptions and injunctions but maybe it meant an overall attitude not just a particular rule. Perhaps something like a Lenten quality they found missing at Molesme. In describing the place they chose to live they barrowed words from the book of Deuteronomy where Moses speaks of God sustaining his people in a desert land, a howling wilderness waste.  Citeaux is said to have been a “place of wild animals since it was a wilderness of dense woods and thorny thickets, impenetrable to humans.”  A wilderness waste is where God sustained the Israelites, it is a place where our founders wanted to live and it is a place which for us in our developed world will have to be a desert of the heart, an inner desert where we will be tempted with no one but God to help us. We deliberately disarm ourselves and carry the cross of self-everyday as Jesus teaches. The life of a monk has a Lenten quality all year long.