Keep giving Satan an inch and he will become a ruler! In thirty-one letters from hell, C.S. Lewis exposes the wily ways of the devil as Screwtape teaches his nephew, Wormwood, the art of temptation. Martin Luther writes, “The best way to drive out the devil, if he does not yield to texts of Scripture, is to jeer and flout him, for he cannot bear scorn.”1 That's what C.S. Lewis does so well, mocking devils with names like “our father below,” Glubose, Scabtree, Triptweeeze, Slubgob, and Toadpipe. At the annual dinner in the Tempters' Training College for young devils, Screwtape is the guest of honor. He gives a toast saying, “Your Disgraces, my Thorns, Shadies and Gentledevils: let us toast Slubgob and the College [of Tempters]!”2

The bible does not treat Satan so lightly. St. Peter writes, “Your adversary the devil is prowling around like a roaring lion seeking someone to devour” (1 Peter 5:8). In the stories of Harry Potter, devilish beings are called dementors. “They are among the foulest creatures that walk this earth. They infest the darkest places, they glory in decay and despair, they drain peace, hope, and happiness out of the air around them. … Get too near a dementor and every good feeling, every happy memory will be sucked out of you. The dementor will reduce you to something like itself … .”3 “When [someone] goes over to the Dark Side, nothing matters to them anymore. … Dementors force their victims to relive the worst memories of their lives, and to drown, powerless, in their own despair.”4 We know that no one ever escapes from hell.

C.S. Lewis writes that our demonic tormentors, “… know the surest way to lead us to hell is the gradual one-the gentle slope, without sudden turnings, without signposts.”5 At the Manchester Art Gallery in England there is a painting by John Spencer Stanhope on the temptation of Eve. The Serpent is whispering into her ear, and you can tell by the look on her face that she is enticed by the temptation. Eve does not notice the serpent's long tail going up and over a branch, gently pulling it down to her raised hand, so that her fingers wrap easily around the forbidden fruit. Knowing the consequences we want to cry out, “Don't touch it!” But she sinned even before touching it. 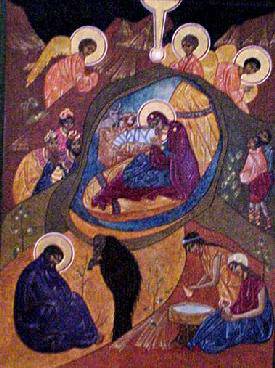 Our Cistercian father, Baldwin of Ford, writes that the first sin was not disobedience but disbelief. The serpent said, “You will certainly not die.” Adam and Eve believed the Serpent rather than God, making God a liar. They gave to Satan the honor of faith which should have been given to God.6 After their willful disbelief and subsequent disobedience they did die, first spiritually-when the Holy Spirit was forced out of their disbelieving hearts and Satan entered them; and later physically-when they returned to dust.

When Jesus encounters Satan it is no longer in a garden but in a wasteland, because demons bring death, decay and despair. In our guest house we have an icon showing St. Joseph sitting on the ground with a devil standing before him like a vulture, tempting him. The leaves on a little tree in front of the Seducer wither away at his evil presence. But Joseph and Mary believed the messages of God given by angels and not the deceptions of Satan.

Now, some thirty years later, Jesus and Satan come face to face in the desert: the liar and the Truth, the creature and the Creator, the wolf and the Good Shepherd. The first temptation rejects the way of belief: “If you are the Son of God turn these stones into loaves of bread.” It's as if Satan is saying, “Don't ask me to believe! Prove who you are by signs.” Later, children of the father of lies will repeat this temptation , “If you are the Son of God, come down from the cross!” (Mt. 27:40). Jesus replies, “One does not live by bread alone, but by every word that comes from the mouth of God” (Deut. 8:3). Death entered by the first sin: disbelief. Now life is restored by believing Jesus, who is the Word of God. 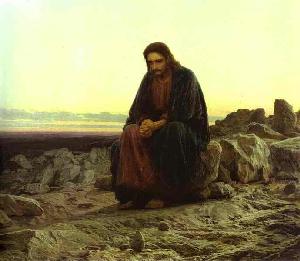 The second temptation again rejects the way of faith when Satan stubbornly repeats the temptation for a sign: “If you are the Son of God throw yourself down, for it is written, 'He will give his angels charge of you … lest you strike your foot against a stone.' ” Jesus replies, “You shall not tempt the Lord your God” (Deut 6:16). Satan is stubborn. Every mortal sin can be forgiven except stubbornness in evil.

The third temptation exposes the real motivation behind everything that Satan does. The Deceiver repeats his own original sin of pride, wanting worship, wanting God's place. Satan offers a bribe: “All these [kingdoms] I will give you, if you fall down and worship me.” Jesus replies, “It is written, 'You shall worship the Lord your God and him only shall you serve' ” (Deut. 6:13).

Who is being tested here? Is it Jesus? Or, is Jesus testing Satan, tempting him to faith and worship? And who fails the test? It is clear. Jesus says, “Begone, Satan! And the devil left him.” Demonic tormentors are driven out of the hearts of those who choose to believe, worship, and obey the Word of God in Jesus.

Archbishop Sheen writes, “We have more temptations to be good than we have to be bad.”7 We have the voice of conscience, the good example of others, the guidance of God's Word in the Sacred Scriptures, the consolations of God's presence in the Liturgy, especially the Eucharist, the lives of the saints, the encouragement of parents, friends, teachers and preachers, and the good inspirations of angels and the Holy Spirit. By believing, worshiping and obeying we are guests of honor at the banquet Jesus is giving in this Eucharist and in the kingdom of heaven.