Founders of Citeaux, at Our Lady of the Mississippi Abbey, Jan. 26

Solemnity of Founders of Citeaux

Today we celebrate the feast of our founders, Saints Robert, Alberic, and Stephen. But in the provocative final sentence of her new book, titled The Cistercian Evolution, Constance Berman, professor of History at the University of Iowa, writes, “What can be said definitely here is that not only was the Cistercian Order not founded in 1098, it was not even founded before the death of Bernard of Clairvaux in 1153.” Those are fighting words, but in fairness to Dr. Berman, her challenge is directed at the date of the juridical foundations of our Order, not at its physical beginnings by the 21 monks who left the Abbey of Molesme to start a new monastery near the third milestone along the old Roman road. Did that little milestone, known in Latin as “cis tertium lapidem,” give us our name, Cistercian, and mark the beginnings of our Order, or not?

In the 15 volume New Catholic Encyclopedia, published this year, C.H. Talbot writes, “Until recent years [St. Stephen Harding] was thought to have written the Charter of Charity and the Little Exordium … but manuscript research has shown that these documents, in their present form, belong to a later date, and are the product of a gradual evolution in Cistercian legislation.” Are the real founders of Citeaux as an Order actually anonymous monks of a later generation?

Our fellow Cistercian, Fr. Chyrsogonus Waddell, thinks that some readers will react to Dr. Berman’s book with bewilderment, perhaps even anger. He writes, “… it is unpleasant to contemplate the possibility that much loved documents such as the Exordium Parvum and the Carta Caritatis are the result of fraud perpetrated by a less than scrupulous group of third…generation Cistercians bent on creating a past that never was… But if this is the conclusion that emerges from a careful examination of the evidence, so be it.” Then in a study over 60 pages long he skillfully examines the evidence and concludes, “…the book, in its major theses and in many of its details, is simply wrong.” There’s no need to search for new founders, we don’t have to stop our celebration.

Elizabeth Freeman, an historian at the U. of Tasmania in Australia, asks “Is the book worth reading?” She answers in the affirmative, because it prompts us to reflect on the various ways our monastic Order exists: in our legislative documents, certainly, but also in our day-to-day practices and rituals, in our buildings and works, and in all the women and men who live a life of prayer and charity inspired by the example of our founders. The genius of Robert, Alberic and Stephen is evident not only in legislation that evolved from primitive documents begun in the earliest years of Citeaux’s existence but even more in the handing on of their spirit for over nine hundred years. Elizabeth Freeman emphasizes that our founders’ spirit of love is more important for the Order than their written documents. It is not only a charter but their charity that created our Cistercian Order.

An outstanding example of the love our founders modeled and communicated is Henri Mauriffe, a wealthy French count who traveled to Ireland in 1832. He was 24 years old when he came upon the newly founded monastery of Mount Melleray in county Waterford. Sixty-four monks, expelled that year from Melleray Abbey in France by an anti-clerical government, were building a new monastery. They were extremely poor. Henri Mauriffe was so impressed by their love of this way of life and of each other that he asked to join them. After making the necessary preparations he left his own country, his father’s house, and his native language to become a man of prayer and penance in Ireland. He joined at age 26, taking the name “Br. Julius” and he gave his wealth to help build the Abbey. Sixteen years later, Abbot Bruno asked Br. Julius if he would go to New Melleray, to take the place of one of the six monks who died of cholera two months earlier while traveling up the Mississippi river. He knew it was a dangerous journey and a much harder life, but Br. Julius said yes. For the second time in his life he left home and country to travel across the Atlantic ocean into the heart of a very foreign land, never to see his relatives again. During the rough voyage an 18 year old sailor slipped overboard and drowned. One of the monks, Br. Hilarion, fell and broke his collar bone because of the severe pitching of the ship during three weeks of extremely stormy weather. Br. Julius was sick the whole time. The oldest monk, Br. Francis, 63, became so ill he died and was buried at sea. After six weeks they reached the Mississippi delta and began sailing to New Orleans. Then a sudden storm with the force of a hurricane tore the sails away and drove the ship back into the Gulf of Mexico and nearly sank it. When calm returned it had to be towed back to the river by a steamer. Br. Julius and the monks with him finally reached the humble wooden building of New Melleray eight weeks after they left Ireland. He was 42 years old, and lived another 13 years. Twice in his life time, he showed that a powerful, rich young man of noble birth could also be wise and follow Christ with his whole heart, in his case as a Cistercian monk. But without the wisdom and love handed on by Saints Robert, Alberic, and Stephen there would be no community at Mount Melleray or Wrentham, no such place as New Melleray or Mississippi Abbey, and no foundations at Ava, Missouri, or Tautra, Norway. In short, no Cistercian Order. For it was not a charter but charity that made our founders salt of the earth and shining lamps who handed on their way of life, their ordo, so that like them we may contemplate and savor our Lord Jesus Christ, and intercede for all people. 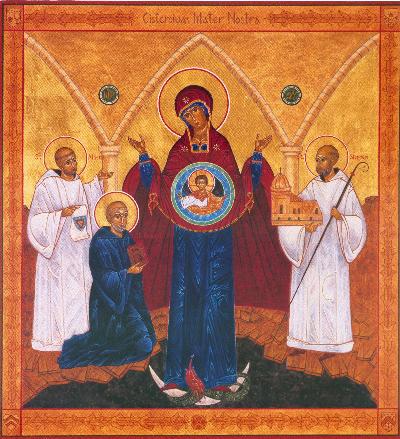 This icon of “Our Lady of Citeaux and the Founders of the Cistercian Order, Saints Robert, Alberic, and Stephen Harding is the work of a monk of Saint Joseph’s Abbey, Spencer, Massachusetts. The following description is on the back of the icon.

The icon depicts Our Lady of Citeaux with outstretched arms and her wide mantle enfolding the three Founders. An icon always presents theological truth by means of line, composition, color, and a variety of perspectives. In this icon curved perspective is seen in the tops of the mountains as they bend toward Christ in adoration, for as the Psalmist says, “Before you all the earth shall bow” (Ps. 65). Inverse perspective is seen in the slabs of rock upon which the founders stand extending the sacred space outward toward the spectator where an encounter with the holy may take place. The majestic scale of the Virgin (the perspective of importance) places her in a position of prominence, accentuates her holiness, and moves her toward the spectator. At ground level she stands in front of the founders, at shoulder level she is behind them, since Divine Reality is not subject to the limitations of gravity, time, or space. With her hands lifted in prayer, her arms extended in an embrace, and her mantle draped in a gesture of protection, the Virgin’s preeminence in Cistercian spirituality is clearly shown.

The Infant Christ is seen in three concentric circles of heavenly light. Each circle grows darker as it moves toward Christ. It would seem that the brightest circle would be closest to Christ the source of light, but the icon presents not created, but the uncreated light of God which shines out of the darkness of mystery.

With her head tilted to one side, Our Lady pleads with all Cistercians to take note of their Founders’ actions and imitate them. St. Robert (the first Founder, still in black for it was his successor, St. Alberic, who introduced the white cowl) reminds Cistercians to live the Rule; St. Alberic, to look to the Virgin in all their needs and be faithful to their charism; and St. Stephen, to present themselves as worthy sons and daughters of Citeaux and temples of the Spirit.

Iconographic facial features convey spiritual truths. Their eyes are wide, absorbed in the Beatific Vision; their mouths closed in silent contemplation; their ears uncovered in rapt attention to the Word of God. The deep furrows in the cheeks of the Founders give evidence of fasting and long prayer vigils.

The architectural background and the decorative border point to contrasting currents in Cistercian art and architecture. In the 12th century, manuscript illumination could be highly decorative, while the architecture was characterized by great austerity. The Latin title at the top of the icon is translated “Citeaux our mother.”