Fourth Sunday in Ordinary Time at Our Lady of Mississippi Abbey

In Francois Mauriac’s novel “Woman of the Pharisees,” the title character, Brigitte Pian, is scorned, hated, and reviled. She loves to think of herself as reflecting the beatitude of the persecuted: I am hated because I stand against the ways of the world. But in actuality, she is hated because she is hateable. She meddles in the affairs of others. She is selfish with her goods. Her outside is very pious, but inside she is full of envy, jealousy, greed and hurt feelings. She is “La Pharisienne”, the Pharisee woman, a master in the art of self-deception.

When she tries to prevent the marriage of her housemaid, Octavia, to the teacher of her stepson, she is told it is no business of hers. Mauriac writes, “Madame Brigitte forgave the hand that held the weapon. She always behaved like this when people told her she had committed some injustice. Instead of admitting her fault she turned the other cheek, protesting that it was well she should be so misunderstood and vilified. In this way she added another link to the armor of perfection in which she went clad from head to foot. If on such occasions her interlocutor was driven to speak angry words, this gave her a feeling of still greater excellence at the bar of her own conscience” .

Secure in one of the beatitudes, she sought evidence for others, like poverty of spirit. Mauriac writes, “There had been a time when she was worried by the spiritual aridity that marked her relations with God; but she had read somewhere that it is the beginners on whom the tangible marks of graces [of consolation] are showered to set them upon the right path. The kind of sensitiveness that afflicted her was a sign that she had long ago emerged from those lower regions of the spiritual life where fervor is usually suspect. In this way her frigid soul was led on to glory in its own lack of warmth” . 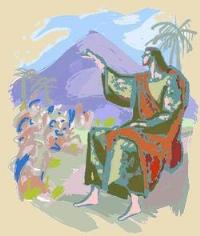 Her conscience, however, gave her no peace. Brigitte identifies the torments of her conscience as an intense case of scruples until her stepson, speaking frankly, tells her that the source of her suffering might not be from scruples but from remorse for real sins. Stealing some of her craftiness he urges her to seek absolution in confession. He says, “It will be hard, of course, but by so much the more will you acquire merit.” The word merit made her head rise. He continues, “It would be beyond the strength of most people, but [not] you…” She straightened up still more .

By confessing she might even acquire more beatitudes: like the blessedness of those who mourn for their sins, or those who hunger for righteousness and for purity of heart. She reflected that it is God’s way to turn even our sins to his own purposes. So, she attached great importance to her faults when she made her confession. The confessor, who knew her well, told her not to substitute for the illusion that she was a person well advanced along the way of perfection, that other, no less vicious illusion, that she was a notable sinner .

We also probably need to worry less about whether the world hates us for embracing Christ than to ask whether perhaps we are a bit too much like the Woman of the Pharisees who suffered more from the eight capital sins than from the eight beatitudes.

This Eucharist is meant to make our inside and outside more truly Christian, more in harmony with each other, so that one day before our death and rising, we shall like Jesus, become worthy of the world’s rejection and experience what it really means to live in both the suffering and happiness of the beatitudes.