Homily for the Fourth Sunday of Lent at Mississippi Abbey

“One thing I do know is that I was blind and now I see.”

The man knows One Thing and it is all he needs to know. He builds his life on it.He was blind and now he sees. It is a classic image of conversion as freely given grace. The man did not ask for a cure. He is both born blind and given sight so that “the works of God may be made visible through him.” Jesus makes the first crucial point about conversion: it is not and cannot be a product of merely human knowing, choosing, or acting. It is GIFT.

A man born blind symbolizes the human born with a disease of perception. One suffers from the self-centeredness of Original Sin. “Suffering” is important if one is to desire and realize the gift of conversion. The One Thing the man knows is that once he suffered and, being born blind, did not know what else to even want except anything other than what he had. And he thereby knows that 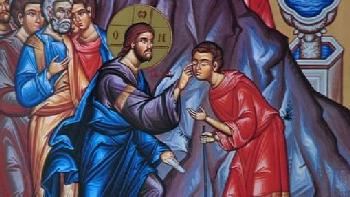 this change in perception is sheer gift. This is and will always be the great fact of his life…of any life to whom it is given. His conversion experience may be an event, but its purpose and effect is to make him useful to God and neighbor for the rest of his life. That is how the works of God are made visible through him.

The change in perception is a second crucial point Jesus wants to make about conversion. It is a radical change in the horizon against which one views the world and her experience. That new horizon is the light of Christ, Who is FOR others.  Jesus wants us to notice the contrast between the views of the newly-sighted man and the views of the man’s neighbors and even more the Pharisee’s. The metaphor, as Jesus emphasizes, is about interior blindness. Jesus said to the man, “I came into the world to bring everything into the clear light of day, making all the distinctions clear, so that those who have never seen will see, and those who have made a great pretense of seeing will be exposed as blind”[i] To the Pharisee’s (the religious leaders) who have guilt, but no shame, he says, “If you were really blind, you would be blameless, but since you claim to see everything so well, you’re accountable for every fault and failure.”[ii] Sisters, as religious this should alarm us! There is a danger that when we know everything we can be taught nothing. 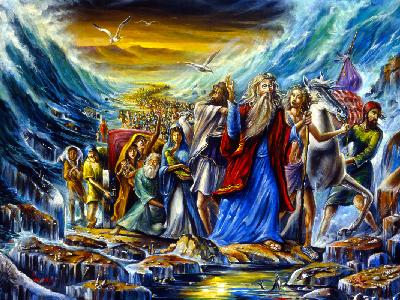 In last week’s gospel of the Samaritan woman, Jesus made a third crucial point: The crux of conversion is turning from sin and moral impotence and turning the heart to God. It is accepting the New Law written by the Spirit in the heart. This means the will is now moved by God, rather than self. Aquinas calls this “Operative Grace.” One becomes “antecedently willing” to do the good that she was previously unwilling to do. It is not a burden; it is the fulfillment of a genuine desire! Selfishness is rejected in favor of usefulness to others.

In this and last week’s gospels the Jewishness of Jesus is emphasized. The great fact of the Jewish people is the Exodus; the experience of bondage, liberation, and covenant that made them God’s chosen people. We see that in the blind man’s experience. Blindness symbolizes the bondage of self; a life of worry and self-preoccupation. Jesus, the Son of God, liberates him by the waters of Siloam. When the man professed his belief and worshiped he preferred Jesus to everything. That is the covenant. That was the fourth crucial point about conversion: we co-operate with this gift by entering into a covenant, a religious commitment. 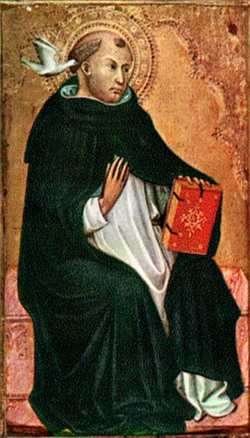 The struggle that results from God’s free gift of grace and our finite ability to respond is the central dynamic in the process of conversion. We engage this struggle in covenanted community. We must keep close to our liberator and we can only do that if we never forget the experience of bondage.  That is what happens when we say, “One thing I do know is that I once was blind and now I see.” Religious communities are not formed around “being cool”; they are formed around noticing the works of God in one another and thereby sharing affection for that God.

What the converted sees is a new center of value, of what matters most. Conversion is not just for those living an immoral life. It is also experienced by those desiring to be a better spouse or better monastic. The seniors are an example of this. This shift in the center of value effects the four crucial points Jesus is making about conversion, about this walking in the light of Christ. It is experienced as a gift that, in our fallen self-centered natures, we did not even know enough to want. Yet it is everything we have ever wanted. Most importantly, conversion is a falling in love with God. We are enabled to love in a way that we did not love before.

And when we’re able to do that we are free! As the old saying goes, “You’ll dance like nobody’s watching and you’ll love like it’s never gonna hurt!”

[i] The Message Bible

Today's gospel about the prodigal son teaches us some very important things about what it is like to be a Christian on the inside. As Cistercians our interior life is one of “setting love in order.” The story of the prodigal shows how this is begun. As monastic's living a vow of conversion, we are most interested in the path the son took to his conversion. How did he get from being for himself to being for others?

Tax collectors and sinners were gathered around Jesus and listening. Religious leaders were not. So first we notice that sinners know they need Jesus. This “need” was experienced as shame, a very healthy emotion. It was shame at the kind of person they had become. The religious leaders did not feel this. The shame of the sinners brought them into a relationship in which the promise of forgiveness stood there before them. That's an important part of what it's like to be a Christian on the inside. 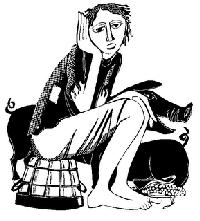 The religious leaders personally witnessed this event of Jesus teaching and dining with sinners. Jesus tells the leaders a story to help them understand what they are seeing. He tells them of a son who experienced the love and generosity of his father, but turned away from it, preferring the pleasures of the world. He would no longer be a receiver of the enduring good, but, driven by a will-to-control, would grasp what merely satisfied for the moment. His return to the father, his right ordering of love, began with shame. Luke describes it as “coming to his senses.”

Shame grows out of our strong interest in being a good person. We all have it. Shame preserves self-respect. “Strong interest,” though, is not the same as well-ordered love. We know “being a good person” means meeting standards set by someone else and affirmed by ourselves. And we know it is a lifelong commitment. Knowing these things, though, does not necessarily give us the power to live them. 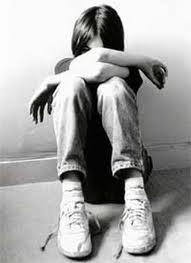 When we compromise this interest with self-seeking of pleasure and ego-gratification, we find it necessary to soothe our altruism with excuses, with defense mechanisms. Jesus' prodigal son shows what happens when the excuses fall apart, defenses are shattered and love is disordered. Shame happens. Jesus is showing us what a gift shame can be.

Shame is a backward way of showing that we really are connected to the authentic values of life, to that which is important in itself, rather than because of how it makes us feel. Shame is proportionate to the value it upholds.

Shame arouses the son's taste for the love and forgiveness of the father and return to the father's way of life. He is willing to be a hired worker because they are for the good of others. This change in taste is the second way the prodigal “comes to his senses.” 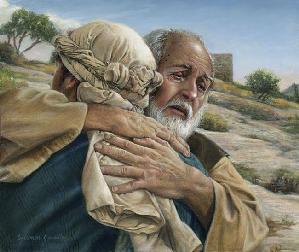 St. Bernard would tell us that the prodigal's shame is the beginning of his wisdom. Bernard defines wisdom as “a taste for authentic goodness.” Authentic goodness is “pro-existence”: living for the good of others. Being for is the innermost essence and the entirety of Jesus Christ. Thus, being a Christian on the inside should be a willingness to have love set in order for the sake of living for the good of others. But we fall short.

Shame must get through to us and persuade us to take the worth of Something other than self so seriously that the wrong of not reverencing it upsets us. To do this, as the gospel tells us, usually requires a crisis. And if in this crisis we can “come to our senses,” then in humility we can allow our love to be ordered. Humility is not thinking less of oneself, but thinking of oneself less.