Easter, consider the way it did not happen: It was the first day of the week, Jesus’ disciples were scarcely able to contain their excitement any longer. The glorious day had arrived! As soon as the Sabbath was over, Mary Magdalene, Mary, the mother of James, Salome and the eleven apostles, accompanied by other followers of Jesus, made a triumphant procession singing hymns and songs of thanksgiving as they went to the garden where Jesus was buried. This caused great wonder among the inhabitants of Jerusalem, and many joined the disciples that day. When they arrived at the tomb they saw that the stone, which was very large, had been rolled away just as they had expected. And behold! Looking into the tomb there was a young man sitting there, clothed in a white robe, and they were beside themselves with joy. The angel said to them, “You seek Jesus of Nazareth, the crucified. He has been raised. He is not here. Behold the place where they laid him. He is going before you to Galilee, there you will see him, as he told you.” Then Peter entered the tomb and after carefully gathering together the linen wrappings he stood at the entrance, and lifting them high into the air before the other disciples he proclaimed, “The Lord has risen!” And they responded with shouts of joy, “The Lord has risen indeed.” But that’s not the way it happened, is it? It is too contrived, not genuine enough to command our belief, something a serious seeker of the truth would discredit as pious fable.1 By contrast the Gospel is shockingly realistic. 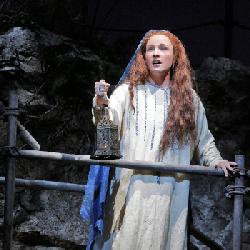 On the first day of the week three women came to the tomb with heavy hearts not to seek a risen Lord, but to anoint the dead, crucified body of Jesus, whom they had loved and lost. After a sleepless night, probably tossing and turning in anguish at the dreadful memory of Jesus’ agony and death, they expected nothing more than a corpse, the remains of one who had been so dear to them. And the men, the eleven apostles, fearful for their lives, did not even have enough courage to venture outside the locked room where they were hiding. After all that Jesus had said and done, after miracles and prophecies foretelling his death and resurrection, they did not consider it a possibility. They had no hope that he would rise from the dead, not even enough faith to check out the tomb on the third day to see if he really meant what he foretold.

The Resurrection was so contrary to their expectations that after an angel proclaimed the good news to the three women and said they should tell Peter and the disciples, St. Mark writes they were so confounded that “They fled from the tomb, for terror had seized them, and they said nothing to anyone.” It was too much for them to grasp. No one believed until Jesus made his first appearance. And the first one to whom Jesus revealed himself was, surprisingly, Mary Magdalene, from whom he cast out seven devils. To her, of all people, a woman and a converted sinner, was given the honor to be first in proclaiming the good news. But St. Mark writes that the other disciples, who were mourning and weeping over the death of Jesus, would not believe her. Would you? Only later, when Jesus appeared to the eleven and rebuked them for their lack of faith did they finally believe.

And that is the nature of the good news, of Christianity, of true discipleship. It challenges our disbelief, our despair, our lovelessness. It grows stronger when persecuted. It takes possession of us when confronted with the great moral choices of life between good and evil. It presses on for the great prize of life with Christ on the other side of cruel death. 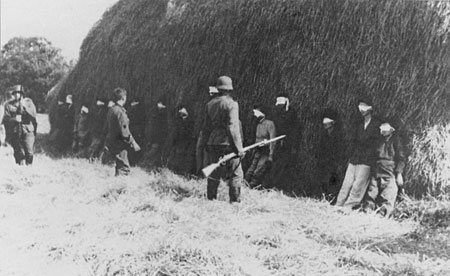 For example, during the dark days of World War II, amid the horrors that were committed by the Nazis, there were German Christians who faced the cost of Christian discipleship heroically, like Pastor Dietrich Bonheoffer and Blessed Franz Jaegerstatter, whose conscientious objections to the war cost them their lives. The story of Private Joseph Schultz2 is less well known. He was a German soldier on the Eastern Front in Yugoslavia. On July 20th, 1941, he along with seven of his brothers in arms were sent out on what they thought was a routine mission. After a short march they soon understood that they were on a quite different mission than what they thought. Ahead of them, they saw a number of captured civilians, peasant farmers, men and women, who were blindfolded , and positioned up against a haystack. The soldiers in his platoon were ordered to stop about fifteen yards away, and to execute every one of the civilians. Seven of the soldiers prepared their rifles, but Private Joseph Schultz , disobeying a direct order, dropped his rifle and walked toward the civilians who could not see him but heard the movement of a soldier’s boots approaching them through the grassy field. The young private took a position among them and chose to be shot rather than kill helpless civilians. The officer gave his orders: “Ready! Aim! Fire!” A few seconds later the peasants and Joseph Schultz were dead. He was executed by his own countrymen. That’s the power Christian discipleship gives us to overcome natural instincts and desires when faced with grave moral decisions.

Today our Christian values are being severely challenged as laws curtailing abortion here and abroad are signed away. Even a health provider’s right to conscientious objection against participating in an abortion is at risk. But the more our values are challenged, the stronger true discipleship often becomes. For disciples of Christ, the more we are denied, the more impact our witness has. Crucifixion is not the end. Resurrection is, and the beginning. 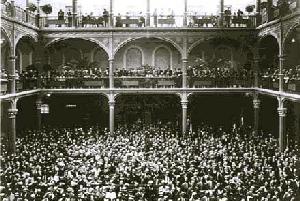 The more our faith is challenged the stronger it must grow. In 1930 Moscow sent a Bolshevik named Bukharin to indoctrinate the Christians of Kiev with Communism. At an hour long assembly he presented arguments against Christianity in favor of atheism. The force of his words was backed by the presence of the military standing at attention around the hall. Pleased with himself, he asked if there were any questions. One man snapped to his feet and requested permission to speak. Given the nod he went up to the microphone and stood next to Bukharin. Not a sound was heard as he looked out over the people, first to his left and then to his right. And then he shouted out the ancient Orthodox greeting, “Christ is risen!” Immediately the entire assembly stood up together and with one voice thundered their response, “He is risen indeed!”