Friday in the Octave of Easter

Homily for Friday in the Octave of Easter

Just two days after watching Notre Dame Cathedral burn, French citizens were astonished to learn that close to one billion dollars had been donated from all over the world for the church’s restoration, and some of them began to say: “You know, on the news, they keep calling Notre Dame – “some kind of icon of French culture”.  Well, if that’s true then maybe the new cathedral should be less Christian, and more representative of the shapeless amalgamation of diverse beliefs and ideologies that really is “French culture today.”

Such comments increased my suspicion that people watching Notre Dame burn on Monday of Holy Week, were not able to actually see what was burning or what lay in ruins after the fire.  I would like to suggest that it is Jesus lying in ruins after the burning of Notre Dame.  Now, Jesus, truly risen from the dead, is forever Lord of heaven and earth.  But, for centuries, Christian art has depicted Jesus, as the lamb who was slain, crucified, and standing, raised from the dead, the wounds still visible in his hands and feet.  Just so, Jesus lying in ruins in the middle of Paris, is still standing and he is talking to us, very much like the man whom the apostles meet standing on the shore in today’s gospel. 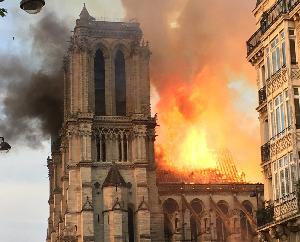 Notre Dame Cathedral, you may know is actually built on a little island in the middle of Paris.  It stands on a shore, like the place where the disciples saw a man standing.  Now, it is Jesus who is standing there, but the disciples don’t see Jesus.  They see a stranger.  Likewise, crowds of Parisians, staring at the smoldering ruins of Notre Dame Cathedral, see only a stranger with no name whom they call, some kind of “icon of French culture”, whatever that’s supposed to mean. 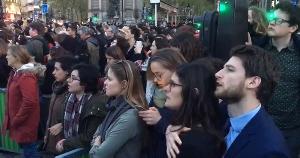 But this stranger, this icon thing, is talking to them, and they can hear him.  He is saying to them: “Children of France, dearest, and eldest daughter of the church; you have been burning down Notre Dame Cathedral for sixty years.  You’ve worked hard to distance yourself from your Christian origins.  Introducing a defiantly secular culture, you have become a Post-Christian nation.  Have you caught anything to eat?  You’ve worked hard through the long night of Post-Modernism.  How’s that going for you?  Are your efforts producing the food you need to live bodily and spiritually?”  Now a true Post- Christian Parisian, answers:  “We’re doing very well, thank you sir!  Things are so much better for us now, maybe the destruction of Notre Dame Cathedral is a good thing.” 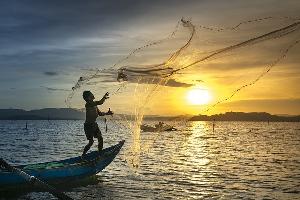 But if you are a person with any responsible adult’s memory of the Christian origins of France; if you are one of those young people in the photo posted on our bulletin board, holding rosaries and praying then, in the ruins of Notre Dame you meet a stranger standing who is addressing you, and asking if you’ve caught any fish.  And what can you say except: “No sir.  The truth is, we have little to show for all our mighty efforts to be the authors of ourselves.  We are not just hungry; we are starving here.  Who will save us from this body of death?”  And to these same young people, the stranger will say: “Try this.  Try casting your net in the opposite direction of the Post-Modern movement.  Give it a try and see what happens.”  Brothers and sisters, I am hopeful that a new generation may just give that a try and finding themselves hauling in quite a miraculous draught of fishes will say to one another: “It is the Lord!  The Lord, risen from the dead, is just as truly in our midst as the ancient walls of Notre Dame Cathedral.”  Easter is the time we celebrate the possibility that just such a conversion of hearts may yet transform France and the world.

Friday in the Octave of Easter 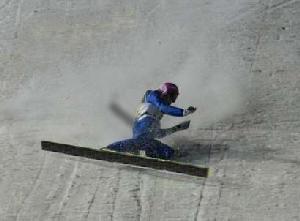 Once there was a sports program that recorded the failure of an attempted ski jump. The skier was in good form as he headed down the long ramp, but then he fell and slid to a painful stop. What viewers didn't know was that he chose to fall rather than finish the jump. As he explained later, the jump surface had become very slick. Midway down the ramp, he realized he was going too fast. If he completed the jump he would not land on the safe sloping area, but far out, on the flat level ground. It could have been fatal. As it was, the skier only suffered bruises and cuts when he struck the sides of the ramp. To change one's course in life may be painful, but that's better than a fatal landing at the end. As it is written in the Book of Proverbs, “There is a way which seems right, but its end is the way to death.”1 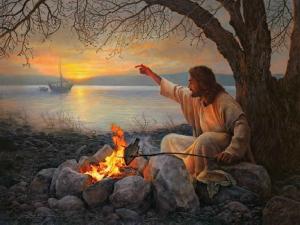 In today's resurrection appearance by the Sea of Tiberias the disciples of Jesus have returned to their occupations as fishermen. It's not the life that Jesus wanted for them. What better way to change the course of their lives than this dramatic repetition of a miraculous catch of fish reminding them of his promise to make them fishers of men? They were drifting, and now Jesus calls them back to his plans for them.

Cardinal Newman once wrote, “To live is to change, and to be perfect is to have changed often.” It is by obeying Jesus' call to conversion from self-seeking and drifting back to self-will that we will have the grace to avoid a fatal landing.