Homily for the Funeral of Fr. Neil Paquette

I read this to Neil when I was visiting late in the afternoon last Wednesday, the evening before he died.

“After this I saw a great multitude, wearing white robes and they cried out in a loud voice: ‘Salvation comes from our God, who is seated on the throne, and from the Lamb.'”

And Neil smiled, and with that smile all trace of worry, fear, and anxiety fell, for the briefest of instances, from his brow, and his face was clear and expectant and even joyful. It was from Chapter 7 of the Book of Revelation.  I read in Greek. Neil and I shared that, a love for the Greek New Testament.  Then I translated, reading from the English on the facing page.  I said, “Now, there’s something to think about,” and Neil said, “It’s true,” just like the day before when I read him the Gospel of the day, “They came and woke him, saying, ‘Lord, save us! We are perishing!’  He said to them, ‘Why are you terrified, O you of little faith?’ Then he got up, rebuked the winds and the sea, and there was great calm.”  And I said, “It’s really true,” and he said, “It’s true.” Then I went on with the passage from Revelation,  “All the angels stood around the throne. . . . They prostrated themselves before the throne, worshiped God, and exclaimed: ‘Amen. Blessing and glory, wisdom and thanksgiving, honor, power, and might be to our God forever and ever. Amen.'” 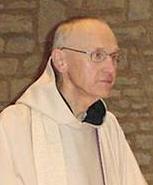 Neil smiled again, all fear and anxiety gone like the calming of the sea. Was it the exuberance of my performance, or the vision that the biblical text opened up to him, the hope of a nearly unimaginable alternative to his steadily weakening body in a hospital gown, to his frightened mind? I believe it was both, for the exuberance was simply an attempt to somehow match the unclouded, joyful certainty of the vision: “For this reason they stand before God’s throne and worship him day and night in his temple. The one who sits on the throne will shelter them. For the Lamb who is in the center of the throne will shepherd them and lead them to springs of life-giving water, and God will wipe away every tear from their eyes.” “Behold, I tell you a mystery,” says Saint Paul. But that is what the Good News is, a mystery recognized as true, “it is true,” especially by the dying and the most needy. “The corruptible must clothe itself with incorruptibility. . . . the victory through our Lord Jesus Christ.”

Tomorrow, July 11, will be the fortieth anniversary of Fr Neil’s monastic profession. It will also be the 23rd anniversary of his priestly ordination in this very church. July 11 must have been important to Fr Neil, and not only because of those personal  anniversaries, but prior to them and the reason for them, July 11 is the Solemnity of our Father Saint Benedict, author of the Rule for Monks that Neil and all of us made profession to live under. Saint Gregory says that if you want to know Saint Benedict just read the Rule he wrote, “for the holy man could not possibly teach  otherwise than he lived.” For many years Fr Neil had the practice of reciting the 12 degrees of humility from Chapter Seven of Benedict’s Rule of Benedict’s as he descended the stairs each night for Vigils. 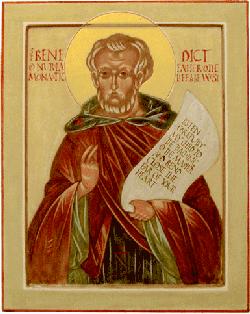 Death is always a darkness over all the earth, for at that moment our body with its diseases and wounds is all the earth to us, our body the dust from which we came and to which we will return. The sun of our treasured relationships and of a lifetime of who we were is eclipsed, the thin curtain separating us from the Unknown and the Mystery is torn in two.  At that moment, what the monk said at his solemn profession takes on all its meaning: “Receive me O Lord as you have promised,” or, as Jesus said dying, “Into your hands I commend my spirit.” You can say it happens to everyone; but it never happens to anyone, to you, until that moment when it does; the earth is pocked with innumerable tombs, tomb upon tomb, and yet, there is only one tomb, ours, a tomb where no one had every yet been laid.

On the day Fr Neil died there’s are news stories: of another priest killed in Mexico, bound and stabbed to death in his home, of a nun praying in a Brooklyn church approached by a stranger who says, “I am going to kill you,” of proposed legislation in Oregon adding an additional half-a-million dollars to the millions in state funds already spent on abortions, over 50,000 of them in the past dozen years in that state alone.

Insurance companies deny coverage for expensive life-saving treatments, and recommend, instead, doctor assisted suicide at a cost to them of under $2.00. Life is cheap. Death is something like waste removal, the bodies of the aged, the infirm, the inconvenient, and items for landfill. On the other hand, “the death of the saints is precious to the Lord,” says Saint 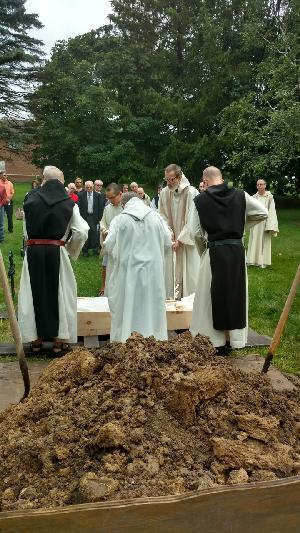 Bernard; and “if death is precious, what must life be?”1 “Our souls cannot give themselves up to God until death is swallowed up in victory, and until eternal light overflows the bounds of darkness and celestial glory clothes our bodies.” We cannot, says Saint Bernard, attain our final end without our bodies, nor would we want to. The soul does not want to be perfected without the body that all through life has benefited it in every way. But when that desire is appeased, when the one thing lacking is supplied, the resurrected body, then, what should hinder her from yielding herself utterly to God, losing her own likeness and being made and more like God?

“I need to be less self-centered. I need to be satisfied with the way things are.” Fr. Neil made that confession in a letter to family a friends two years ago. “Where I am at the present is the starting point.” Happily, the end has little to do with us, except to receive it:  “Thanks be to God who gives us the victory through our Lord Jesus Christ” (1 Cor 15:27). It is true.