When one of our monks dies I go through their file to see if they have any request for their funeral such as relatives to call, special readings, or music. I think only one monk had a request and that was Br. Raymond who wanted a particular song for his funeral. Br. Raymond who was one of the quietest men you ever met surprised me by asking to have the theme song from the movie Return to Bountiful!

When I was looking through Br. Al's file there was nothing special but I did run into a phrase that seemed to me to shine a brilliant light over his whole life. What is extraordinary about it is that it was not meant to be extraordinary or theological in any sense of the word. It was a simple answer to a simple question. You know Br. Al got permission to leave the monastery in 1963, after being out for a while he married a wonderful women and when she died he waited a year and applied to enter the monastery again. He answered the question on the application form, “What is your predominant reason for wanting to enter religious life?” with the words, “I feel God is giving me a second chance.” No exaggerated idealism here, no words to impress; just an honest answer. He knew he blew it the first time but humbly asked for a second chance. 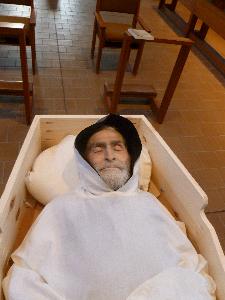 Seen in the context of Al's life and through the lens of death the answer is a spiritual gem. It expresses beautifully a whole way of life, a Christian philosophy of life in community. Al got his second chance and has now done something none of us has yet to do, he persevered to the end. You don't hear much of this anymore but it is still wise to pray for the grace of final perseverance. Al received it.

A funeral homily is meant to draw out how the mystery of Christ was lived in the deceased. How this happens is often hidden from us, we live by faith not by sight. We see appearances, God sees the heart. By appearances Br. Al contributed a lot to our community by his work skills but we did not see his heart where the experience of being given a second chance bonded him to the mystery of Christ reconciling the world to himself. Every time we celebrate the sacrament of reconciliation we are given a second chance. 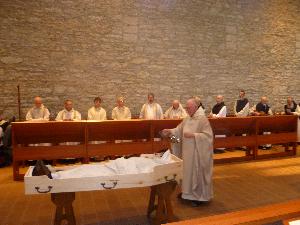 Somehow I believe death reveals aspects of a person's life that everyday experiences hide from our eyes. I see Br. Al now as a humble man, one who could identify with the Publican who prayed, “Lord have mercy on me a sinner.” To be able to say that in all sincerity as a summery of your life is what St. Benedict says is the goal of the monk. Br. Al has reached the goal God set out for him and leaves us a legacy of humility and forgiveness, “I feel God is offering me a second chance” Al took it and I can imagine that last Friday while we were at Mass and the Lord came for Br. Al, as they embraced, Al said, “Thank you Lord for giving me a second chance.”