No one will deny that Fr. Daniel was a remarkable man. Everything about him was remarkable: his age, his strength of body and character, his forthrightness, his insights and his ability to help others. Just last night at the wake a man came up to me and said many years ago he came here on a Friday evening and told the first monk he met, Fr. Daniel, that he was going to committee suicide. His wife did it and he could not go on and take care of two small children. Fr. Daniel told him to wait, make a retreat and if he felt the same on Sunday evening then it was his decision. When he left on Sunday evening he was feeling great. I asked him what happened and said he was touched by God so deeply that it has never left him. Remarkable. 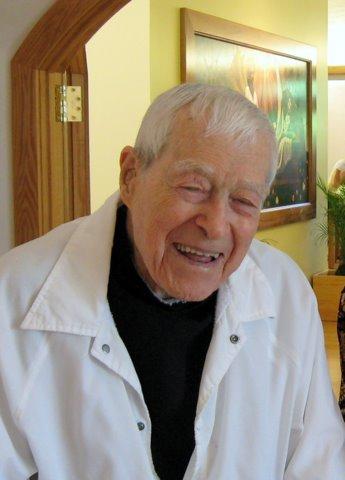 Fr. Daniel was 48 years old when he was ordained. Who but he could plan for his 50th anniversary at age 98 and be the main celebrant and homilist? Remarkable. We have a copy of the homily he preached on that day, it was May 3rd 2005. In his homily he reminisced about coming back from the Second World War on a troop ship in 1945. He is sleeping on the top bunk and remembers a soldier shaking him and saying, “Hey soldier you've been dreaming and we are approaching New York you better get out.” He concludes the story by saying, “…and I am still dreaming.” What a wonderful thing to be able to say at the age on 98 and after 60 years of monastic life. “I am still dreaming.” This reminds me of the words of Joel the prophet speaking about better times he says, “I will pour out my spirit, and your old men will dream dreams” (Joel 2:28). Dreams are not for old men usually because they do not have enough time to see their dreams fulfilled. But Fr. Daniel is an exception in more ways than one. At 98 he was not an old man and at 104 he was not old. It was only about three months before his 105th birthday that he started to show his age. Whenever we sing Psalm 91 and come across the words, “…still bearing fruit when they are old still full of sap, still green” I think of Fr. Daniel. 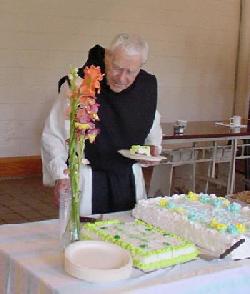 We still have a copy of the first homily Fr. Daniel preached in 1955. He begins by asking did you ever wish for anything, in other words what are your dreams? He goes on for two and a half pages telling us what he is wishing for, his dreams. It is too long to go into here but there are some exceptionally beautiful passages. The main wish the newly ordained Fr. Daniel had was to see God. Not just in heaven but on earth. He enumerates the ways such as in nature, in other people etc. and then says, “I want to see him in dryness and humiliations, in sickness and health, in the ill and the blind, in the struggles and follies of my life. There are light and peace and sweetness in Him, a splendid light, a peace above anything that could be desired, and sweetness that surpass all the consolations of the earth.” This is Fr. Daniel telling us who he is and he lived everything he believed in. When he was Guest Master many, many people came to him with their troubles and he must have passed on some of that light and peace and sweetness in his soul to them because so many became lifelong friends. 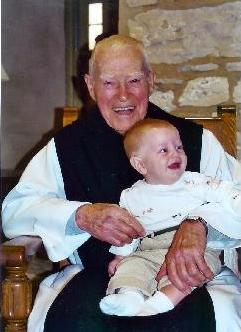 It is not easy to combine a strong manly character, which we all know Fr. Daniel had, with sweetness, but somehow he was able to do it. I think it was the sincerity and authenticity he possessed that allowed people to trust him and open their lives to him. This produced a bond which was sweet. But there was something else. Fr. Daniel had a true, almost innate, moral conscience but he was not moralistic. Conscience connects to something outside the self which enhances the self. True conscience, someone said, provides an inner voice, a moral echo, a spiritual reverberation. A conscience like this cannot be acquired by study but only by prayer. When people see someone who is authentic and yet does not base it on himself but from a mysterious inner life they trust that person and accept him as a guide in the spiritual life.

We all know Fr. Daniel could be very direct and I had some interesting exchanges with him over the years. When he was 99 I discussed with him the need to quit driving himself to the doctor. I said it is too dangerous. His instant reply was, “If I was a dangerous driver I would be the first to tell you.” How do you argue that? Another time starting when he was maybe 103 he used to be reluctant to get a haircut, when I mentioned it to him a few times he quipped, “I am the only one who can grow hair around here!!” Again how can you argue with that! 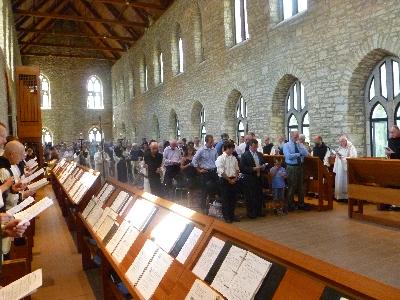 A funeral homily is not supposed to be a eulogy but rather a proclamation of Christ's victory over death. But as I look at Fr. Daniel's life and really at any of our lives I think they are all a victory over death. As baptized Christians and Catholics we are living out in our own way the life of Christ. A basic principle of the spiritual life is that the faithful are continuing to live in their own way the life of Christ. St. John Eudes says it beautifully, “The son of God wills to give us a share in his mysteries and somehow extend them in us” (Breviary 33rd week of Liturgical year).

Fr. Daniel's life was truly an extension of Christ's life, God's love incarnate once again in Fr. Daniel's love. John Eudes again, “Jesus desires that whatever is in him may live and rule in you: his breath in your breath, his heart in your heart, all the faculties of his soul in the faculties of your soul, so that these words may be fulfilled in you: Glorify God and bear him in your body” (ibid). As I said, Fr. Daniel helped many, many people during his life time and now in heaven he can help us at the level of the heart, help us bear Christ in our heart and let Christ live again through us. 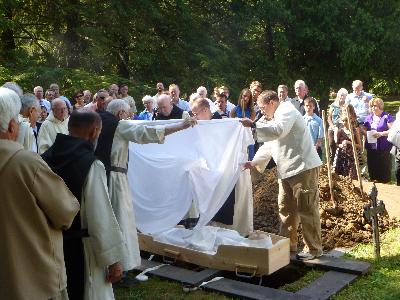 I will end with the closing words of the first homily Fr. Daniel preached in 1955: “Getting back to my ordination day again, what did I mean when I said I love thee, I am Thine, I belong to thee without reserve? And in this giving is my joy, my rest, my happiness. When the word love is pronounced, nothing remains but to continue it always. I love thee; I have surrendered myself in the one I love. I have died that I may live. Oh, if I loved God like that my life would be one living and indestructible 'I love thee.' And my death would only add to this word two others to perpetuate it and consummate it, perfectly and forever.” Isn't this the way of life where He is in Heaven? Yes, and now Fr. Daniel's dream of wanting to see God is no longer a dream it is a reality and he can now for the first time love God perfectly and forever.