Jesus said to his disciples in today’s Gospel, ” you know the way”. How true of Br. Augustine. He knew the way to follow Jesus for 68 years of monastic life. Br. Augustine entered New Melleray in 1936. This is a little hard to take in. The life of a Trappist monk in 1936 was not easy. Br. Augustine did not take naturally to austerity. He was not the athletic type that enjoys a challenge. He was quite, retiring, gentle. Yet he set the record for perseverance of any monk of New Melleray – 68 years!

Reflecting on his entrance to the monastery in 1936 he wrote, ” Part of me was afraid of the rigor, fasting, silence, but in living it I received so much peace and joy that the hardships seemed small in comparison”. Gus was not attracted to the rigors of the life, the observances or even the traditions of the Order. I was always suspect of this when he was sub-master of novices. What is he teaching them? He never gave the novices the party line, the official teaching, yet the novices flocked to him. What was he giving them? As I look back now I see the he possessed the meaning of what the observances were all about. The peace and joy they are meant to give. When you have the reality you don’t have to spend a lot of time on the means. Gus by-passed a lot of the rhetoric and got right to the heart of the matter. 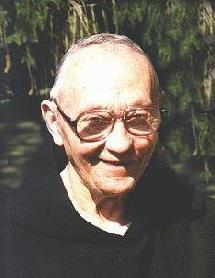 Writing about his vocation he said, “I suppose one could say I was led by joy”. In his early twenties growing up in Crete, Nebraska he wrote to the Holy Cross Fathers for a book on the various types of religious life. Paging through it he came to the Trappist. In those days there were only three Trappist monasteries in the States. When his eyes fell on the Trappist he said, ” that page sent such a thrill of joy through me it left little doubt about what God was saying to me. It was confirmed”, he said “the next year or two by a sense of peace whenever I thought about New Melleray. This peace and joy never left Br. Augustine during his 68 years with us. He seemed to have a direct communication with God. He was in touch with his interior life where God spoke to his heart. The “thrill of joy” was the voice of God in him.

Br. Augustine kept himself pure in the sense that he never got involved in the politics of the monastery, he never gossiped about anyone or anything. He just went blissfully on his way. He was a true lay brother. He said, ” I was so fortunate and grateful for the many years of work spent in the world of nature. God is always more evident to me in gardening and farming”. Nothing seemed to get him down, nothing discouraged him. He liked the quote, “There are no problems. There are only opportunities” 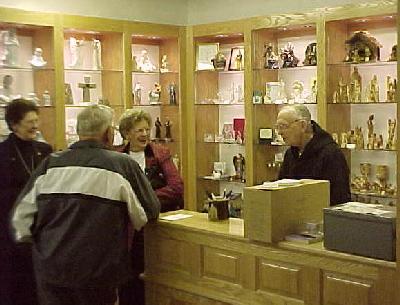 To live this way takes a lot of strength. Underneath his meekness was one of the most persistent of men. I would characterize him as gentle persistence. Most of us have to toil at learning how to be a monk. We have to try over and over to acquire the proper dispositions of patience and inner peace. Gus seemed to just have it! People recognized this in him. He has been such an encouragement to so many people. He has helped so many people through hard and difficult times just by being his sweet sincere self. It all comes down to attitude. My nephew has a poster in his kitchen that proclaims, “All I can change is my attitude.” Br. Augustine would have liked that poster. He had a most positive attitude toward life. No one was excluded from his charity. He was the most inclusive of men. In years of late he would come to me after he had been notified that he won 30 million dollars in the clearing house sweepstakes! I couldn’t convince him it was a gimmick. He wanted to give the money to the poor. When I would point out that you had to buy a years subscription to “Field and Stream” and that we had no use for the magazine, he would want to give it to the sisters at OLM! I think he would have given the devil a tour of the cloisters if he came into the gift shop.

So our senior monk has left us. He gave us 68 years of his life. He saw tremendous changes in the world and in the church during those years but I never heard him say the old days were better. He was eternally young and not only liked the new but embraced it. He could do this because he had his stability within. The devotion he had to the Little Flower in his 20’s stayed with him in his 90’s. Life around him could change but he was not thrown off balance because he had such a secure and abiding sense of joy in God’s presence.

“I suppose one could say I was led by joy”. What a way to sum up your life.