Homily for the Funeral of Br. Kevin Knox 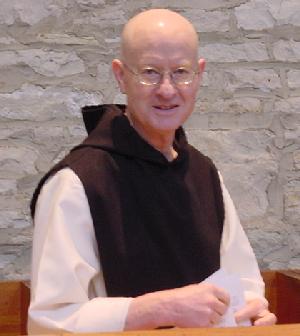 A few weeks ago in a conference to the monks I quoted someone who said, “The monastic soul is governed by hope and despair.” And so is the soul of the speaker in our first reading. “My soul is deprived of peace,” he says, or she, “my future is lost”; but then, “My portion is the Lord, says my soul; therefore I will hope in him” (Lam 3:17-26). “Joy and despair,” says that author I quoted, are at work in the monastery, “whose depths, both horrible and blissful, are unfathomable.” We speak clinically today of manic-depression, of bipolar personalities. If anyone was bipolar, it was the author of that passage from Lamentations, and monks are no strangers to manic-depressive syndromes. Note, in addition, the polarities in the other readings today: not just trouble and peace, Despair and hope, but also, Forgetting, remembering, Buried, raised, Death, life, Darkness, noon. We Christians live in the world but not of it, and for Saint Benedict the monk lives between the light of life and the darkness of death, where he is torn between his own will and obedience to the divine voice, hoping to escape the pains of Gehenna so as to arrive at eternal life. As Steve Cone reminded the monks last week, we, and all Christians, are on a journey from “this world” of falsehood to the eternal realm of truth. We run between poles.  Such is the itinerary of conversion, metanoia, the turning away from self that is the Gospel message, to be shaped by the love of God, its gift. We monks are bipolar personalities by profession and by Creed, manic-depressives, or fools for Christ. 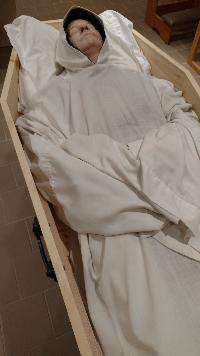 How did Paul come up with the idea of putting together “baptized” and “into Christ,” as if Christ were a pool of water or a vat of chocolate for dipping and coating creamy caramels? We are drenched with Christ, and for Paul, Christ is the Crucified Messiah drenched with his own blood poured out for the many. We are colored with Christ, disfigured by his fluid, marked, stigmatized, and our journey from here to there, darkness to light, and despair to joy, is a Way of the Cross, soaked in his very own mercy and justice.

I was talking to a brother last evening about the strong sense one has that martyrdom is waiting for you. Is it because the Christian who is dying to sin on the one hand and living to God, on the other, is by definition undergoing martyrdom day by day? Br. Kevin wrote annual Advent letters. They went out in the mail.  If he had been 60 years younger, he would have sent Tweets, made Facebook postings, and composed a running blog. Whatever Br. Kevin intended by his letters, they were the story of his trajectory between poles, here to there.

Kevin, we know, served New Melleray mainly both as boss in the muck and wildness of its farm and forests, and director of the predictable, ethereal monastic liturgy. Kevin’s Advent letters taken together are a study in what Michael Casey called wobbleology, life in the interim, Kevin’s personal record of every monk’s living in the monastic meanwhile. When we look at Br. Kevin’s corpse here before us, under the eyes of the Eternal Father who holds his spirit in his hands, we know that his life and ours however long are mere drops in the Ocean of God, less than nanoseconds to the Timeless, for whom, though, each drop is like the tear of a grieving mother, not forgotten or lost, and each second 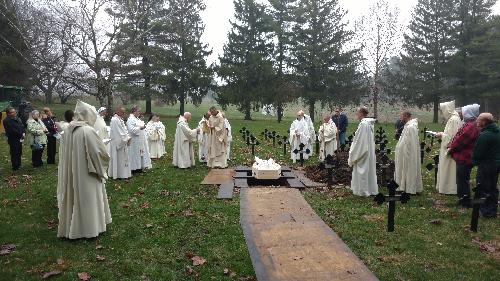 attended like a sonata. “One of the greatest temptations in time of trial,” Br. Kevin wrote in one of his letters, “is to think that God has abandoned us, no longer loves us”— the despair pole of the monk’s life—and in another, “Remember, the ‘end of time’ may occur at any time, and will certainly occur for each of us when we die. O, my heartfelt prayer for you is that you grow in true hope, ready to ‘stand with confidence before the Son of Man’”— the hope pole of our fellow-bipolar brother monk. He speaks our language, as did our Crucified Messiah both in a cry of anguish “My God, my God, why have you forsaken me?” and with a calm hope, “Father, into your hands, I commend my spirit”; “all is lost,” and also, “the mercies of the Lord are renewed each morning.” “Are you unaware,” Paul asks, about our being buried with Christ in baptism. He is not teaching us, but asking us to own up to who we are as Christians, and then decide what we will do about it. Our burial of Kevin’s mortal remains is a ritualization of our reality as Christians now. We are Kevin, but now on the other side: dead to sin, and alive to God, already inhabited by newness of life. “Are you unaware?” What this newness of life looks like— just read again the Sermon on the Mount, about doing to others what we would have them do to us, the parables of the prodigal son, the Good Samaritan, the judgment of the nations, about what we do the least among us that we do to Christ. It was noon, and darkness came over all the land. There was an eclipse of the sun. The greater light is compromised by the lesser, the sun by the moon, though the moon has no real light at all. 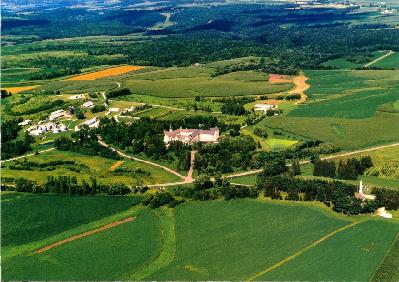 Sometimes despair gets the upper hand over hope. In one of his Advent letters, Kevin asks, “When do I feel the deepest contentment or joy in my life, and what brings it about? And what changes would I need to make in my life to enhance and prolong that contentment, that true happiness?” The contours and turns of our conversion are radically personal. And yet our conversion must be assisted by others in ways seen and unseen, good and upright people, Christians who pray, give example, risk life and reputation for the sake of truth—Joseph took the body, wrapped it in a linen cloth, and laid him in a new tomb. Notice how with that care, the “it” became a “him.” In yet another letter, Kevin comments on New Melleray’s sobriquet, This One Dear Place. “For those of us fortunate enough to live here, it seems a deserved description: it is our one lifelong home, and is very dear. . . . I’ve always been grateful that I entered an Order that allows its members to spend their whole life in the monastery they join. This practice tends to form very solid, cohesive communities, like ancient interlocked oaks in a forest. And since most of our present monks have been here 60 years or more, you can imagine the inner stability of the group!” (Advent 2006). “Joy and despair,” are at work in this One Dear Place, “whose depths, both horrible and blissful, are unfathomable.”