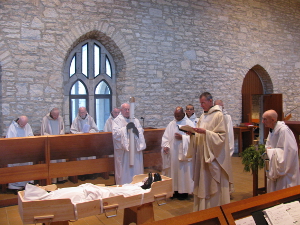 Yesterday we celebrated the golden jubilee of two brothers, Robert and David. Today we perform the burial of another. Yesterday I said that every life is a puzzle, not that it doesn't make sense, but that the sense of it is grasped as the pieces fall into place and a pattern emerges and gets more and more defined. You make sense of your life, too, by the way you put the pieces together, by the way you tell and retell your story.

Fr. Francis was clear about his story. I believe that he put the pieces of his life together intelligently, and also gratefully. He was always in the process of writing it; he had his new Brother typewriter to write it with, and a new photocopier: His mother, his Italian heritage, the Marines, the monastery, the priesthood, Ava, Native Americans, theology in the post Vatican II Church, his life and ministry in Florida since 1984.

Yesterday I mentioned the ferment here in the monastery in the 1960s. Francis was a generation older than our jubilarians yesterday. He was caught in the ferment. As he put it, “monks were leaving right and left.”
In 1968 Fr. Francis became one of those, a “temporary leave”, he called it, that lasted till last April, a 46-year leave of absence.

I don't know if he had ever imagined returning here. About 1984 he writes that his chances of surviving here were slim. But he did return, last April, and with good zeal, good cheer, intelligence, and paced energy he took up the life we had to offer him, the last piece of the puzzle. I think it fit perfectly and all of us were both charmed and challenged by his vital presence.

Francis identified in summary form 17 pieces to the puzzle of his life. That was before he returned here, and so 18, and certainly more than 18. I know the one thing that held them all together was Francis's fundamental motivation, his response to God's love of him in Jesus. I am reminded of something Pope Francis wrote: “united to Jesus let us seek what he sought, love what he loved,” and what is that? “The glory of God.”

“If we want to give ourselves completely we have to push ourselves beyond every other motivation. This is the definitive motive – the glory of the Father that Jesus sought throughout the entire course of his life – it is the explanation and the meaning of everything else.” I know this was true for Fr. Francis. At least in intention, the love of God and the glory of the Father were the meaning and rationale of all his life.

In one of his sermons Saint Bernard invites his brothers occasionally to stop their incessant and usually anxiety-ridden pondering over themselves and to dwell also on the memory of God's loving-kindness. How can you give thanks to God if you lose sight of those things for which thanks are due? I think Fr. Francis found this key of gratitude that pulled the threads of his life into a unity. I think he lived the reality of these words of Pope Benedict: “Christianity is not a code of ethics or a grand idea; it is the encounter with an event, with a Person, that gives your life a new horizon, and so a decisive direction.”
I believe that in Fr. Francis's joy and courtesy we met something of the Risen Christ.