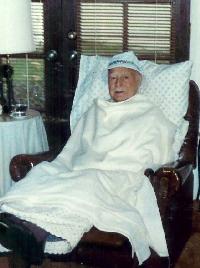 “God will wipe away every tear from our eyes, and death will be no more, nor mourning, nor sadness, nor pain any more, for the former things have passed away” .

“Father, I want those you have given me to be with me where I am” .

Today these desires of Christ are being fulfilled in Dad! He has died. Now he experiences no more crying, no more pain, because he is alive to things he could not experience before: he is seeing God in all His glory, and he is being filled with the love of God lifting him into an ecstasy of happiness. He has inherited a whole new creation which will never end. There is only one thing for which he is still thirsting. It is a desire which he expressed to me in a letter on my birthday back in 1974. He wrote that “a father’s greatest wish is for the salvation and happiness of every member of his family.” And may I expand that by adding the words.” and for everyone that he has known and loved.” He is thirsting with the same thirst expressed by Christ: “Father, I want those you have given me to be with me where I am. 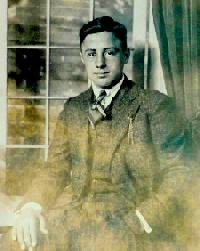 Dad found joy in making others happy. His gentleness and sweetness have rubbed on to all of us in such a deep way that we can still feel that goodness of his, and every time we feel it we can say: “That’s from Dad!”

When he was a young lad his mother saw a sign in the window of a Rock Island State Bank saying “Boy wanted.” She immediately looked for her son and returned to the bank, went inside with him and said, “Here’s the boy you’re looking for.” Even though the job paid only half of what Dad was already earning as a carpenter’s assistant he took the new job to please his mother. And over the years he did well. By the 1930’s he purchased a controlling interest in a group of five county banks in Iowa and Illinois; he moved to Grand Mound, Iowa, where he and a partner operated the Grand Mound Bank. He was doing his very well. 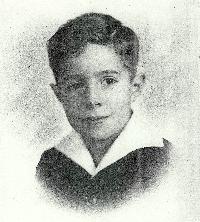 Once when I was earning money by cutting lawns in seventh grade, I received a letter with a bonus check of 10% from one of my steady customers for doing such a good job of mowing and gardening around his house. With pride I showed the letter to Dad and he rejoiced with me saying, “Always do your very best at whatever you are doing. You will be pleasing to others and you will be pleasing to yourself.” He had already taught me that by his own example. In fourth grade I wrote him a Father’s Day card saying: “I only hope that I can be half as good as you are.” So, when I feel an urge within myself to do my very best, I say, “That comes from Dad.”

He loved us. Making others happy gave him joy. He worked hard. In 1937 he took over the trusteeship of Pointer Brewing Co. in Clinton, Iowa. In 1939 he became vice-president of the Mankato, Minnesota, Brewing Co. By 1942 he was president of Keeley Brewing Co. in Chicago. And in 1946 he became president of Blatz Brewing Co. in Milwaukee. One of his joys during these and following years was an annual family vacation in northern Wisconsin, for fishing, swimming, and fun. 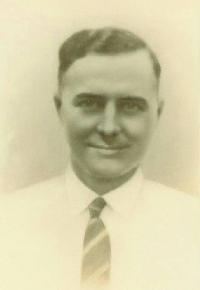 I remember one night when he was taking us all to a movie that I began to pout because we weren’t going to see one in which Bob Hope was the star. But Dad bent down to me and said with gentleness and sweetness, “Tonight were going to a movie that your mother wants to see.” Then I realized how much he loved her and that he was teaching me to join in doing things that would please her. “That’s Dad!”

Because Dad loved he also suffered. In 1948 Mom died. He was only 46 years old. If Dad had been a hard man he might have broken under such a blow, as cast iron breaks when struck by a hammer. Instead his gentleness and goodness had the strength of fine leather which only becomes more pliable and soft to touch when it is struck with hammer blows. I remember the tears he shed as the family prayed the rosary by Mom’s bedside during her long illness. We all cried. But in the days and years that followed I found comfort in his smiles, his jokes, his storytelling, and his love of simple things like ice cream. Remember how he would say, “I scream, you scream, we all scream for ice cream” Yes, that’s Dad! 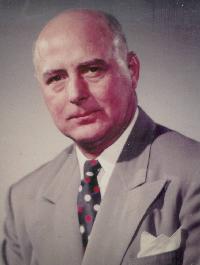 There is one sacrifice Dad made which I will always remember. It was the day he drove me to New Melleray Abbey. As the Abbot took us on a tour of the buildings Dad was continually wiping away tears from his eyes. He wanted me to be happy in life and he gave me the freedom to pursue it in the way I desired rather than in the way he desired. When Dad returned home I later learned that he was sick in bed for several weeks from the experience of that sacrifice. This is one of the greatest lessons in true religion that I have ever had. Like Abraham, he was willing to give up a son; but Isaac was spared and Abraham received him back. I was not given back. Dad’s heart was not spared. For years to come tears filled his eyes and he would renew his sacrifice because he loved God more than himself. It really was his love for God that was at work in his sacrifice. Many years later he wrote this to me: “If I were to ask to name the most important event of success in my life it would be your decision to become a Trappist. I say this, Steve, because each day, more and more as I get older, I am aware of this great blessing bestowed upon me.” In Dad’s humility, he saw this success in terms of my decision. But I see it, and I believe God sees it, in terms of his decision to sacrifice his desires because he loved God more than his own flesh and blood. That was his greatest success, and God blessed him abundantly for it. He loved God. Now God has called Dad back to Himself and is pouring blessings upon him pressed down, running over, and flowing into his lap. God asks us to set our desires aside, to let Dad be where he most wants to be, to let Dad be happy now forever. 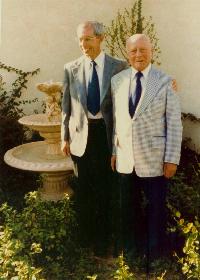 Not long ago, when Dad was in the hospital, he had a vivid impression one night that his mother was coming to take him home. He even got up and dressed and was waiting for her. I don’t think it was an hallucination. I believe he really saw her, but didn’t realize “going home” meant going to heaven. The coming was delayed awhile but last Tuesday Dad was ready. Slowly, peacefully, he quietly stopped breathing. I believe that our grandmother was there to meet him and that she took Dad by the hand and led him before our loving God and Father and said, “Here’s the boy you’ve been looking for!”

(Note to the community of New Melleray) Thank you for your prayers on behalf of my father and for my family. He had a beautiful and holy death. The funeral and burial were a moving and painful experience for all of us, and yet I wouldn’t want to change it, or wish he hadn’t died. He was ready and willing. He had the best of care during his last illness and was without serious pain. I feel that God blessed my family with the gift of an exceptional father; my heart is full of gratitude to God for such a kind and loving father. Yet, because my love for Dad has been so strong, the experience of his death has caused me many tears and left me feeling more fragile than I ever expected. But it is a happy loss because of his gain. My tears of love are mixed with the joy of knowing his life was so full of goodness and that now he is now really at home and waiting for the rest of us to be there with him!