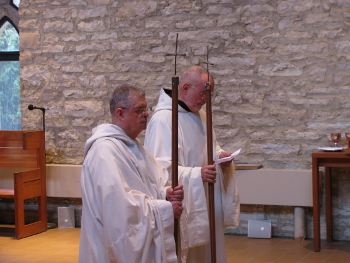 It was on this day in 1964, the solemnity of the Immaculate Conception, that our two brothers Robert and David made their profession as monks of New Melleray according to the Rule of Saint Benedict. This is their Golden Jubilee, the 50th year, of their profession.

Someone might ask, “What connection is there between the Immaculate Conception and the fifty years of monastic life of these two brothers,” and someone else might guess, “Uh, they're both mysteries?”

Well, there's something to be said for that answer. As a monk goes along in this life he sees that the choice made back then is a mystery, his life a puzzle. It is not that his life hasn't made any sense. Certainly, in the course of 50 years there are stretches of time when nothing makes sense. But a puzzle does make sense; it's just that the sense a puzzle makes emerges gradually and only with the persistence and dedicated attention of the one putting it together, in this case the monk himself. There are wrong guesses, falls steps. But, with persistence and attention, a pattern does begin to emerge. When you notice the pattern, you get a hint of its beauty; then there is less guesswork and, as they say, “everything begins to fall into place.” I think both our brothers can say that now about the mystery of their vocation, as Mary learned to enjoy the beauty of the Mystery of her Immaculate Conception, something she always was, but the uncanny effects of which for long must have seemed to her only an insoluble puzzle.

We can answer the question another way. “What connection is there between the Immaculate Conception and the fifty years of monastic life of these two brothers?” I think it is what Mary will say in the Gospel: “The Almighty has done great things for me, and holy is his name.” The mystery of the Immaculate Conception is the mystery of Grace in the life of an individual: Hail, full of Grace. But this is what monastic life is. The life of a monk, the life of David and the life of Robert, is a discreet history of Grace, an instance of God's beauty in the cosmos. In that sense the life of a particular monk is irreducibly precious. The same can be said, of course, for every Christian and really for every creature. But a monk is one who intentionally and publicly has said yes to this truth, has said that this truth of being a personal history of grace in the world will be the entire purpose of his life. So a monk's life carries a great deal of weight, for on it hinges an unrepeatable manifestation of God in the history of the world. He chose us before the foundation of the world to be holy and upright before him all the days of our life.

The fifty years of Robert's and David's monastic life corresponds exactly with the Church of the Second Vatican Council. The council began in 1962, just the time when our two brothers were novices. It ended in 1965, when they were in their first year of monastic profession. It was a time of both confusion and hope in the Church, in the Order, in this monastery, and in the personal life of almost every monk here then. I have no doubt that both Robert and David were caught up in the ferment of the times, Robert, for instance, on the liturgical front where the battles could be mortal and David in the unenviable position of leadership at a time when all authority was being met with ironic condescension if not entirely dismissed as irrelevant. They saw many of their fellow monks undergoing painful personal and vocational crises during years of the Council and immediately following. To make monastic profession in that climate, and to persevere in that resolve – “do not disappoint me in my hope” – was risky, some would have said foolhardy.

So I am struck by this observation of Dom Christian de Cherge, prior of Atlas. On the occasion of Br Michael's profession in 1991 Christian said, “Profession is not something that happens in time; profession binds us to eternity.” We come back to the question, “What does monastic profession have to do with the Immaculate Conception?” The Immaculate Conception is an act of eternity in time; it is the Spirit of Life in human biology. This is not incredible because it is an article of faith, but it is impossible. It is the divine impossibility finding entry through the door that human possibility opens up to it. Monastic profession with their fifty years of attempting to be faithful to it is the door in time that David and Robert opened up to the impossibility of Divine Eternity.

Pope Francis talks about a Christian's “sense of mystery.” The sense of mystery is our “certainty … that God is able to act in every situation, even amid apparent setbacks.” All our acts of love, all generous efforts, all pain, “encircle our world like a vital force.” “Sometimes,” says Francis, “it seems that our work is fruitless, but” our life in Christ and our brothers' fifty years of monastic dedication “is not like a business transaction or investment. … It is something much deeper that escapes all measurement. … We entrust ourselves without pretending to see … results. We know only that our commitment is necessary” (EG 279).

Dom Christian says, “every [monastic] profession refreshes and calls forth again that of the seniors, just as it anticipates and prepares for that of the juniors.” Thank you, David and Robert, for calling us again, for inviting us anew, for the example you continue to give. “Let us learn to rest in the tenderness of the arms of the Father in our creative and generous commitment,” says Pope Francis. “Let us keep marching forward; let us give him everything, allowing him to make our efforts bear fruit in his good time.”