Homily for the Funeral of Br. Raymond Sullivan

Homily for the Funeral of

I think you could say the two most important days in the life of a monk are the day of his solemn profession and the day of his death. Both are new beginnings. Br. Raymond began life as a solemnly professed monk on February 2, 1954. He began his eternal life with God on January 6, 2004.

He died as he lived — quietly, peacefully, gently. Last Tuesday morning he received communion at the 10:30 Mass in the infirmary chapel, and just before noon Br. Paul spoke to him, left to get his lunch and when he returned, Br. Raymond had died quietly sitting in his chair. This was so beautifully Br. Raymond. He never wanted to bother anyone. He never wanted special attention. He was retiring, even shy, but he was a true gentleman, always kind and very appreciative of anything done for him. He was the gentlest monk I have ever known. Everyone entering the monastery has a gift to bring to the community. Br. Raymond’s was his gentle way of living among us, ever faithful, ever willing to help. He was somewhat self-conscious and shy, but totally unselfconscious and even unaware of his virtues and holiness of life. That is what made him so real. Right up to his last days he wanted to live his vow of obedience. In all simplicity and humility he asked me if it was permissible to have a “do not resuscitate order” in his last illness. He said he read in the “Catechism of the Catholic Church” that you didn’t have to take extraordinary means to stay alive, but he didn’t want to make that decision himself. He wanted to do it under obedience. He was truly “obedient unto death.” 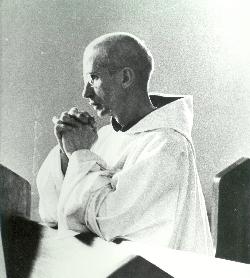 When a monk dies, the cantor usually chooses the reading for the funeral Mass. Br. Kevin chose the readings today with Br. Raymond in mind. As you can see, there are several similarities between the readings and Br. Raymond’s life. But as I was looking over the 1st reading, I stopped at the words, “At the time of their visitation . . . they will judge nations, rule over peoples . . .” I wondered how these words fit Br. Raymond. I can’t see Br. Raymond wanting to rule over peoples, or judging nations. But then the next sentence says, “ . . .and the Lord will be their king forever,” (Wis. 3:7-9). Br. Kevin had no way of knowing how well these words fit Br. Raymond. 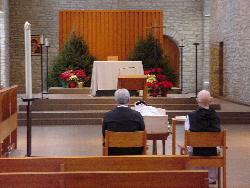 Some years ago we viewed a movie called “Return to Bountiful.” At key points of the movie a hymn was subtly inserted into the drama. The hymn is entitled “Softly and Tenderly.” Br. Raymond was taken with the hymn and told me he would like to have it sung at his funeral. The first line goes like this, “Softly and tenderly Jesus is calling, calling for you and for me.” About a month ago when Br. Raymond was in intensive care, we didn’t think he was going to live. The Gospel at Mass that day was the blind man of Jericho. He calls out as Jesus is passing by. The crowd tries to silence him but then the word comes, “Jesus is calling you.” I thought of Br. Raymond and this hymn. Since then I have noticed very often in the Gospel stories the words, “Jesus is calling you.” These words could be a theme for anyone’s life. Jesus is calling each of us in so many ways, so many mysterious ways. At every turn of events in our life—at every trial and difficulty—at every joy and accomplishment, Jesus is calling us—softly and gently.

Today we celebrate the life and death of a man who listened carefully to that call and answered as best he could. All he asked was to “qualify for a life of praise for Christ, the King of Kings.”