It is 1958 Xav and I are walking out to the farm yard for work, it was the era of sign language and I made a sign to Xav, “How long have you been here?” He held up 8 fingers, wow, I thought, 8 years that’s a long time. It was a long time for me who was in the monastery all of three months at the time. Eight years seemed like an unattainable length of time to me. Who would think that 63 years later we would be gathering here to celebrate the life and death of Fr. Xavier.

First of all, I want to offer my condolences to his sister Kathy and the 50 or so nieces and nephew cousins and in-laws who have come from all over the nation to be here to honor the memory and celebrate the life and death of Fr. Xavier Dieter, and to congratulate you. All of you have contributed to making Xav the man and the monk he was. All of you, the monks and nuns, his relatives and his retreatants, the AA groups who became lifelong friends, the neighbors he knew so well and loved. You look at the divergent groupings of people here and you have to ask what the common denominator among us is? The answer is love. Xav had a way of conveying his love for everyone he knew. It was the grace of his vocation and the grace of his family life. He left home when he was 20 years old but the love he experienced in those 20 years, and I can say the same about his brothers and sisters, stayed with him all his life. 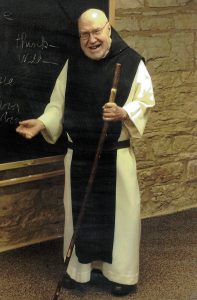 Joining the monastery in 1950 must have been hard for Xav. There certainly where no parties, not even much talking, and being on time was essential. Every couple of hours the monastery bell would ring calling us all to the church for prayer. Xav did it all, especially in the last year of his life he never missed our vigil service at 3:30 in the morning. I found it so inspiring to see him making his way into church with his walker that it kept me going. Xav had to go against the grain for certain aspects of monastic life and one of these was the demands of time. I know from experience that time did not exist for the Dieter family, well maybe not that drastic but put it this way they did not let time get in the way of a good time. An example and I hope Kathy does not mind me using her wedding to prove a point. I have not been to many weddings but I understand there can be a lot of stress right up to the day and hour of the ceremony. Not for the Dieters. Kathy’s wedding was supposed to start at 2 in the afternoon. I think it actually started at 5!  Xav wore sort of a chasuble made by the students that Kathy was teaching at the time. They all wrote something on it and it was the most inexpensive chasuble and the most meaningful one I have ever seen. After Mass we had the reception in the guest house dining room with singing and dancing and dancing and dancing. Fr. Joseph Knapp, who was a pretty strict monk at the time, was dancing with Xav’s mother. I danced with every one of his sisters. We ran low on champagne and I asked Br. Gerard to go to town for more. He left and never came back! I think I saw the Dieter family at their best and to this day love them all. 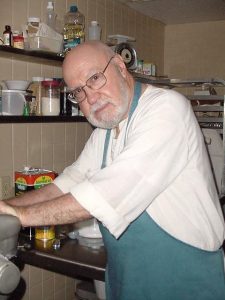 Xav was a monk for 72 years and he stayed the course through all the ups and downs of those years. He took the first steps of this journey on March 21, 1950 when he said in a letter to the novice master how grateful he was to be accepted into the community and that his mother and brother would be driving him here arriving about 3:30 in the afternoon. He died on March 3rd 72 years later about 3:30 in the morning.

Xav sort of resurrected a long tradition going back to the very early days of New Melleray. We were founded by monks from Ireland in 1849 and the monks then would sometime help the BVM sisters milk their cows at the mother house about 4 miles from here, in turn the sisters mended the monks robes. Then some 20 years later Fr. Bernard McCaffery used his medical skill to help the community around Garryowen parish, in return the pioneers named their town after him, Bernard Iowa. Br. Placid Harrigan did the same for Placid Iowa.

There are no towns named after Xav but he lives in the heart and memory of many, many people. He has completed his journey – a journey we can all recount and see all the good he did. But there was another journey going on and that we cannot see. The foundation on which Xav’s life was build was his union with Christ. This is what sustained him in his everyday monastic life. Without this he would never have persevered for 72 years. We are all on this journey through life, we call it a journey leading us to God or better God leading us to Himself.

There are two dimensions to this journey, one you can see the other is invisible. I could see Xav struggling to make it to Vigils and be inspired by it but I could not see the inner life that made him want to do that. We like to think that we are on a journey to God but the saints say it is a journey into God which is a total mystery.

At death our being and God’s being will not experience the distance we now have, but there will be a union of being, a union of love, a union of friendship between creator and creature. We are after all made in the image and likeness of God and our whole life is spent in becoming who we are. Finally one being in Christ and by extension one being with all creation. Xav now enjoys that union and he who lives in God will not forget us who are on the same journey he completed. Death is but the beginning and an unveiling of what was vailed – the vail is lifted and we will know as we are known.