Memorial of Blessed Gerard of Clairvaux

Homily for the Memorial of Blessed Gerard of Clairvaux 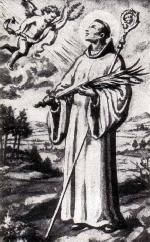 Today we celebrate the memorial of Blessed Gerard.  The sixth abbot of Clairvaux, was a very strict disciplinarian.  During a visitation at Igny, a daughter house of Clairvaux, Blessed Gerard was murdered in 1177 by a rebellious, disobedient monk named Hugh, whom he had threatened with punishment.  Blessed Gerard is counted as the first Cistercian martyr.

St. Bernard’s brother at first refused to follow him  as a Cistercian, preferring the life of a soldier. The other Gerard followed St. Bernard’s footsteps so closely he became abbot of Clairvaux.  But he didn’t learn how to have compassion on the weaknesses of his monks the way St. Bernard did, so he was murdered by one of them.  St. Bernard’s older brother was nearly killed as well, wounded in battle, imprisoned, and miraculously set free as St. Bernard predicted.  After his escape from prison he went straight to Clairvaux and became St. Bernard’s closest confidant and assistant.

In our Cistercian calendar both Gerards are celebrated as saints.  But one was feared as an abbot, and the other was loved as a brother and monk.  Is one to be preferred to the other?  In chapter 64 of St. Benedict’s Rule for Monasteries on the Choice of an Abbot, we read, “Aim, rather, to be loved than to be feared.”