Memorial of Charles Lwanga and Companions

Homily for the Memorial of Charles Lwanga and Companions

When the White Fathers introduced Christianity into Uganda, the king was only 18 years old.  He was an alcoholic and addicted to sexual relations with boys.  After he discovered one of them being taught the Catholic faith he was so enraged that he drove a spear through the instructor’s neck. Then he demanded that the Christian boys renounce their faith. They wouldn’t do it.  So, on June 3, 1886, he ordered them to die by fire.

Charles Lwanga, a young leader who had protected the boys, was the first to be martyred.  He was fastened to a pyre of wood under which the fire was kept low.  He prayed quietly while the fire slowly did its work.  Just before the end, he cried out, “Oh, my God!” and died. 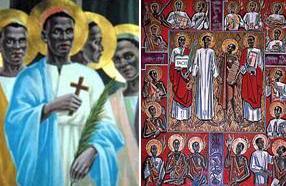 Then all the boys were stripped and wrapped in bamboo mats to be burned alive.  Afterwards, one of the executioners said, “We have killed many people but never such as these. There was not an angry word.  All we heard was the soft murmur of prayers on their lips.”  That day thirteen Catholics, eleven Protestants and eight catechumens from ages 13 to 25, were martyred.

One of them said prophetically, “A well that has many sources never runs dry.  When we are gone, others will come after us.”  Within four years, the number of Christians there had grown to over 10,000.1

Do you fear martyrdom?  I do, but it helps me to remember that the grace to die for our faith isn’t given to our imaginations and fears about a future martyrdom, it is given to strengthen our wills if and when it actually happens.  We will not be alone.  Christ will be with us.

1. Bert Ghezzi, “Voices of the Saints”

Memorial of Charles Lwanga and Companions

Homily for Memorial of Charles Lwanga and Companions 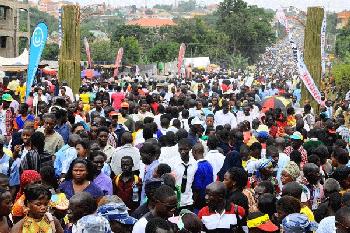 Today is the feast of the Uganda Martyrs.  Even though Northern Africa was one of the earliest homes for Christianity, the interior of the continent had not been evangelized until modern times.  Missionaries first entered central Africa in 1879.  Only seven years later newly baptized Christians, ages 13 to 30, were persecuted and died for their faith rather than give in to King Mwanga’s immoral desires.  Following in the cruel footsteps of his father who secured the throne by burying alive his own brothers and half-brothers, all sixty of them, King Mwanga sentenced 45 boys and young men to be wrapped in bamboo and burned to death.  Then he expelled the missionary White Fathers from his country.  The remaining Christians secretly carried on the work of evangelization.  Without priests or sacraments they courageously kept the faith alive.  After the King’s death twenty years later, the White Fathers returned to Uganda and found five hundred Christians and one thousand catechumens waiting for them. 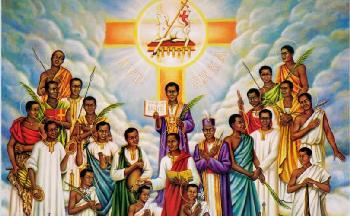 Today millions of pilgrims celebrate this feast at the Martyrs’ Shrine.  They walk from distant lands for weeks under the hot sun to honor the young martyrs who gave up their lives rather than betray their love for Christ.  It is a happy day in Uganda, celebrated with joyful dancing, beautiful choirs, enormous processions and a magnificent High Mass.  It is even a national holiday.

This is what happens when we testify to the truth like the apostles by the way we live, proclaiming the Kingdom of God and teaching the whole world to love our Lord Jesus Christ.