Memorial of Paul Miki and Companions

Homily for Memorial of Paul Miki and Companions 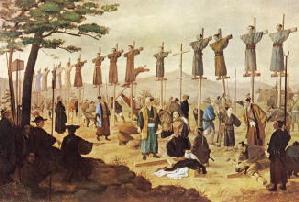 Martyrdom, like that of St. Paul Miki and his companions, is not unique to Christianity.  It has been a distinguishing mark of Jews throughout history.  One can even say their lives are a preparation or training for martyrdom.  In Jewish literature the executions of nearly six million Jews during World War II are called martyrdoms, because they were persecuted for being Jews.

Martyrdom reached its highest summit in the crucifixion of Jesus, God’s supreme act of love for sinners.  Martyrdom is not unique to Christianity, but Christians do bring something unique to martyrdom, that is: love of the persecutor. The youngest of St. Paul Miki’s companions was a boy named Louis, only 10 years old.  As he hung on his cross, the executioner promised to free him if he would deny his faith.  But young Louis replied lovingly, “It would be better if you yourself became a Christian and went to paradise with me.”