Homily for the Memorial of Saint Augustine

Reflecting on our Visitation, I played out in my imagination this scenario: It is Christmas, 2028, and the community of New Melleray is being rocked by an influx of vocations. Imagine: 4 Novices and 9 men in Temporary vows, average age 36! Monks are, one after another, replacing lay workers at Trappist Caskets. On Sundays, a Schola of seven monks sings pieces by Palestrina in 4-part harmony at Communion. Meanwhile, the Procurator, age 40, is completely overhauling the temporal administration of the monastery with one lay person after another losing their jobs. Lay-offs at Trappist Caskets are making workers so tense that Bro. Joseph, approaching 80, has been enlisted as mediator and peace-keeper. Meanwhile, the Procurator, with a solid one third of the monks supporting his reforms, is doing daily battle with the other two thirds of the community.

New Melleray Abbey, in 2028, is thriving though one or two monks have commented that, 15 years ago, when 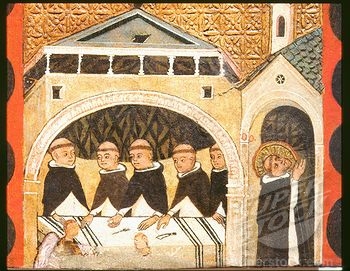 the community was comprised of 25 mostly elderly monks, we may have been a little more focused on heavenly realities, whereas now, the community, having reclaimed its vigor, seems more focused on the concerns of this world: relations with employees, liturgy battles, and warring factions between monks in the prime of life. But, so what, others say? Our monastic family is reproducing, and reproducing is the key to survival. I guess there’s nothing wrong with survival. An individual person may be called to celibacy, but a community is by nature supposed to produce lots of children, everyone knows that. So what if our community is a little more worldly than we used to be? What kind of community is not interested in survival?

But, we know the first Christians were viewed by their Roman contemporaries as being just this kind of community: practicing a new religion with a curiously stringent attitude toward sex, and most strangely, some of whose members vowed to remain celibate and never have children. 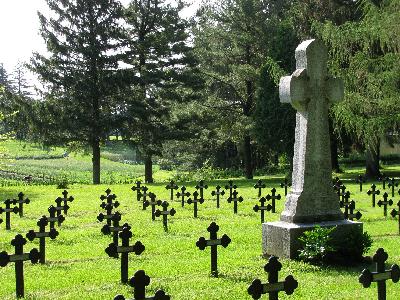 This at a time when society was exposed to death in a way we can’t imagine; when the average life expectancy of a person was less than twenty five years. The idea of taking a vow never to have children seemed outrageous obscene. It was suicidal. This extreme disconnect between the assumptions of Roman society and the followers of Christ was what St. Augustine, whose memorial we celebrate today, addressed in his great work “The City of God”.

The City of God is not measured by success, the exercise of worldly influence, or even survival. St. Peter’s basilica in Rome is a monument to a Messiah who didn’t survive and who, has subsequently, exercised considerable influence in the world. Must a monastery survive to exercise an influence? What exactly would such “survivors” be witnessing to? Might such “survivors” be those Jesus refers to as “building tombs for the prophets?” I might suggest a pertinent theme for our community’s visitation could be survival. Jesus spent a whole night sweating blood – and survived, but did not thereby accomplish our redemption. That happened the following day. Is it our aim simply to survive? Or are we men called by God to survive the way Jesus did?