Homily for the Memorial of Saint Cecilia

One of the oldest musical institutions in the world today is the National Academy of St. Cecilia in Rome, named after the saint whose feast we are celebrating, who had a special talent and love for sacred music.  Saint Cecilia is one of the seven women whose names are included in the First Eucharistic prayer of the Mass.  Centuries after her death nature itself witnessed to her sanctity when her body was found to be incorrupt during renovations of the Church of St. Cecilia in Rome, first in 821 and again in 1599.  She’s the first of all the saints whose bodies suffered no decay.  Her life and martyrdom so inspired the English poet, Chaucer, that he told her story in his most famous work, The Canterbury Tales.  What is her story? 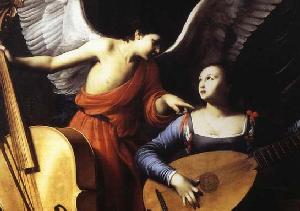 Cecilia was born of pagan parents, into a wealthy Roman family, around the year 200.  They didn’t object when someone asked to raise her in the Christian faith.  As a youth she decided to make a vow of virginity and to ask angels for protection.  Her parents paid no attention to her superstitions.  Against her will they gave Cecilia in marriage to a pagan named Valerian.  On their wedding night Cecilia warned him not to consummate the marriage because she was guarded by an angel of God who would slay him on the spot if he tried to do it.  Valerian was intimidated but not convinced.  He asked to see this so called angel.  She said he would see, if he first accepted Baptism.  And to his astonishment that’s what happened!  Valerian in turn converted his brother and the three of them became generous benefactors of the poor in Rome, caring for Christians and burying the martyrs.

Many people were being converted to Christianity until the brothers were seized and beheaded.  Cecilia was also taken and given an opportunity to save her life if she would worship pagan gods.  She refused.  Her courage even inspired Roman soldiers to

embrace Christianity. That was intolerable, so Cecilia was sentenced to a cruel death by roasting in an overheated bathhouse.  But she suffered no harm at all, like the boys in the red hot furnace of Nebuchadnezzar.  So the judge ordered an executioner to behead her.  With all his might, after striking her three times, he only succeeded in cutting part of her neck.  For three days this beautiful young woman, a consecrated virgin and now a martyr slowly bled to death, praying all the while for her fellow Christians and exhorting them to be courageous and persevere.  Today we ask her for the grace to do the same.